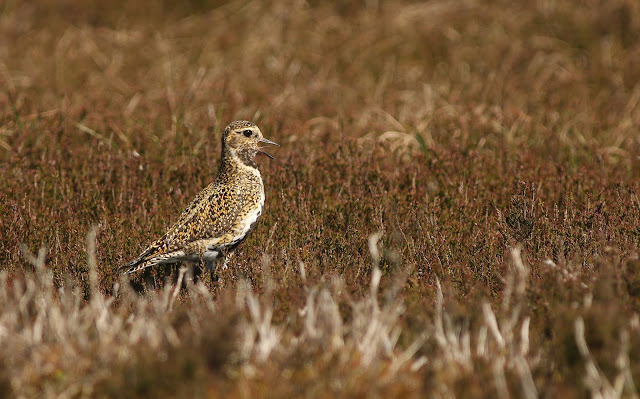 April saw the beginning of a long and fascinating season surveying the breeding waders of the North Yorkshire Moors. Again with comrade Rich, we spent a lot of time up on the most remote parts of the moors over the spring and summer months, and by the end of the contract, I'd conducted 54 surveys up there, providing many valuable insights (and some serious exercise).... 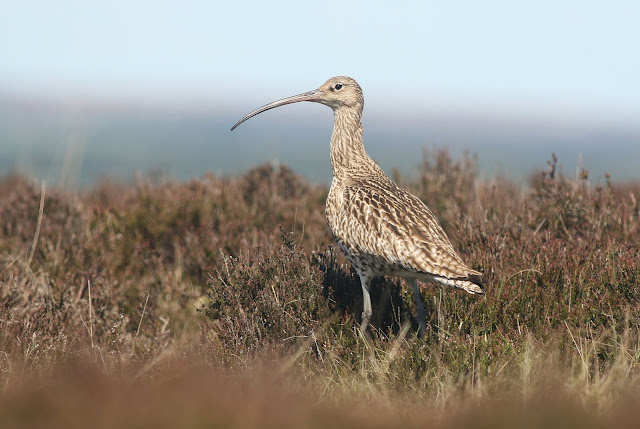 We recorded effectively everything, but our target species were European Golden Plover (top), Eurasian Curlew (above), Northern Lapwing (below) and Common Snipe.

As with pretty much any survey - and especially those where you routinely find yourself in remote situations - there was plenty of collatoral to enjoy, from breeding Merlins, to smart Emperor moths and gorgeous Adders (below); of the latter, it's impossible to tire of these beautiful beasts, and I had some memorable run-ins with them this summer. 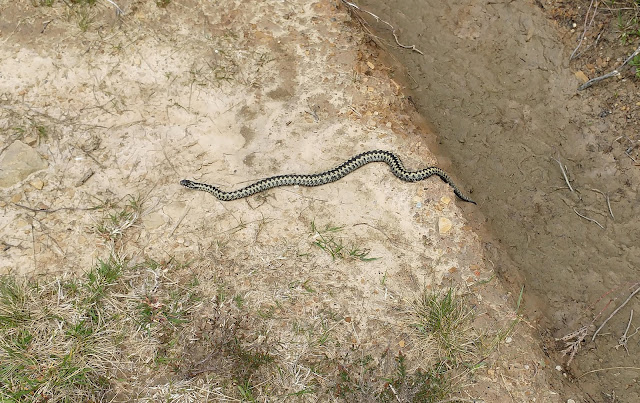 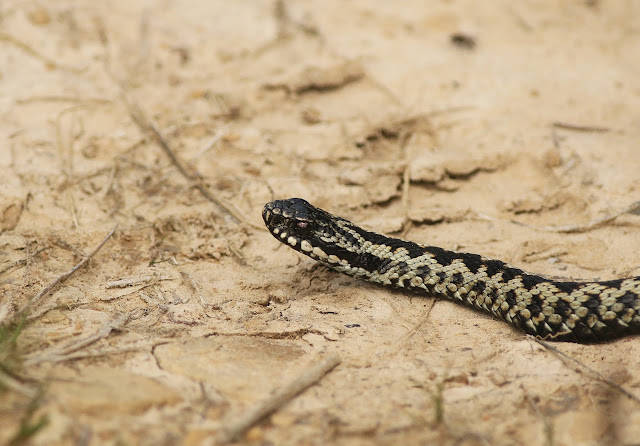 Spring and summer isn't just about surveying birds these days - plenty of late evenings (and a few very early mornings) were again spent looking for and monitoring bats, again as part of Wold Ecology's team. Sites, species and surroundings were rich and varied, and no two nights were the same; some were a real privilege to experience, often involving my personal favourites, Brown Long-eared Bats. 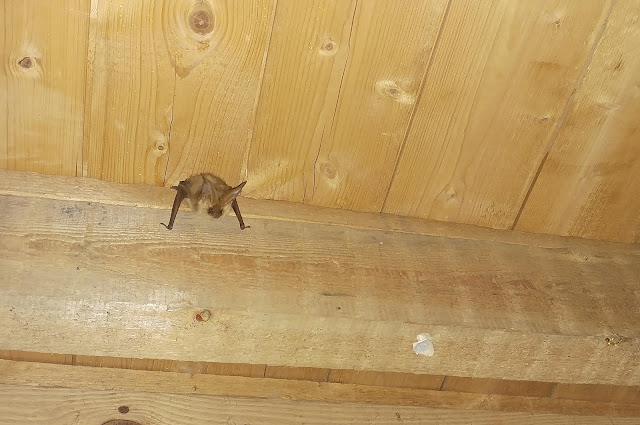 Birding on the coast was sketchy, regarding both time in the field and relative returns; long gone are the days when I could justify numerous day-long shifts sniffing out everything with feathers and a pulse in spring (and to be honest, that's no bad thing), but I'm still fortunate enough to be able to reshuffle some of my workload and maximise at least some time in the field when the conditions look promising. It's all relative, I know, and yes, I do appreciate how lucky I am... 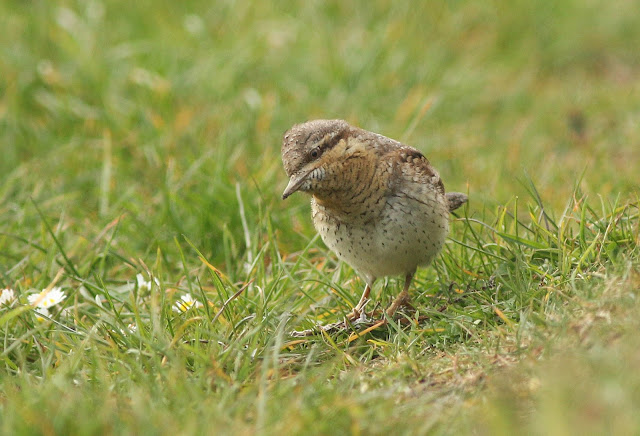 Inkeeping with the last few years, I spread the spring birding love more holistically and satisfyingly again this spring (the days of über-insular patch-induced mania are also happily long gone), with Filey, Flamborough and elsewhere within realistic striking distance on the table for those generally at-a-premium days of seasonal promise. I even twitched a few decent birds within a half hour or so - what have I become? (A little less insane is the correct answer, in case you were wondering...). 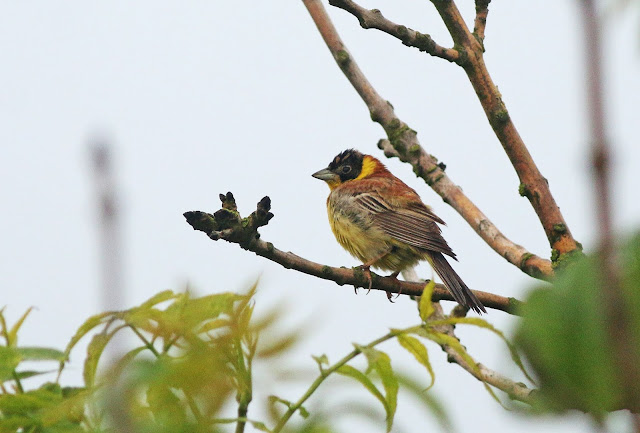 In truth there were't too many days that hit the spot on the coast, but a couple spring to mind - a fine day of quality and quantity at Flamborough in mid-May, and another there right at the end of the spring migration season were particularly enjoyable; one of several Wrynecks and Black-headed Bunting (both pictured above) being two species featuring in the above links, as well as a decent sprinkling of Redstarts this spring (below). 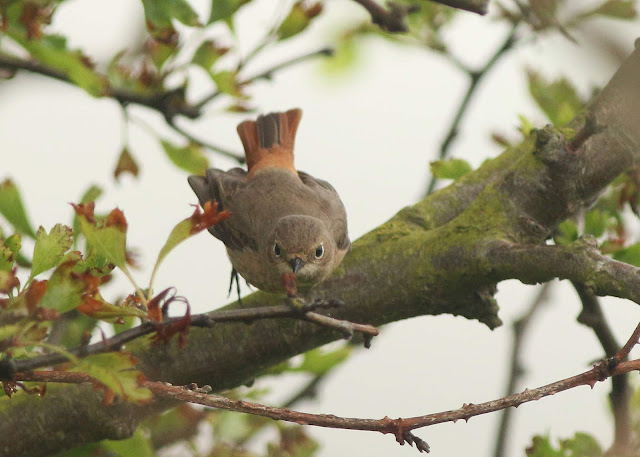 As well as all the above, in May I stepped down as (volunteer) Communications Officer for Filey Bird Obs. After a productive seven years or so at the helm and a lot for us to be proud of, ultimately it's important to realise when those efforts are better directed elsewhere to make the most of those spare hours and skills. A more detailed summary can be found here. 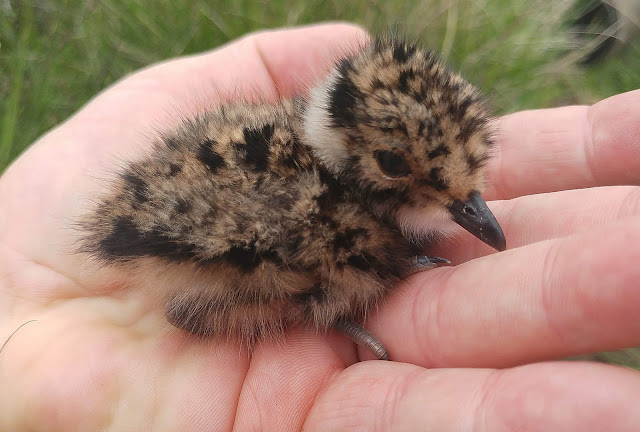 More importantly, I got to spend my wonderful wife's 40th in the Czech Republic with her and my lovely in-laws - and I didn't even take the bins and camera! New-found levels of perspective and self-control abound.... 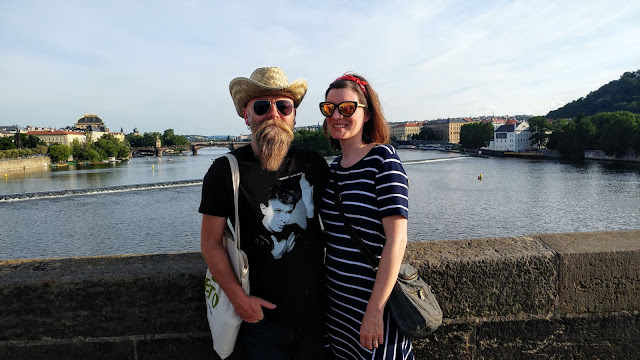 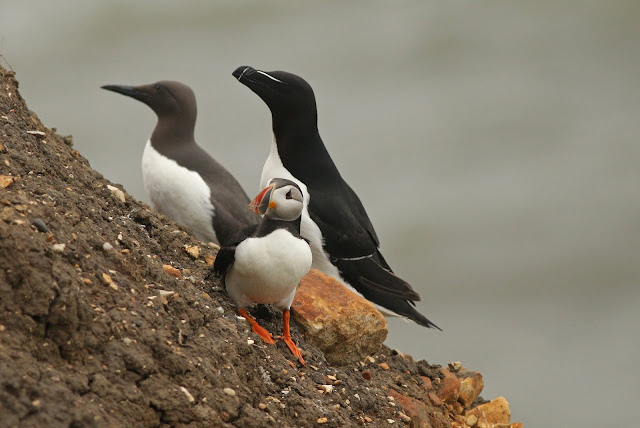 Posted by Mark James Pearson at 15:11


And so, by mid-March on a particularly dark, cold and damp Yorkshire coast, we were all set for three weeks in Israel.

The two wonderful flagship events we were fortunate to be involved with - Champions of the Flyway (COTF) and The International Bird Observatories Conference (IBOC) - ran concurrently in Eilat, and involved not just an intensive (but enjoyable) work schedule but also a lot of fine, fine people; and of course, some great birds and birding opportunities.

Of those fine people, well there were too many to even think about namechecking, but catching up with dear friends from the international birding and conservation communities, and forging many new friendships while reinforcing existing ones, is just about as good as it gets - it's hard to imagine any other circumstances where one could feel so at home and at ease, and so fully topped up on the psychological / philosophical fuel that is so essential to navigating the more mundane day-to-day trials of modern life.

It's hard to oversell just how affirming and dynamic these two incredible events were, but being part of so many diverse and genuinely inspiring people from across the planet coming together and joining forces is a special privilege, especially when that community becomes so much more than the sum of their parts.


And then there were the birds.... I managed a blog post a day (well, when I got back) and they can be accessed chronologically by starting here and then clicking on 'newer post' at the end of each piece. (Alternatively, check out the monthly collections here and here).

Of those birds, well, as I'm now privileged to confirm, early spring in Eilat is always a glorious kaliedoscope of migration, and it was another memorable birding adventure; positioning yourself smack bang in the middle of one of the busiest bottlenecks bridging the African and Eurasian landmasses in peak migration is, well, not dull....

Back home for the second week of April, and the survey season was about to kick in - more to follow. 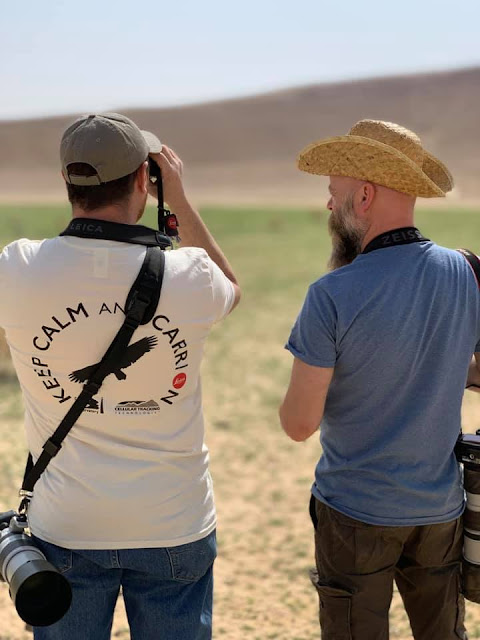 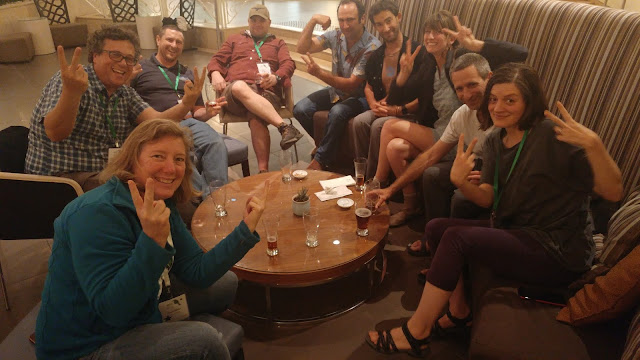 Posted by Mark James Pearson at 11:40

After a frenetic end to 2018, January began (and continued) with a busy winter talks programme, kicking off with a week of speaking for RSPB groups and local Nat Hist societies in London, and continuing across various points in the North. Of the latter, a memorably weather-affected adventure out West - incorporating talks for the Lancaster & District Birdwatching Society in Morecambe and The Bangor Bird Club in North Wales - wasn't just about white-outs on the motorway, black ice and breakdowns, but also about quality birding with friends new and old.

A fine day in the snow with Dan around Cockersand was notable for no fewer than four swan species, with Whoopers and Bewick's close-up and undeterred by the flashing lights of the never-more-appreciated AA van (more here), and another fine day - this time with some welcome post-storm sunshine - on Anglesey with Robin and Stephen followed soon after (more here).


Back on the Yorkshire coast, there was little in the way of winter movements, although a few Waxwings provided an always justified distraction; they seem to getting more and more regular these days - remember when we held our breath for a Waxwing Winter every six or seven years...? A far less predictable midwinter jewel, Hornsea Mere hosted a smart male Smew, which shared an ice-free opening in the surface with Greater Scaup and many other ducks. A cracking site only half an hour away, I really must spend more time here in 2020... more here.

Sunny days in February means Goshawks displaying in the nearby North Yorkshire forests, and the old man and I had several enjoyable and successful days with them and a host of other active raptors, as described here; ditto Mediterranean Gulls, which were in various states of moult before they returned to breeding grounds across the North sea and beyond (see here); and rockpooling was back on the agenda with a few nice low tides, and South Landing always provides...

New roles I've been very happy to fulfil in 2019 included Digital Media & Logistics Co-ordinator for Champions of the Flyway, Digital Media Co-ordinator for The International Bird Observatories Conference and Website & Social Media Manager for Birdlife Israel - the first two of which in particular required a lot of attention throughout the winter, intensifying as both events approached in March. And as the month wore on with the merest vague hints of spring in the air on the Yorkshire coast, that trip to the Middle East couldn't come soon enough... 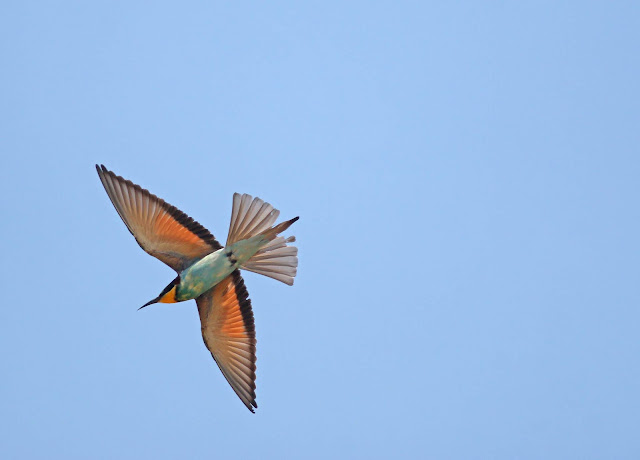 Posted by Mark James Pearson at 12:08

Early January Back On The Coast 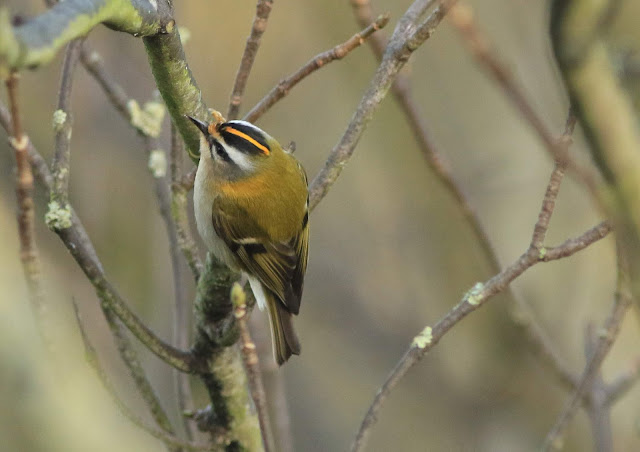 Starting the new year as I intend to continue (we'll see how long that lasts, eh), here's a quick round-up of the first ten days or so of 2020. After getting back from the States, we'd the pleasure of guests until the 3rd, later on which was the first chance I had to nip out for a quick session locally here in Filey. It was a pleasure also to catch up with the Firecrests in Church Ravine - annual here in small (but increasing) numbers, but a rare bird in winter - and then a quick pre-dusk check of East Lea produced eight Barnacle Geese with the ferals; up to two Barnacles are regular, but with the influx of geese in recent days (including this species), this is as good as it gets for wild ones locally, and so were notable. 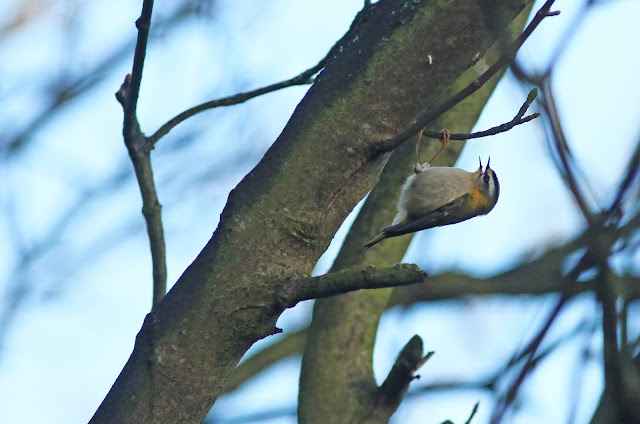 Then, finally, an opportunity to catch up with the long-staying, now-legit-wintering Yellow-browed (type?) Warbler. Found by Dan back in November while I was in Israel, it's a very interesting bird, and while it's apparently been confirmed as a Yellow-brow (the silver bullet apparently coming from sonograms), it's an education to say the least... Approaching it as unbiasedly as possible, it would immediately set the alarm bells ringing without prior knowledge re: its apparent ID - 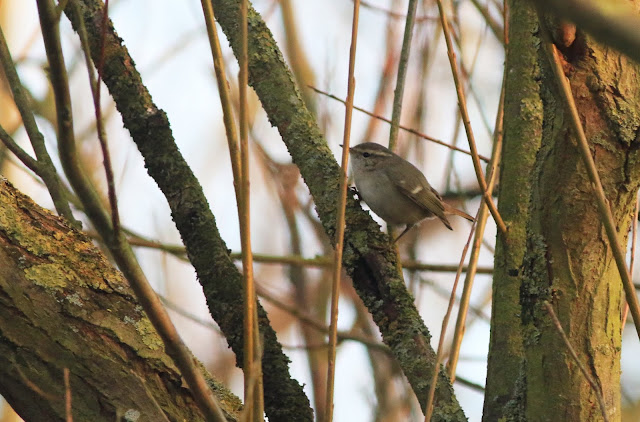 I watched the bird in relatively dull, flat light (hey, it's January in Filey) and morphologically, while there are arguably pro-inornatus features on closer / longer / alternatively-lit inspection, its overall olive-grey, washed-out tones, creamy-buff supercilium and - from certain angles - uncontrasting wing coverts strongly suggest Hume's, to my eyes at least. Good luck with one like this for thirty seconds in a dark November canopy.... 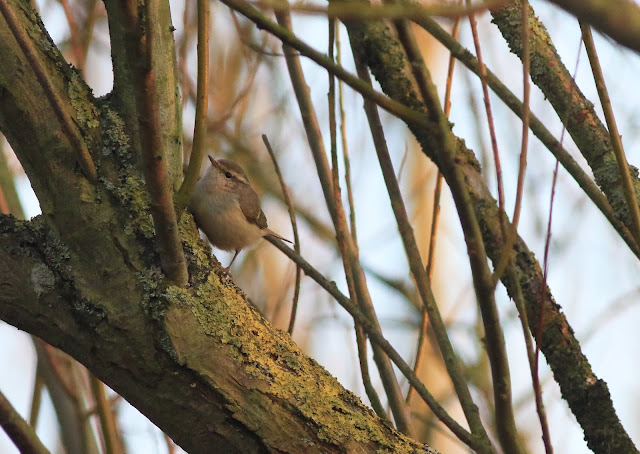 Oddly counter-intuitive, and bringing to mind a Hume's in the bay at Flamborough a few years ago which I also wanted to get to grips with for educational purposes - which, largely because of its bright, green, contrasting tones, I can't say I did.... throw in the call, which to my (clearly still untrained) ear was inseperable from Yellow-brow, and it's fair to say there's still a lot I can learn from these late autumn birds..... 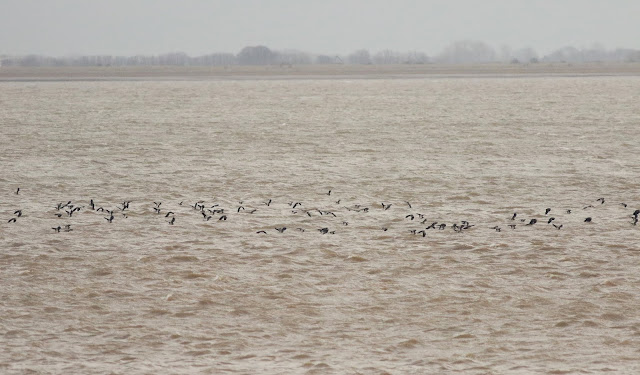 Further afield, I'd two more Humber wader surveys this week, on both North and South banks, with impressive numbers assembled along the inter-tidal zone at both sites. They may not be the most aesthetically pleasing locations I've surveyed, but the abundance of shorebirds is a treat nonetheless. Lapwings well into four figures were a particular joy - 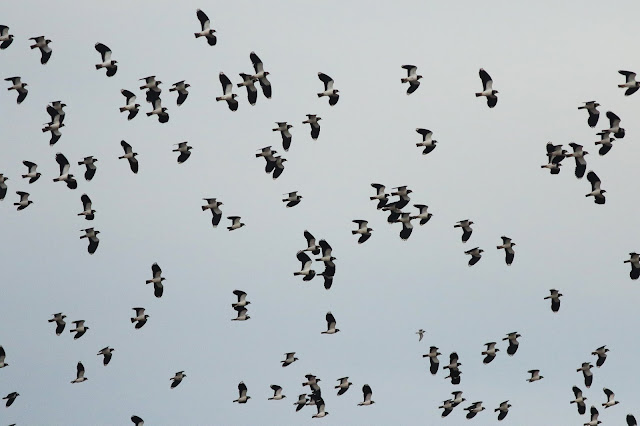 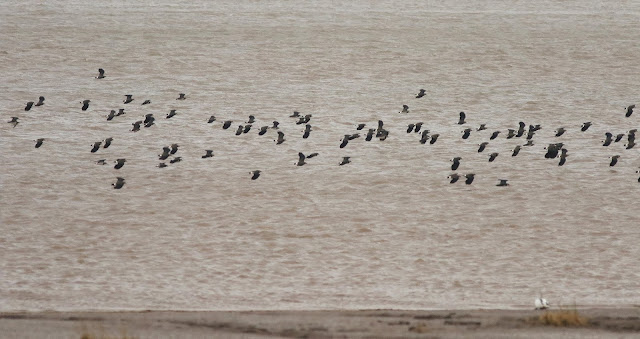 A small diversion on the way to one of them via Hornsea Mere was very productive - masses of wildfowl out on the water from Kirkholme Point, which included a redhead Smew, Greater Scaup and two Long-tailed Ducks (below); must remember to drop in on this excellent site and check through the duck flocks more often. 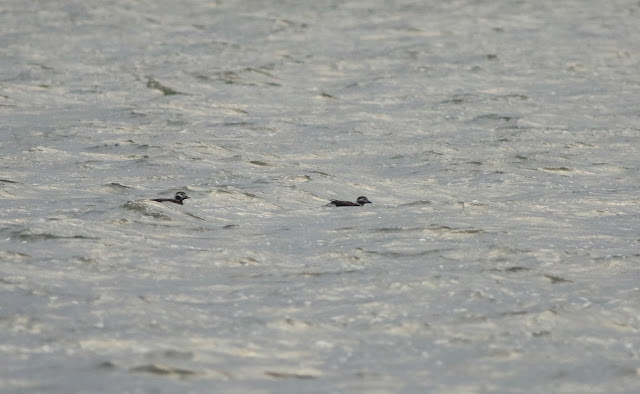 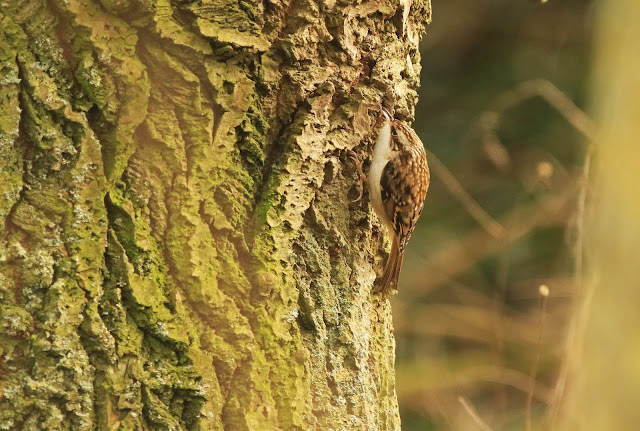 Posted by Mark James Pearson at 20:21