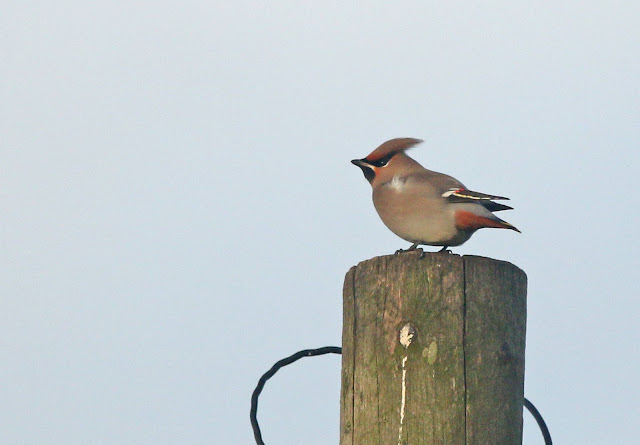 More promising conditions, and yes, more precious time to enjoy them. After a really enjoyable and productive few days spent (mainly) down the road at Flamborough, I kept the faith - not a difficult decision, with its (significantly) increased likelhood of providing decent passerines, much reduced disturbance in key hotspots, and friendly, supportive birding environment - adding no less than 13 minutes to my journey time door-to-bird in the process. 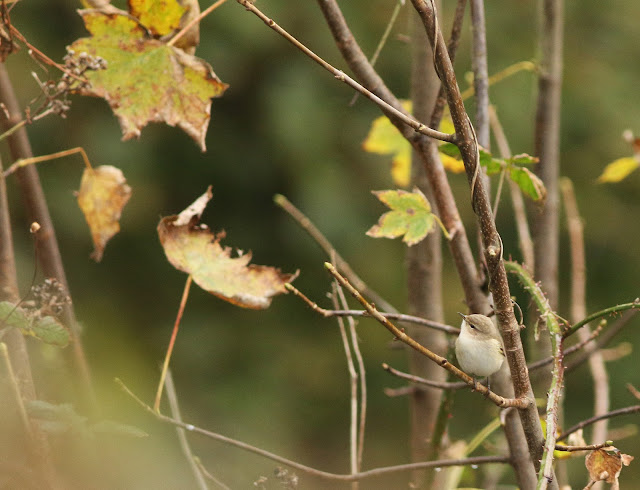 30th was a battle against strong northerly winds and regular deluges, but was still a pleasure; corners of South Landing were relatively sheltered and harboured plenty of migrants, including no fewer than three Siberian Chiffchaffs (with three collybita types for comparison), 30+ Goldcrests, two Yellow-browed Warblers (looking unfortunately bright, even in dull conditions....), five Mealy Redpolls (including a very pale bird - see next post), lots of Bramblings and Siskins and plenty of thrushes. Three hours from first light there passed quickly, espcecially with the very real hope of the next bird to hop into view being a heart-stopper. 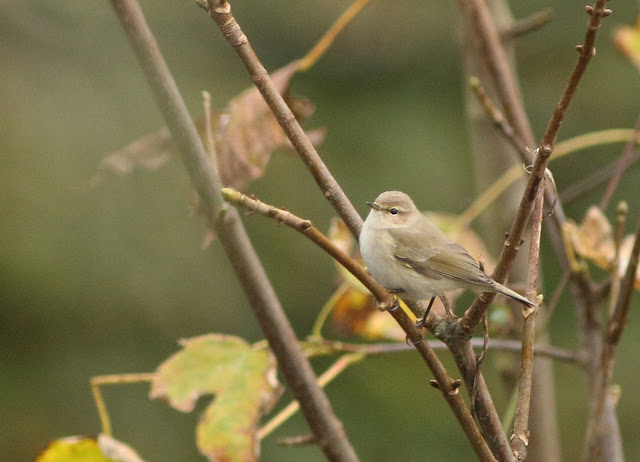 Sadly it wasn't to be, and a check of the outer head - around the Lighthouse and Selwicks Bay - was more of a free car- and waterproofs-wash than a birding session, although one bird in particular was more than worth to hanging around for. A big, chunky, pale, unfortunately silent male Bullfinch put in two brief fly-bys, instantly disappearing into scrub both times, but even on limited flight views, it looked really good for P. p. pyrrhula. With no further sign and the rain getting heavier, I put it out as a probable Northern Bullfinch, and headed back to South Landing, trying to suppress annoyance at the likely prospect of it ending up as the one that got away. 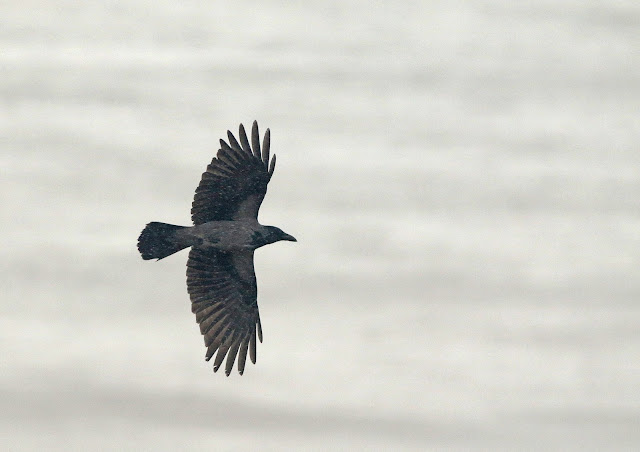 Back for a final circuit, and birds continued to entertain, with a Little Auk, a Little Gull, a Great Northern Diver and two fly-by Hooded Crows from the clifftop, and there was plenty of passerines still to grill in the ravine (as well as Water Rail and Woodcock). A brief scan of the sea was soon curtailed, however, with a message from Ana, in the office at the top of the slope, about a Great Grey Shrike sat next to the feeders, a metre from the window... 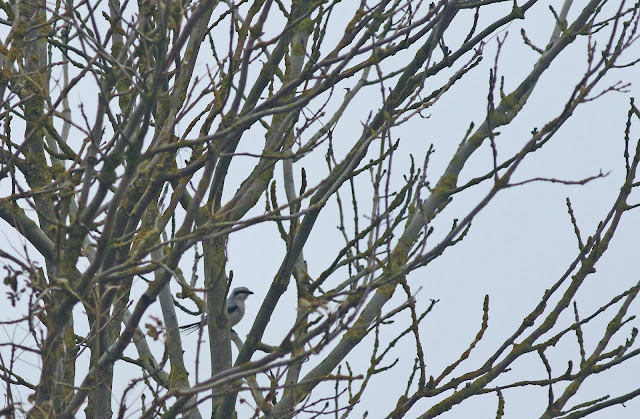 Flighty but thankfully still around, the shrike landed in the trees by the car park just as Ana was describing her lucky glance out of the window, which we followed with celebratory tea and cake in the office; a challenging but productive and enjoyable day. Come the 31st, and conditions couldn't be more contrasting - deep frost on the windscreen, sunshine, brisk south westerlies - and it was a half day to roll the die and try and uncover a gem deposited in the maelstrom of yesteday's swirling downpours from the north-east. 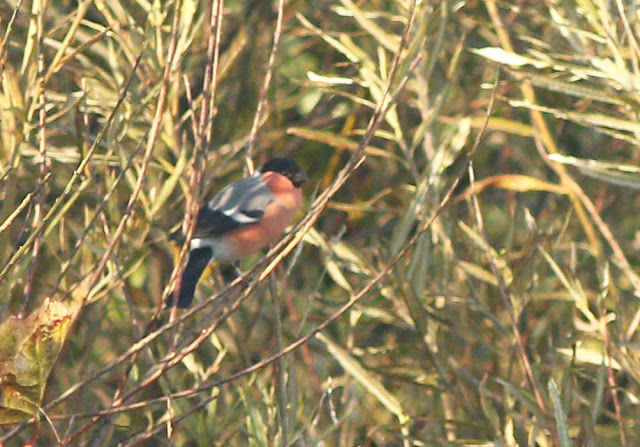 One of the first birds I saw upon arriving on the outer head, flying west from the bay (scene of yesterday's frustration) with a couple of Chaffinches, was a beast of a male Bullfinch.... it had to be the same bird, and off it seemingly buggered. But before I'd had time to swear with any conviction, Phil appeared, with the news that it'd (diagnostically) trumpeted loud and clear as it did so - instantly turning frustration into vindication. Better still, the bird returned to its favoured spot, trumpeting sweetly on several further occasions, and even allowing a few hastily-snatched record shots (which won't win any awards, but give a good impression of the bird's distinctive appearance). 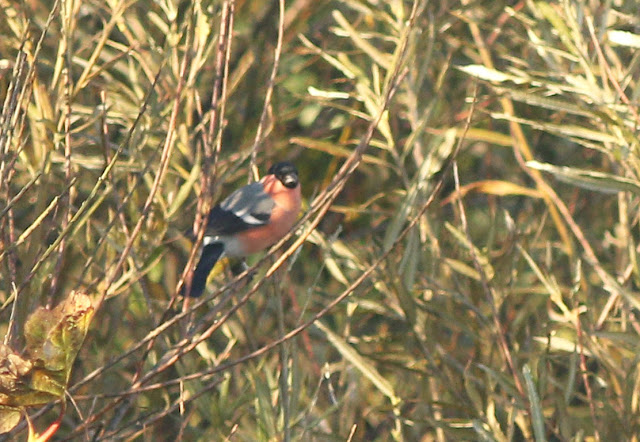 Looking at the annual trends, Northern Bullfinch is actually a genuinely rare bird, with on average only a handful of reports (not all confirmed) each year; most of those, as might be expected, come from the Northern Isles or (to a significantly lesser extent) the east coast, with late October and early November a peak period. So, while not quite a Rubythroat, somewhat more of a reward than one might initially give credit for. 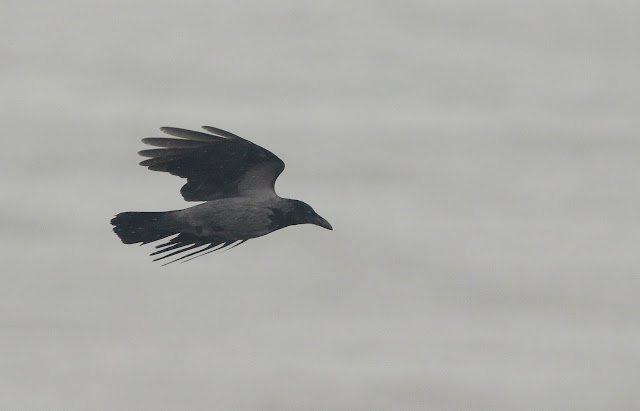 With Waxwings arriving at the lighthouse and plenty of migration overhead (especially Skylarks and Fieldfares), the morning ebbed away pleasantly and responsibilities beckoned, but not after reflecting on several days characterised by a wonderful variety of migrants from the North and East. On terra firma, plenty of specialist treats including the aforementioned Bullfinch, Great Grey Shrike, Hawfinch, multiple Siberian Chiffchaffs and Hooded Crows, Coues's Arctic Redpolls and Waxwings, and commoner (but no less valued) incomers such as big numbers of Bramblings, Siskins, thrushes, and multiple Mealy Redpolls; at sea, numerous Little Auks and Pom Skuas and were augmented by rewards such as Black Guillemot, multiple Scaup, Long-tailed Ducks, Black-throated Divers, Red-necked Grebes and lots of other action over the waves. All within twenty minutes of the house... not such a bad place to be after all. 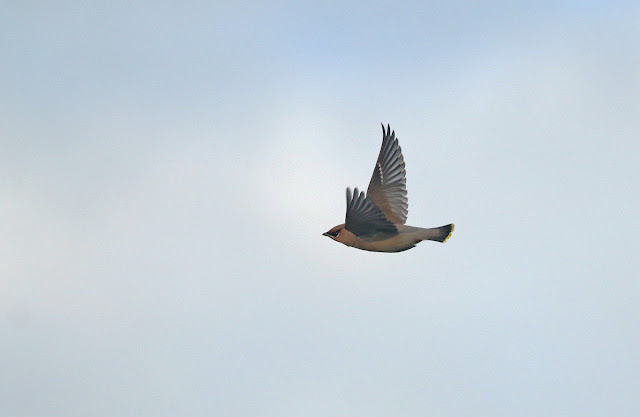 Posted by Mark James Pearson at 22:16