So despite everything, you may have noticed it's being going very well re: my local lockdown birding here in Filey, with visible migration being especially kind so far this spring. In the last couple of weeks, I've had Woodlark, Hooded Crow, Marsh Harriers, Red Kites, White Wagtails and lots of other quality flyovers, culminating in the fine prize of a Crane a couple of days ago - hence the 'Vismig Gold' part of my last post's title ....


48 hours later and I'm a willing victim of my own hyperbole, with this morning providing quality in the shape of Yellow Wagtails (first of the year), a single Crossbill among a good push of finches, and the first mini-surge of hirundines - House Martins, Sand Martins and Barn Swallows all suddenly into double figures, providing a perfect supporting cast to nothing less than a Red-rumped Swallow...


Despite putting in more hours vismigging (and general local birding) than I care to remember, it's a species that - although very much on the radar at certain times of year especially - has managed to body-swerve me on several occasions; I can think of at least two occasions when they've almost certainly flown right past me, fate pointing me in the wrong direction. But they're a tricky bird to get locally, with only a handful of modern records and, of course, a habit of bulleting by, never to be seen again.


Not this time. After word came through of one heading south via the Scarborough Birders Whatsapp, I altered position slightly to broaden my panorama to the north, and waited.... 17 minutes later and a loose group of hirundines approached, well spread and at full speed: manic checks of each, with barely seconds to do so, revealed a Sand Martin, a Sand Martin, a Swallow, a House Martin, a Sand Martin, a Sand Martin and BOOM! Just as it threatened to sneak by unappreciated, I clocked it against the low-tide sands of the beach as it hurtled south.

Immediately calling Keith, in position as ever just over 2km to the south at Hunmanby Gap, I garbled out a message, hung up and hoped, and for once it came good - barely a minute later and not only did it appear, it even made it into his DSLR viewfinder for long enough for an excellent action shot....


Just to make a good day even better, as I sat at the dining table soon after returning, the gulls kicked off outside - and after grabbing the camera and looking out of the (ground floor, dirty, double-glazed) window), by sheer luck, I had two seconds of full-fat house tick mega Marsh Harrier disappearing behind the chimney stacks... my second large raptor for the Lockdown list, after the far more expected Common Buzzard, and a long hoped-for addition to the window list. 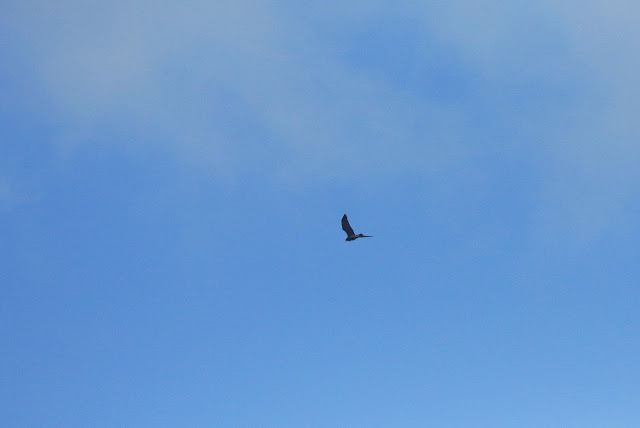 So, it's been a really productive spring so far under the circumstances. Let's hope those circumstances remain practical enough for the enjoyment of local daily wanderings and the birds I'm fortunate to enjoy on them; either way, I'm making the most of it.

Posted by Mark James Pearson at 21:58