A little late, perhaps, but here's a summary of my nocturnal migration recording adventures for the month of April 2020 - my first month, and my first primitive attempts, at this exciting and addictive new string to the birding bow.


I've had lots of queries re: how it's done and with what gear, etc., and - with the caveat that in respect of nocmigging I'm very much a beginner - here's a quick recap. Regarding gear, I use an Olympus LS-11 digital sound recorder, which I bought some years ago for recording calls and songs in the field; it's discontinued I believe, and there are various newer and better similar hand-held devices, but it does the job just fine for now at least.


Others use an array of different set-ups, depending on budget and circumstances, with the standard method involving an external mic (often with a parabolic reflector, or DIY equivalent) set up in a garden. I have none of these, and still get what are still (to me at least) surprisingly productive results....

The playback (or, more accurately, the look-and-playback) process is pretty straightforward, and involves uploading the recording from a memory card onto the laptop, which is then opened via a (free) software program called Audacity. I could bang on about it more here but it's much better explained, all in one place, on the Nocmig website here.


As mentioned in a recent post on the subject, the lack of a garden - and the fact we live in a 100% urban setting in middle of Filey (surrounded by bricks, mortar and concrete in all directions) with a very limited sliver of sky to 'capture' any calls - effectively killed off any enthusiasm for previous attempts; it just didn't seem worth it, especially with lots of street noise and - and this is hard to do justice to - the cacophony of satanic howls and screams that comes from living in the middle of a very loud Herring Gull colony.....


But after a beautiful chance encounter with a low flying flock of beeping Common Scoters while brushing my teeth late night on 31st March (see here) and the potential they illustrated (especially in lockdown circumstances), I decided it was time to give it a whirl; after all, what was there to lose? I'm happy to say that, thus far, it's just got more exciting and addictive as the weeks have worn on; extraordinarily, I'm yet to have a blank night - despite all the limitations, the gulls effectively wiping out 60-70% of airtime most nights, and the vaguaries of conditions....

So, what have I picked up? For April alone (not including these first nine nights of May, which have been really productive - more to follow), a relative treasure trove of avian wonders winging their way over the chimneys, restless gulls and sleeping humans of midtown Filey. By entering my counts on Trektellen - a great data-storing website that I've been using for more than a decade - not only do the counts contribute to the bigger picture and a wider understanding, but the site does the stats for you, and spits out all manner of graphs and charts to placate even the most needy of nerds. 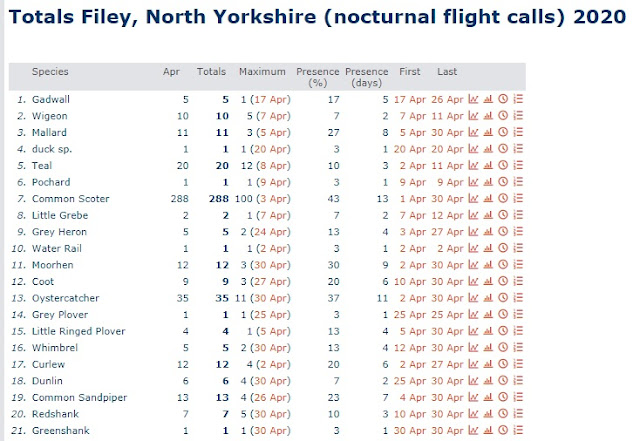 Here's the totals in simple form, and looking at them in species order, there's lots of surprises. Six duck species (and likely one or two more - especially Tufted Duck - if wingbeats could be seperated), including regular Gadwall, a Common Pochard and best of all, of course, shedloads of Common Scoters... rails (Coot, Moorhen and Water Rail), while the most expected of nocmig species, are still great to register, if only to imagine their ungainly forms and dangling legs up just above the rooftops... 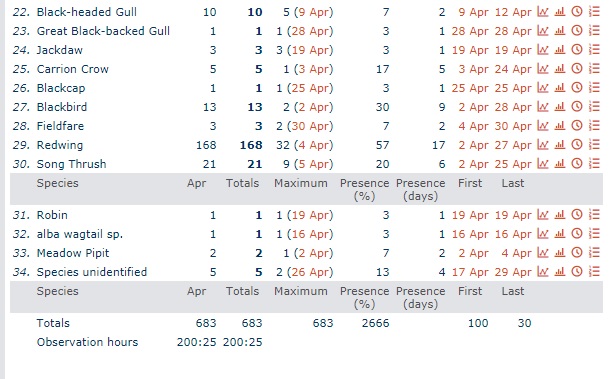 Nine shorebird (wader) species is a great return, with the stand-outs so far probably being Grey Plover and Greenshank, but the regularity of Whimbrel, Little Ringed Plover and (especially) Common Sandpiper, as well as Curlew, Dunlin and Redshank, is fascinating. Gulls (shudder) have at least included a Great Black-back, which flew over and instantly silenced the entire Herring Gull colony (hmm, a future ploy...?), and night-migrating Black-headeds, while both Jackdaw and Carrion Crow have also registered as flyovers in the dead of night.


Without a doubt the most surprising and fascinating aspect so far, however, has been the variety of passerines. Beyond thrushes, I didn't expect any, to be honest; and the lack of any available habitat (and the red flag of gulls) seemed like extra deterrents to any brave songbird, which would surely body-swerve the concrete jungle and wailing sirens in favour of a safer route nearby. But, I'm very happy to say, I was wrong....


I'm keeping my discipline here and avoiding writing about the brilliant surprises of May (although you can access them on Trektellen here of course), but April started the ball rolling and it hasn't stopped yet. Thrushes were indeed the most expected, and Redwing was a regular tsssiipping pleasure, clocking in on the majority of nights. Blackbird and Fieldfare also figured, as did plenty of Song Thrushes exiting the UK for the continent (but no Ring Ouzel as yet, night or day this spring - looks like autumn then!).

A migrating Robin, two nocturnal Meadow Pipits and an Alba Wagtail were all unexpected bonuses, but perhaps the most surprising few seconds of all to register on the spectrogram contained the night-flight migration song of a Blackcap. At the time, this was the first warbler I'd recorded skimming the chimney pots and after posting the spectrovid on Twitter, a barrage of replies along the lines of 'I just had that too' and 'of course, Blackcap!' etc. was a happy testament to both the fledgling nocmig community and social media.


Just a Blackcap, I know; but a Blackcap that fluted out a little migration song as it navigated just metres over my sleeping head in the middle of an urban environment, in the middle of the night, which would otherwise have gone completely unnoticed (and unappreciated). And May was to up the stakes further.....