What to say? Not much of any real consequence; but feeling compelled to try, so here goes anyway. If you're lucky, occasionally you come across one of those rare and special people who have such a positive influence and reach that they make you feel part of a wider shared experience, way beyond your own parameters. Our wider shared experience - our community - has just lost its very finest, and many of us have just lost a true friend. In the relatively short time I knew him, Martin was a constant education and inspiration, unwaveringly encouraging and supportive, cheerleading for me til the last, and always a joy to be with. How many people are saying exactly the same thing presently? A lot of us. And that's probably all you really need to know.


As an absurdly talented birder and intuitive pioneer of identification, he needs no introduction, and there'll doubtless be plenty of suitably celebratory appraisals of that in the next few days and weeks anyhow. The best I can do is to share a flavour of my personal experiences with him, which for those who were lucky enough to have him as a friend will sound all too familiar, and for those who weren't, will hopefully provide an impression of the kind of person we're talking about.

Martin and Sharon moved to Flamborough around the same time Amity and I moved up here to Filey three or four years ago, and in similar circumstances - looking for a radical change in location and lifestyle, and (in the case of Martin and I at least) a mouth-watering east coast local patch to immerse ourselves in. One of the first and strongest mutual chords we struck was our shared desire to open up the magic of migration on our respective patches to anybody who might be interested, or indeed anybody who'd listen. We talked about combating the judgemental snob culture which repelled (and often still repels) many curious and less experienced birders at such places, and how best to do so. It goes without saying, he knew better than I.


A beautifully appropriate case of Martin leading by example can be seen at his adopted home; a place once so hamstrung by elitism, subterfuge and one-up-man-ship, now indelibly brightened by his brand of all-inclusive, mutually-supportive birding culture. 'He didn't suffer fools gladly': I always think of Martin when I hear that phrase - because he was the polar opposite. He was all about suffering fools gladly; at least, people traditionally and wrongly dismissed as fools. Got a stupid question? Made an ID cock-up? No problem, bring it on. And don't let it get you down - ignore the haters, enjoy your birds and enjoy learning. So simple, and yet so easy to forget.

Some of you may have seen the guest editorial of his in the December edition of Birdwatch magazine; if you haven't, here it is (click on the image to enlarge). It's Martin all over - irreverent, inspiring, bright-eyed and bushy-tailed, and by all accounts it's a perfectly fitting last blast from someone who embodied community, support and enthusiasm - the kind of child-like enthusiasm that so many who reach the top of their game (such as he) so often lose sight of. If you're looking for the best way to think of him, look no further - read it and smile, and keep his ethos alive. 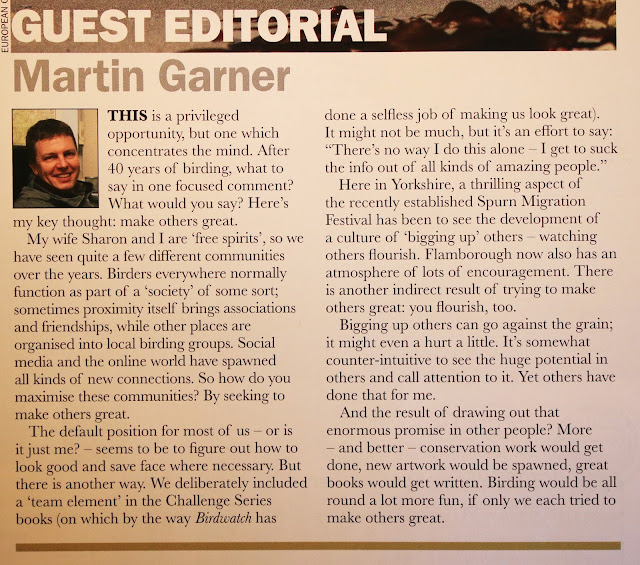 Bringing people together was his thing, and you could see the kick he got out of connecting people he instinctively knew would get on, benefit from each other, themselves making the ripples reach even further. I've been lucky to make connections with many good people through Martin; how many of us can say that? How long have you got? As an example, I think of last summer - "You have to meet Yoav!" - and a lovely day Amity and I spent in the garden with Yoav, Adva, the kids, Martin and Sharon. Friendships were forged, lots of fun was had, and we even had a Bee-eater hawking insects with hirundines from the bottom of the garden; he wasn't at all well, and yet was bouncing off the proverbial walls like a big kid. (Yoav's wonderful tribute to Martin can be read here).

I also had the pleasure of working with him on various projects, including his Birding Frontiers website (often as book reviewer - "Oi, wordsmith, I've got another one for ya!") and also on the Winter edition of the Challenge series. As someone who's used to having their work often clumsily chopped up by editors, writing for Martin was just a total pleasure - his editorial feedback would usually consist of a list of superlatives, followed by a complete tangent regarding an ID issue that'd just occurred to him. Brilliant.

Martin's public legacy, far-reaching and of wonderfully enviable depth as it is, hardly needs mapping out, and there are many much better placed to assess it than I. But for me, his legacy is something I'll carry around with me, and something that will continue to positively influence my birding and my attitude indefinitely. I had the good fortune of sharing many occasions with him over the last few years that have become great memories. Pretty much any of them would illustrate his joie de vivre, but here's one off the top of my head. 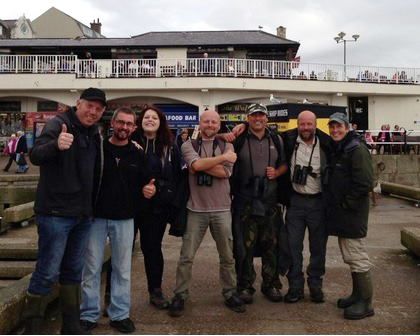 It's only a little more than a year since a bunch of us chugged out into Bridlington Bay and off the tip of Flamborough Head with a few buckets of chum. Martin had been ill for some months, but typically, you wouldn't know it; why let cancer get in the way of a good time with friends? We'd a decent cast of birds, including Long-tailed and Arctic Skuas sparring together, but there was one moment in particular that was pure Martin. Having already flagged the possibility of a juvenile Caspian Gull in amongst the masses of commoner congeners, he somehow convinced us it was a good idea to beckon one in with a vocal, co-ordinated Caspian wave (see below); at once ridiculous and hilarious - and of course, it worked. Guess who then picked out a pristine juvenile approaching, without lifting his bins, and sound-tracked by the trademark enthusiastically-communicated ID tips thrown in for good measure.... what a legend. 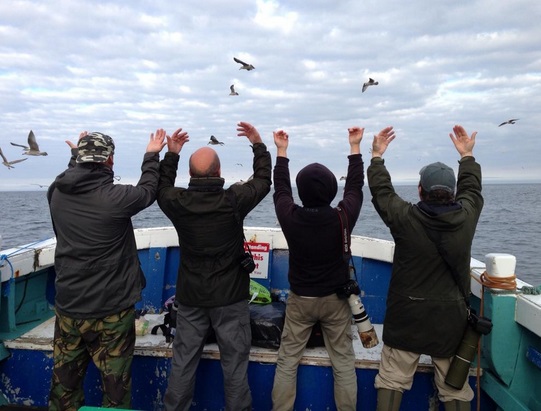 I've been looking for a (long-overdue) Caspian here in Filey, so far in vain, but with the kind of persistence and patience Martin counselled, it's bound to happen sooner or later. When it does, it'll be a bittersweet find; I know I'll instinctively reach for the phone, eager to share the minutiae with the master, knowing his reaction would be nothing but supportive and celebratory. On the other hand, without his pioneering and discoveries, I probably wouldn't even have found or claimed it in the first place (and we'd probably all still be calling them Herring Gulls anyway). And when I clinch the ID, there's only one word that'll do the job.

Posted by Mark James Pearson at 12:58