A quick heads-up regarding a recent post over on the (always excellent and recently rejuvenated) Birding Frontiers - Yoav shines a light on the field identification of this race (/species/?) and of the Filey bird in particular. Martin would've loved it. 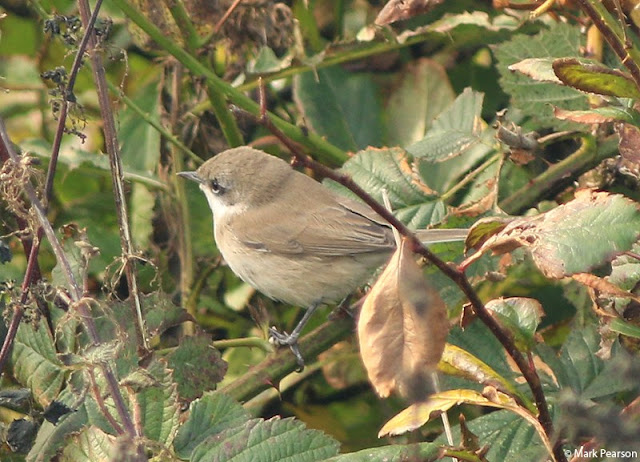 Posted by Mark James Pearson at 17:50 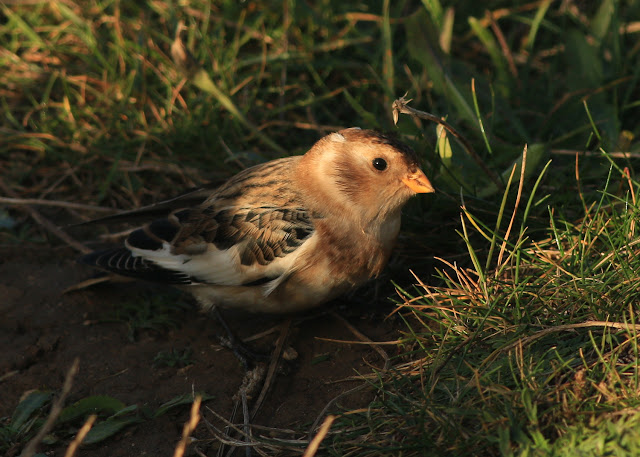 What a beauty.... despite it being windy as hell on Carr Naze this afternoon, this ultra-accommodating Snow Bunting allowed a few non-blurry shots as it fed on the paths along the northern side. Hard to beat. 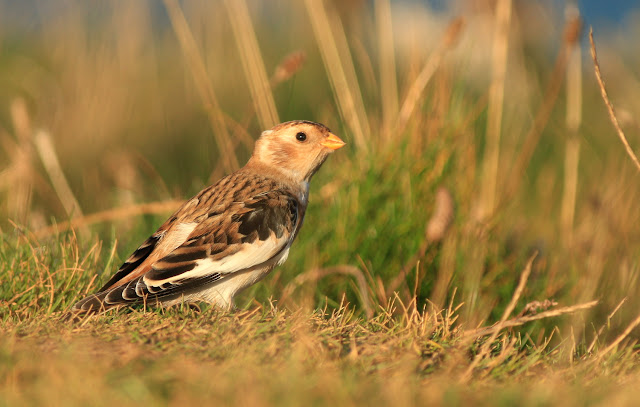 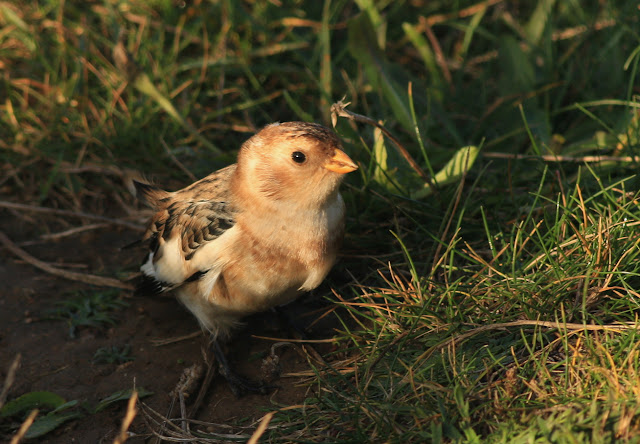 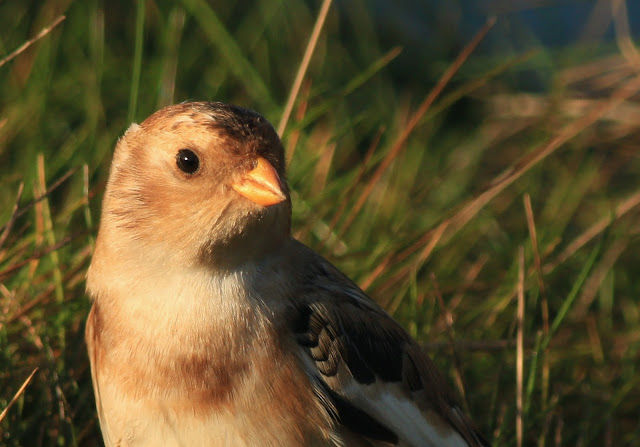 Posted by Mark James Pearson at 19:55 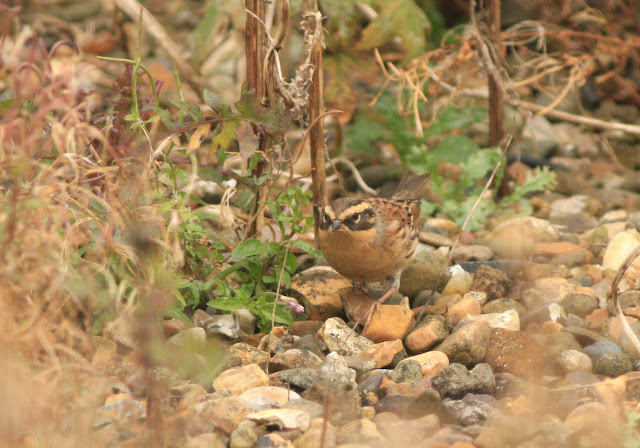 The first unpromising day on patch in a good while (crappy strong winds from the wrong direction) and the offer of a dirty twitch to that extension of Shetland known locally as Spurn was the proverbial no-brainer this morning, and a day in the very entertaining company of Filey comrades Pete, Dan and Chris ensued. Our main target was of the course the 'transvestite Dunnock' (Chris's description - nice), followed pretty closely by the Isabelline Wheatear, and happily, both remained in situ for us as we rocked up absurdly late to the party. 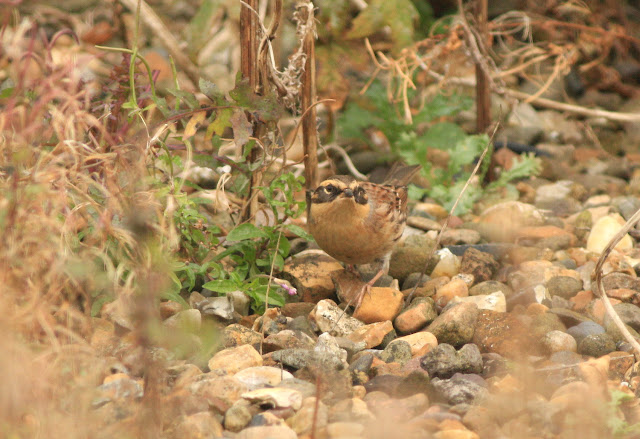 Of the Accentor: having been neutralised by a trillion images of these pinko invaders over recent days and having relentlessly patrolled my corner of the coast on red alert for the merest whiff of a custard supercilium, I can happily report that connecting tamely with the real thing was anything but an anti-climax. In truth, it was great; a beautiful, characterful and utterly class Sibe grubbing around exotically among the gravel and weeds of the Quatermass-esque Easington Gas Terminal was as absolutely good as it sounds. 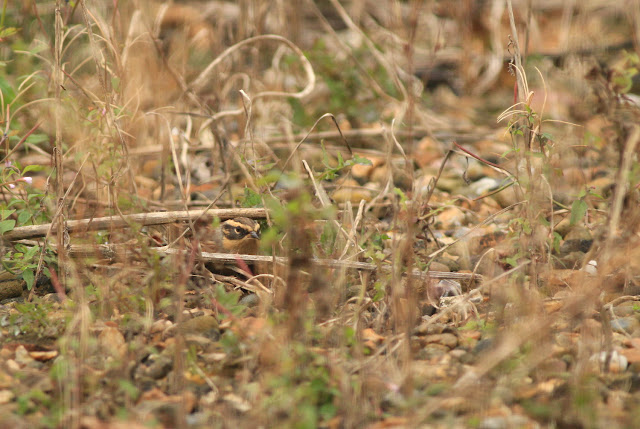 Of the Wheatear? Well, despite it's temporarily dishevelled and bedraggled appearance, it was just the education I'd hoped it would be; indeed from a learning perspective, it was a class act. For sheer aesthetic sharp-intake-of-breath gorgeousness, however - go twitch a Sibe Accentor, you won't regret it. 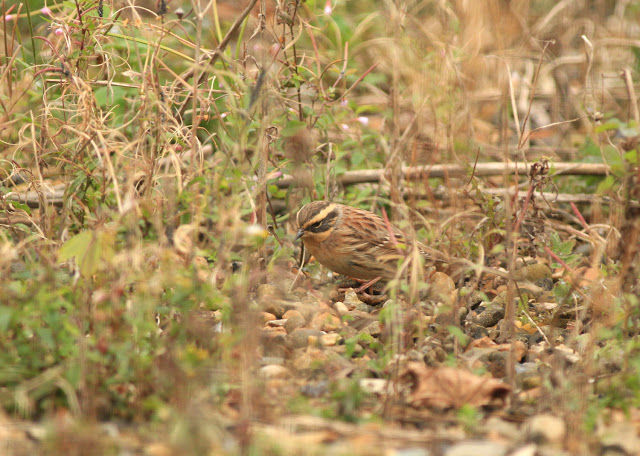 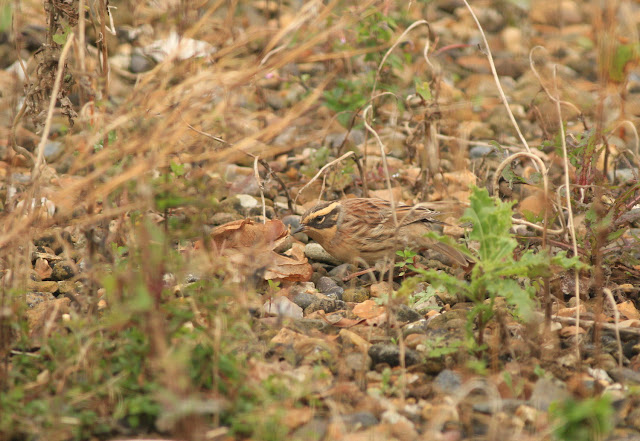 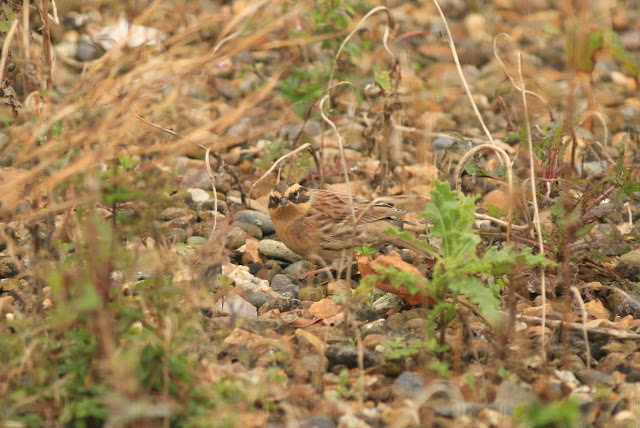 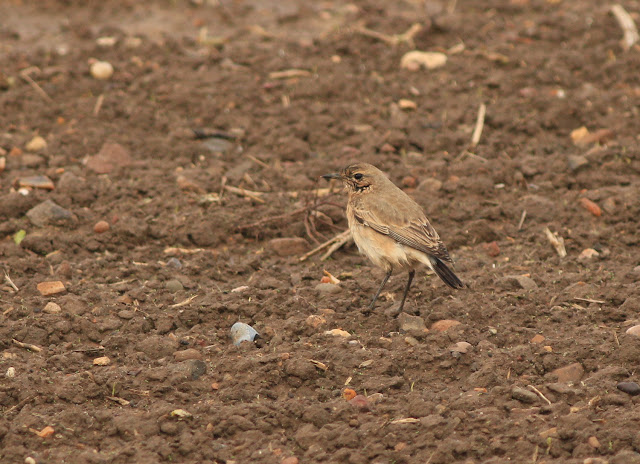 Posted by Mark James Pearson at 22:55 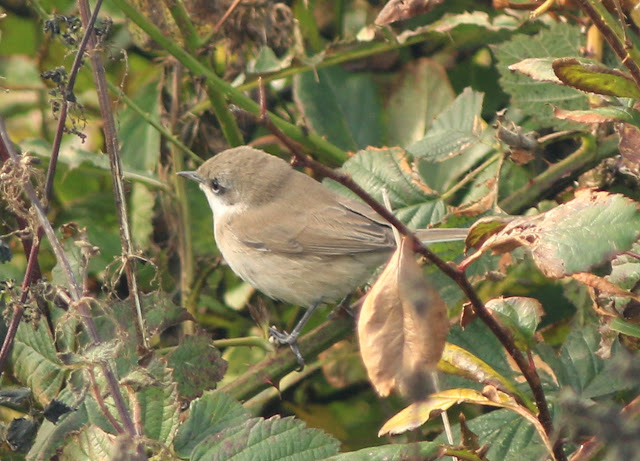 So here's how I spent much of my day... I hit the circuit late this morning, in fact 'enjoying' a lie-in til about 8 am (thus proving to both my wife and myself I have yet to turn 100% into a glassy-eyed psychopath - still hovering healthily around the 95% mark), and soon found myself on the clifftop, going through the larks and thrushes feeding in the open fields. Walking back along the field edge towards the Tip, I flushed a sandy-coloured warbler with strikingly white outer-tail feathers (alarm bell #1), which bolted into the nearest hawthorn. 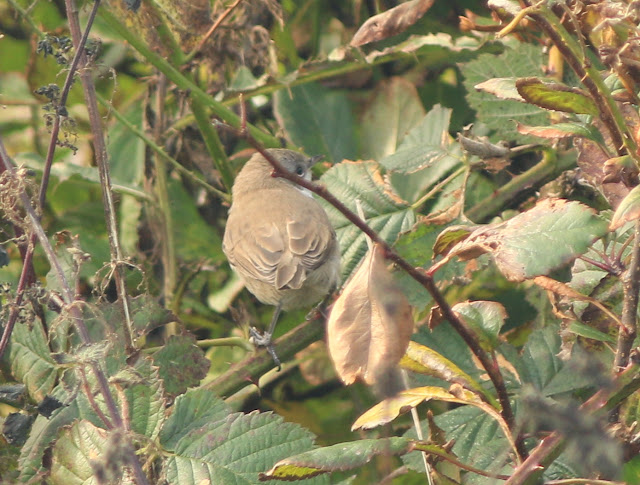 Over the course of the next hour or so, I had regular, brief but good views of the bird at close range as it skulked in the hedge, occasionally responding to a little pishing and tacking, while putting a call out to the ringing contingent and awaiting their arrival. Late date, long-term easterlies and a barrage of far-flung Asian rarities swamping the east coast aside, this bird was clearly from a long way away. Thanks to the recent developments and reshuffles of the Lesser Whitethroat group, the features of potential eastern birds - including halimodendri - have increasingly been on the radar. But while I've had several of what I consider to be very strong candidate Siberian blythis before (including a striking, calling bird a couple of weeks ago), this bird was the proverbial sore thumb. 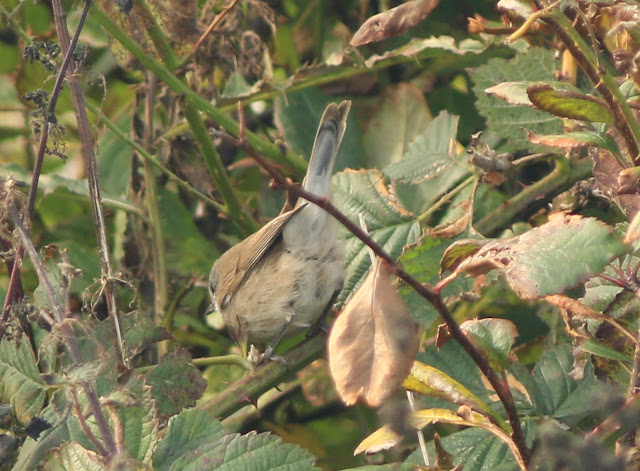 I'm thankfully in the habit of writing up field notes and sketches again these days, and so an uber-concise summary is as good as it gets on here for now, but a combination of the following would seem to raise a pretty convincing flag for Central Asian Lesser Whitethroat, S.c.halimodendri: 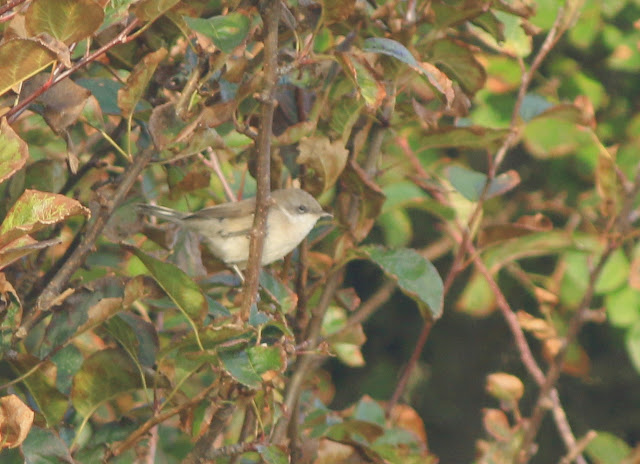 Long story short, three hours later and thanks to the strong wind, dogwalkers, other birders, bouncing twice and escaping once, our sandy little quarry had us beaten. Maybe tomorrow. 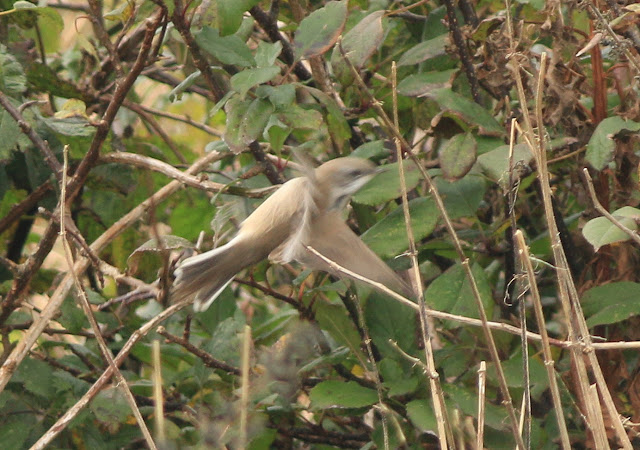 Posted by Mark James Pearson at 20:15 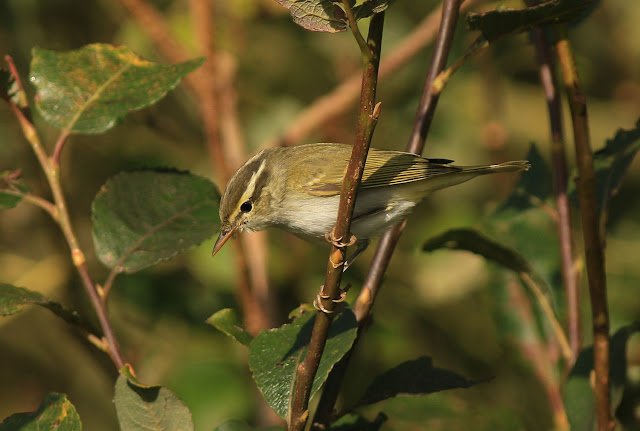 Another quick one .... after a forgettable few days of toil for scant returns (despite the oh-so-promising conditions) here at Filey, it was good to crack and pay homage to this, well, absolute beauty over the bay at Bempton. Well done Dave - it couldn't happen to a better warden and nicer chap. 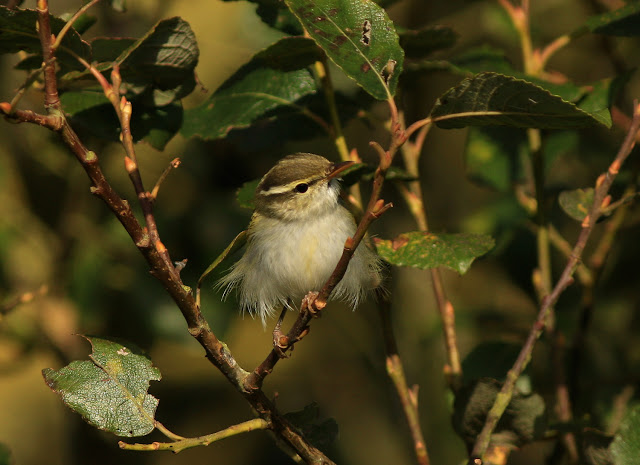 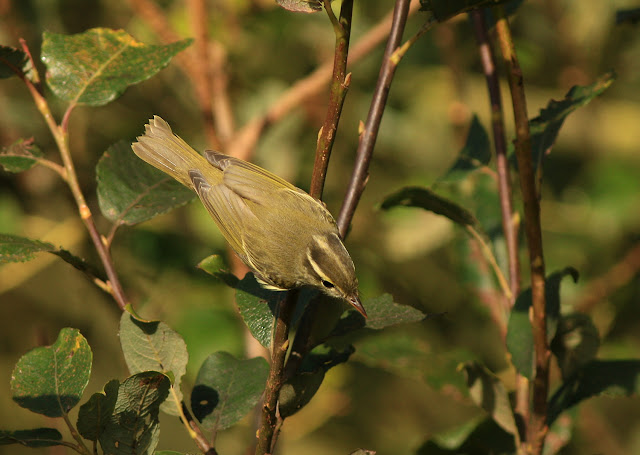 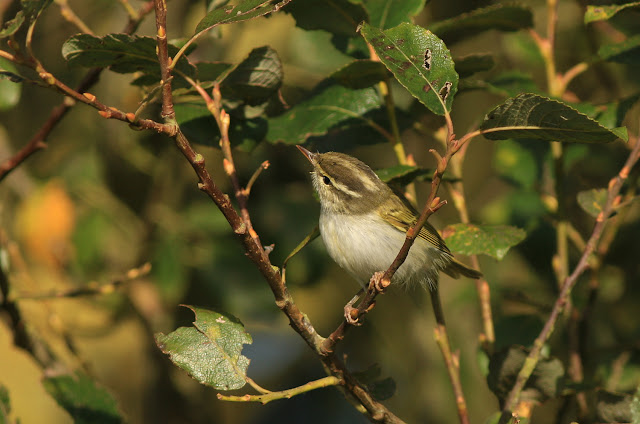 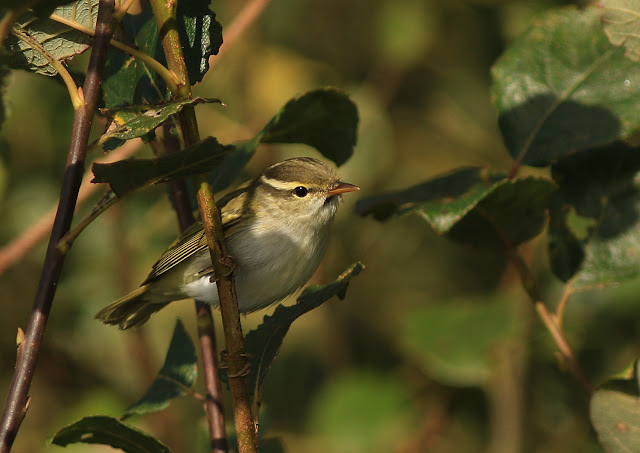 Posted by Mark James Pearson at 20:01

Posted by Mark James Pearson at 19:16