A trip out to Rainham ostensibly for unrelated work reasons, but also an excuse for a few hours birding in this most picturesque of global landscapes. Nothing particularly stunning, but a few early spring migrants to enjoy, and large numbers of wildfowl. The highlights, excluding the joy of the cold wind and rain, were: six Little Ringed Plovers, a single Ruff, a Brambling on the feeders, and about ten Little Egrets.

With various white-winged gulls reported of late, we took a deep breath, held it for a long as possible and braved the tip for an endless, fruitless fine-toothed comb search through the clouds of large larids with the stench of modern society and squalls of hard-hitting rain for company. It's only occasionally I wonder why I love birding so much, and this was one of those occasions.

However, a visit to the stone barges a mile or so west on the Thames foreshore was, while almost as festering, an absolute treat, on account of no less than 12 Water Pipits at close range, lined up and / or flitting between the barges and the tideline. 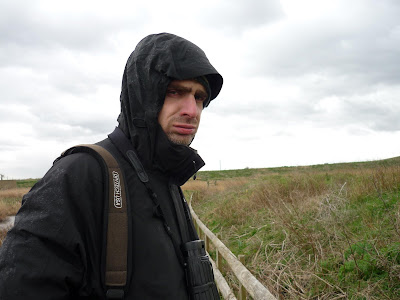 Mr. Cook captures the mood and the rain at the Target Pools on the RSPB reserve 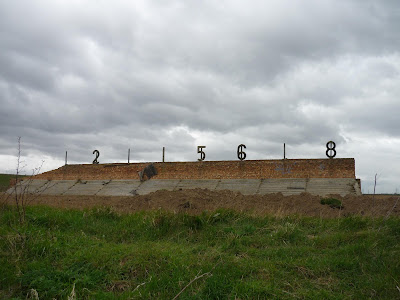 The old target practice site, a reminder of when Rainham was MoD hell. Picture of the day, on account of being the only picture of the day not showing a digruntled Hackney birder

Posted by Mark James Pearson at 21:38

A not-strictly birding afternoon visit in warm sunshine was a pleasurable way to hold a work meeting - the Cormorant and Heron colonies are in full swing on the islands, a singing Chiffchaff was by the Ferry Boat Inn, and a pair of Little Egrets were nest-building in the Heronry - still Greater London's only breeding site for this now common county species....

Posted by Mark James Pearson at 15:24

The first warm, sunny, truly spring-like day of the year and a social obligation to see friends in Walthamstow, hence a walk through Springfield Park, over the Lea Navigation, and along Coppermill Lane. At the point where the Filter Beds end and the residential area begins - and behind razor-wire fences along the canal - a Willow Warbler burst into song, a couple of metres in from the fence. One of those out-of-the-blue chance finds, and wholly unexpected this early in the month. A few more phrases and some nice views later, we moved on.....

The bird was still present on the way back (at 1725), and is (as far as I know) the first to reach the London area this year. Despite odd birds having been recorded nationwide in the last dew days, and several others today as far north as Yorkshire, it still seems ridiculously early.

It may sound a little ungrateful, but (bizarrely) such a fluke find wasn't the highlight of the day. A few minutes walk west along the track which seperates the marshes from the reservoirs, I heard a quiet crunching sound from the dyke just beside us. Looking down, and less than a metre and a half away, a Water Vole sat, chewing contentedly on plant matter, looking straight at us. It stayed there for a good ten minutes, despite kids on BMX's passing and feral chavs barking like rottweilers within the same distance, completely unconcerned. 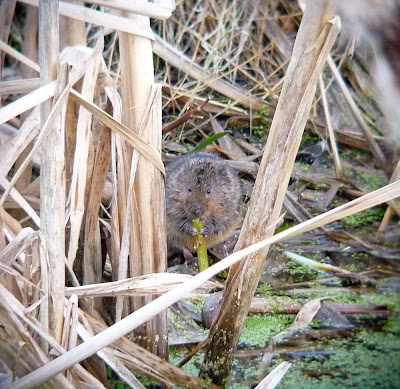 A few steps further along, and a second vole appeared just as close, swam past us, and joined its mate for supper. Unforgettable, and as far as I can remember, the first decent views I've had of this Disney-esque little mammal.

Posted by Mark James Pearson at 19:03 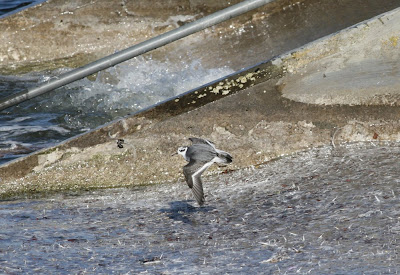 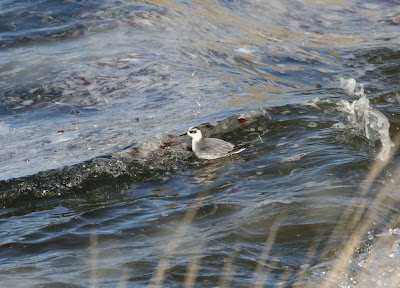 A Sunday morning jolly a few miles north of Mother Hackney, with Tony, Phil and Laurence, courtesy of the latter's increasingly spluttering turquoise rust-bucket; taking in such north London wonders as Tottenham Hale shopping centre and Edmonton Ikea, KGV Reservoir was, comparitively speaking, a vision of loveliness (which is really saying something).

A stiff, cold north-westerly made the expansive surface of the reservoir more akin to Filey Bay during a north-easterly, but with clear blue skies and the sun behind us, viewing conditions were excellent. Navigating the flocks of sheep along the eastern bank, we soon (re)found the Grey Phalarope - truth be told, our reason for venturing outside the borough, having been located yesterday - which couldn't have been any more accomodating. 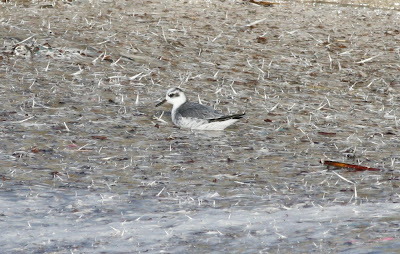 Feeding actively a metre or two from the shore of the south basin, the bird seemed happy enough bobbing around in the collected flotsam, occasionally fluttering short distances away from the bank and surface-padding like a tiny Jacana on several occasions; a fine little bird to see in such grotty, bleak urban environs. 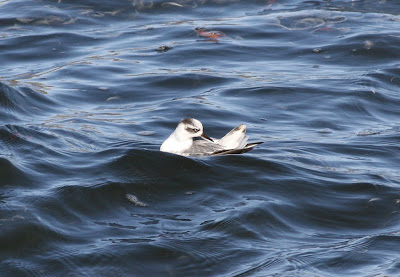 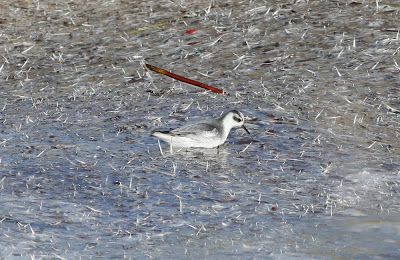 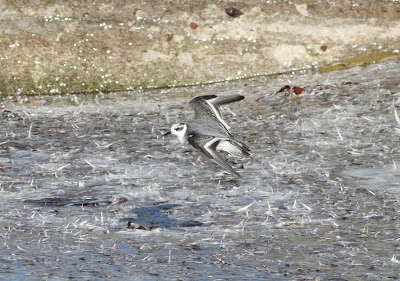 Posted by Mark James Pearson at 12:10 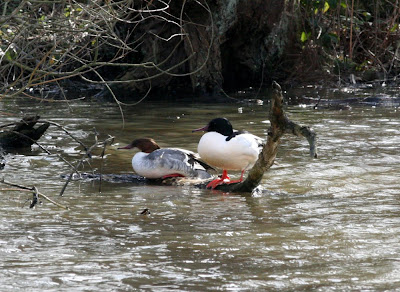 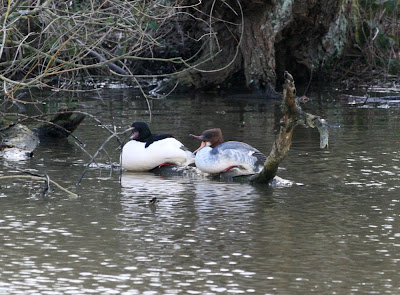 Another late winter/early spring day-tripper with Hackney's finest, comrades Laurence and Paul; this time in pursuit of a species that's notoriously hard to pin down, and one which has eluded us all in recent years (at least in getting decent views). Navigating north through the snarl-ups and road rage of the A10, we eventually made it to Trent CP - an expansive, tranquil site adjoining the grounds of Middx University, consisting mainly of mixed woodland, with various hedgerows, arable fields, ornamental gardens and two small lakes.

A cold, mainly sunny day made for good conditions, and in the course of our four or five hours at the site, lots of classic woodland species put on a good show, with plenty of courtship, singing and nest-building activity going on around us. Treecreepers, Nuthatches, Goldcrests, Great Spots, Bullfinches and all the commoner species were enjoyed, and on the lakes, a pair of Goosander were unruffled by our presence, spending some of the time dozing on a part-submerged log no more than 15 metres away. Mandarins, oddly impressive despite their status, were also omnipresent. 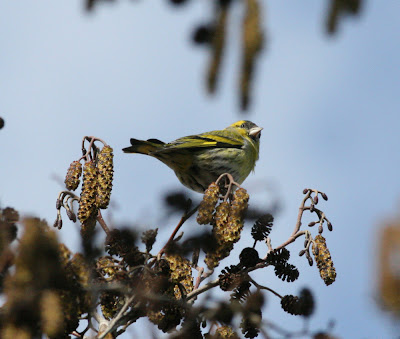 A flock of no less than 100 Chaffinches, feeding along a field boundary and hedgerow, surprisingly failed to contain a Brambling, but a small group of very tame Siskins was easily enough consolation. A Chiffchaff fed amongst the willows and bramble at the lakeside, more Siskins were encountered elsewhere, and a flock of 20 Redwings briefly dropped in.

And so to our quarry; quietly staking out likely areas almost paid off, with birds heard calling close by on several occasions, but no views were gained.... until bumping into local birder Pete Lowman, who kindly pointed us (literally) in the right direction of a group of trees by the lake, where he'd seen a female not too long previously. A long few minutes passed before Laurence eventually picked out a movement in the branches; and thankfully, we were all able to obtain excellent views of a female Lesser Spotted Woodpecker as it fed innocuously close by. 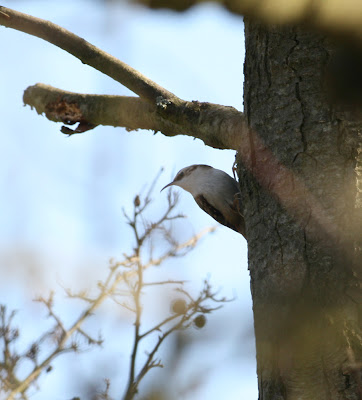 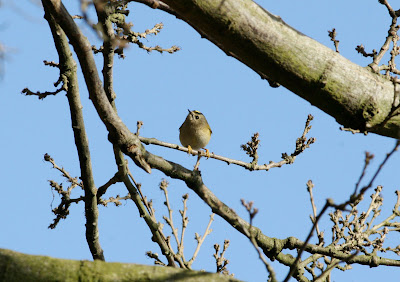 (A warning for other birders visiting the site: Disturbingly, our celebratory cheesecake in the cafe / visitors centre afterwards bore all the hallmarks of being made with large amounts of heavily-cut speed, judging by Laurence's driving, Paul's conversation and all our stomachs on the journey home.)

Posted by Mark James Pearson at 12:28 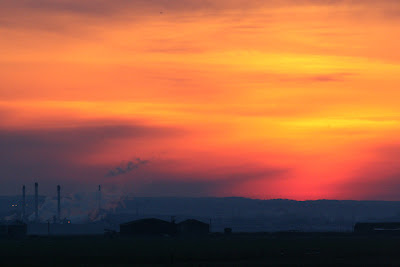 A day's birding in the Garden (or neglected window-box) of England, with Laurence and Paul, in search of Sheppey's classic winter sights and sounds before spring finally stutters in. We picked a perfect day, having not-so-riskily banked on the BBC forecast being completely inaccurate - mainly bright with sunny intervals (as opposed to the forecasted dark low cloud all day), and therefore ideal for potentially enjoying raptors on the wing. 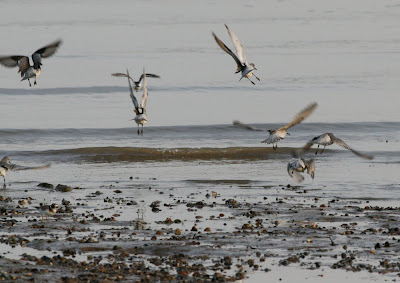 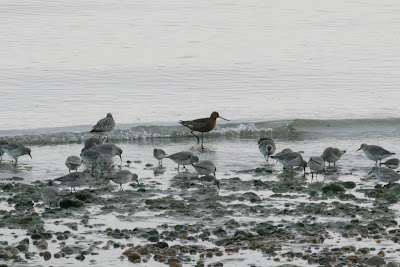 One of the first birds encountered was a ring-tail Hen Harrier, almost connecting with our windscreen as we chugged along the single-lane road; a good harbinger, and through the course of the day, we were lucky enough to enjoy all the potential raptor species within a few square miles. Distant, heat-haze blurred views of a Rough-legged Buzzard perched on a haybail close to the prison weren't entirely satisfying - but watching the same bird giving a stunning performance much closer an hour so later surely was. 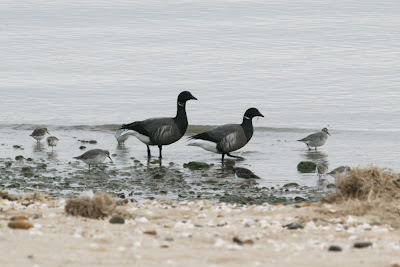 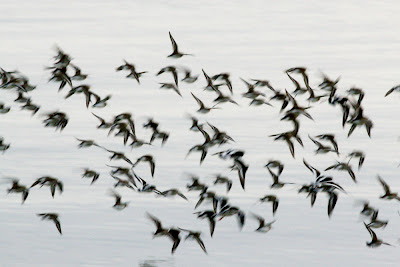 Scrapping gracefully with a Marsh Harrier (presumably on territory, judging by its behaviour and feet-dangling), the bird showed beautifully for several minutes before eventually drifting east. Talking of Marsh Harriers, we encountered at least 20 today - great birds though they are, it's hard to believe they've become the big-shape-in-the-sky, then bit-of-a-let-down equivalent of thermalling Cormorants high over Hackney.

Peregrines were great value as ever, with one particular adult diving vertically into shimmering clouds of Starlings several times (just failing to score); a cracking male Merlin, picked up sharply by Paul, was more successful, and we watched it rip up and gulp down its quarry for a good 15 minutes before leaving it to digest in peace.

Common Buzzard, Kestrel and Sparrowhawk were all present, bringing our raptor species tally to eight for the day - not bad for a single site in the south-east of England.

Several Stonechats and Little Egrets, good numbers of Lapwing, Golden Plover and Shelduck were out on the marsh / in the fields, but a priority was the glorious spectacle that is the high-tide wader roost, and so to Harty for mid-afternoon. A very special experience, with thousands of birds at wonderfully close range and rarely another soul around, it's worth the trip out here for this performance alone.

Knot, Dunlin, Bar-tailed Godwit, Turnstone, Oystercatcher and Sanderling were all present in their multitudes, and 400 Brent Geese grazed in the field behind us (with a few tame birds along the shoreline); a wonderful place just to sit and be quiet for an hour. One godwit was resplendent in full blood red summer plumage, contrasting starkly with its more crptic neighbours. 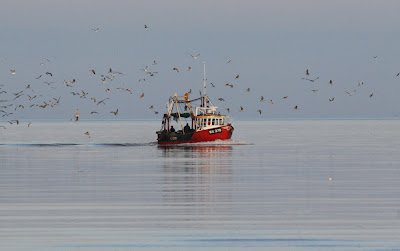 A long, productive day, rounded off by aptly by a Barn Owl as we set off back to the city in the dark. 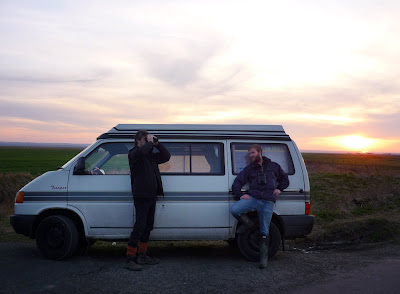 Peter and Jordan relax with the Mothership 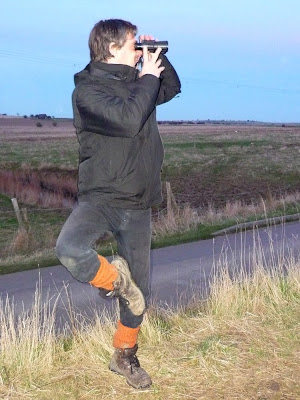 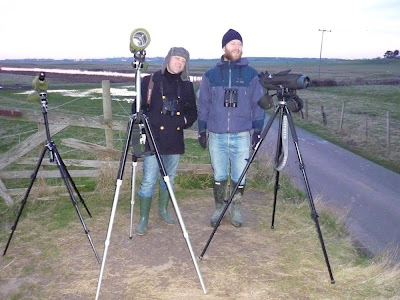 Posted by Mark James Pearson at 22:32