Champions of the Flyway 2017: out of the blocks 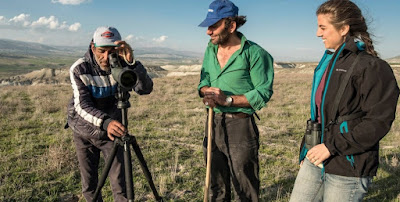 2017's Champions of the Flyway event is out of the blocks and beginning to pick up steam as the race day of 28th March approaches. If you've heard of it - and hopefully many in the birding community have - you'll know that it's a brilliantly orchestrated, fantastically co-operative and (here's the bit that really matters) supremely successful fundraising exercise, with all profits feeding directly into on-the-ground efforts to combat and alleviate the illegal killing of migratory birds.

It's been running for several years, with each year channelling funds into a different countries' efforts to fight the slaughter - this year's recipients are Doğa Derneği (BirdLife Turkey). A fuller explanation of their amazing work and projects is available here, but in a nutshell, they'll be using the COTF funds to fight persecution on the ground at migration bottlenecks, to foster engagement and ownership via various education projects, and to forge strong links and launch awareness projects with Syrian refugees. Fantastic.

The race itself, while hotly contested, is an anomaly among bird races, in that the teams readily share information and actively help each other; however, such an approach is indicative of an event which has fund-raising as its one and only Modus operandi. It's for this reason (and the fact that, last year alone, the race teams raised over £80,000 for the cause) I'm always more than happy to cough up a bit of cash to one or more of the teams involved. This year is a little different, however, in that I'm very lucky to be participating directly, as part of the Birdwatch-Birdguides Roadrunners team.

My team-mates are the wonderful Dawn Balmer and the COTF old hand & logistics wizard Mike Alibone, so I'm in illustrious company. What I lack in comparative illustriousness I intend to make up for in arm-twisting cash-conversion for the cause, so that's where i need your help, dear reader. Throw me a bone, in the form of a very-quick-and-easy-to-part-with sliver of your disposable income, via our just giving page here, and I'll be forever in your debt. Which is no bad thing, especially if you ever need to call a favour in.

Posted by Mark James Pearson at 23:54 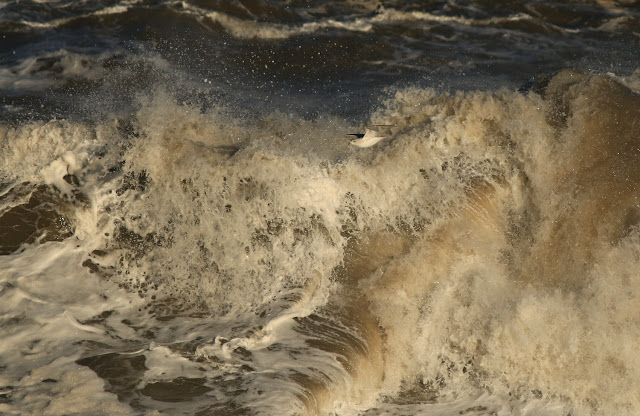 .... only a Herring Gull perhaps, but it was kind enough to follow a surfer's path across the face of a breaking wave, so deserving of its own post I think. 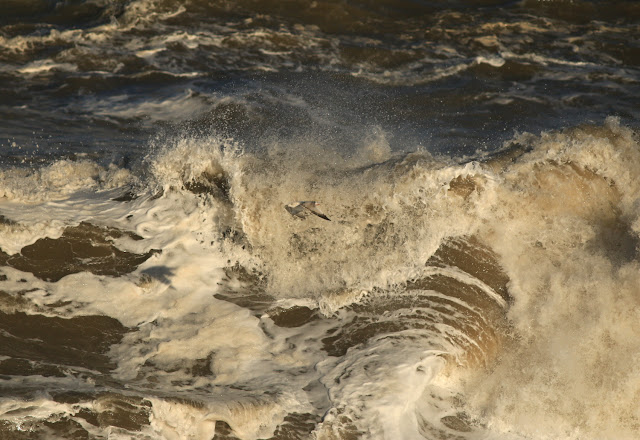 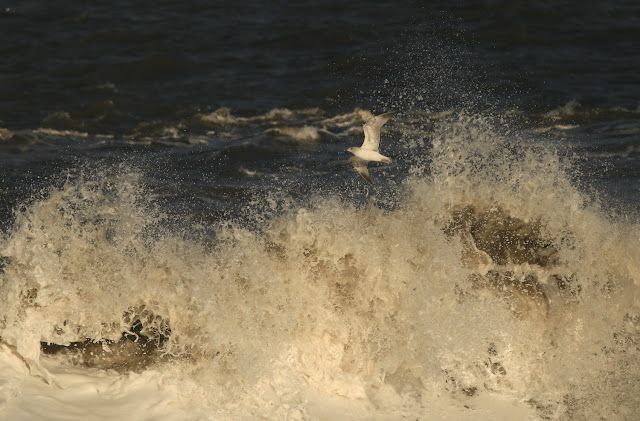 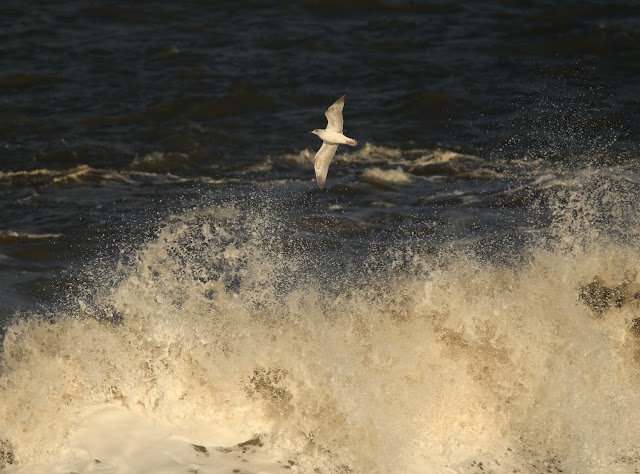 Posted by Mark James Pearson at 12:38 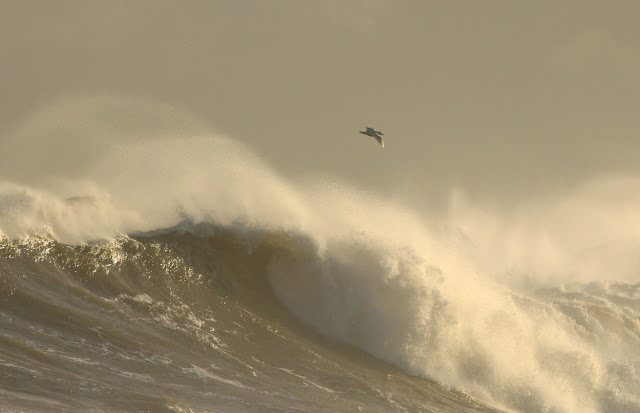 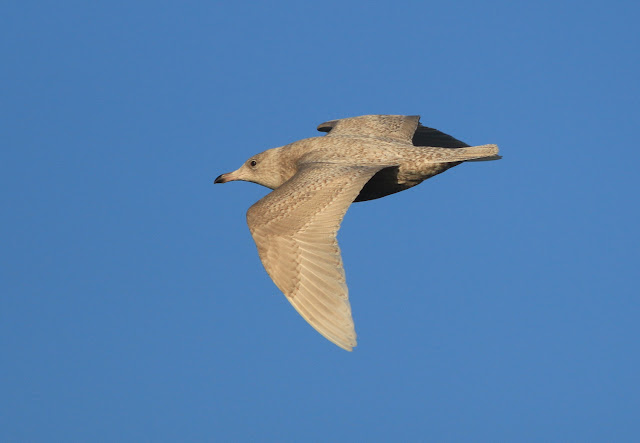 After yesterday's festival of meteorological mayhem and white-winged gulls, today's forecast promised sub-zero temperatures, wind-speeds dropping to moderate and sunny intervals, and with the promise of displaced wanderers tracking back north (or just hanging around), the Brigg beckoned. Long story short, five hours spent out there (mostly on a mesmeringly beautiful, surf- and roller-battered Brigg end) were five hours wonderfully well spent, and a walk out onto Carr Naze for sunset with the Mrs was a perfect was to round off the day. 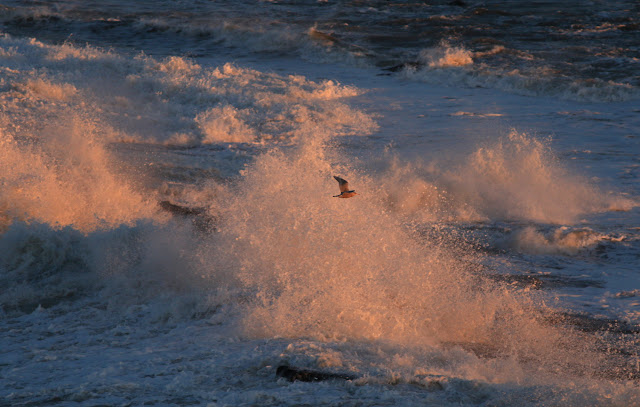 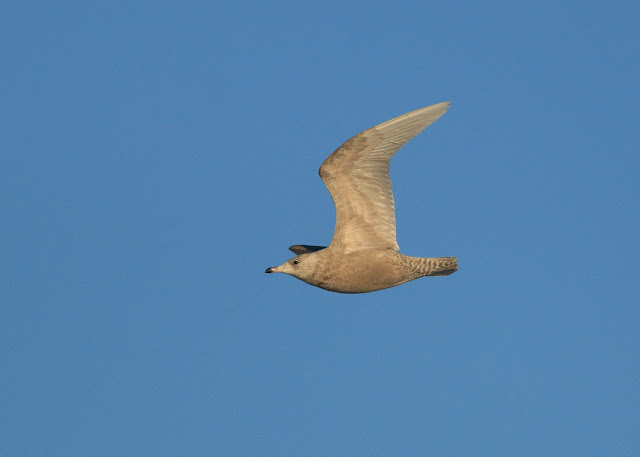 To say the wave action was dramatic would be a huge understatement, a bit like saying that the various Glaucous Gulls I've seen here today were quite pleasant... it was one of those losing track of time days, where you just lap up the circumstances and thank your gods. A minimum of four Glaucs this morning - an adult, a 3cy, and two 2cy's - plus two 2cy's this evening (at least one of which was 'new') - gives me a minimum of five for the day (three pictured); several of yesterday's birds were also identifiably different, and thus I've been lucky enough to bump into at least eight over the last 48 hours. Remarkable, especially considering I've not seen more than two or three in a year here before, despite a lot of efforts at the right times.... 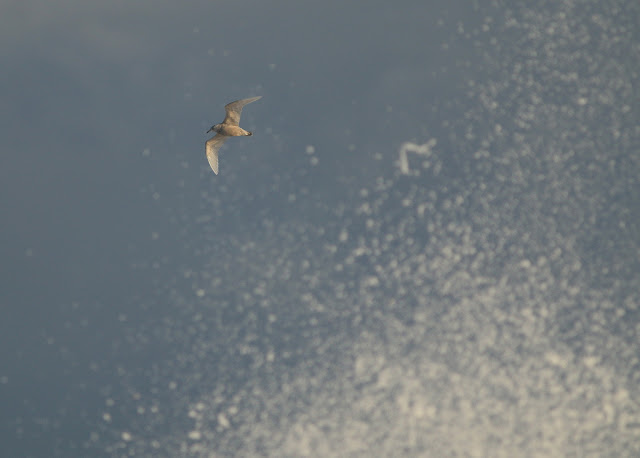 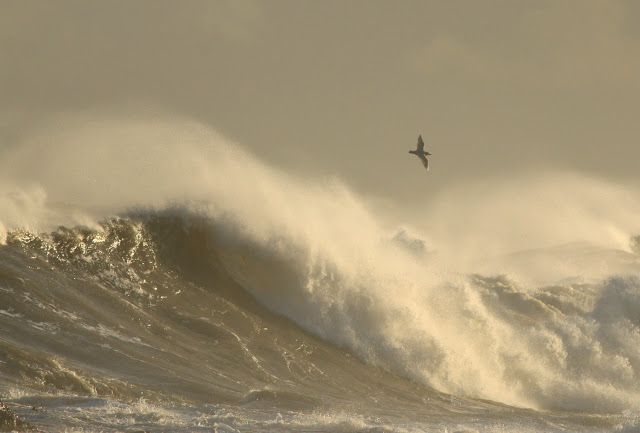 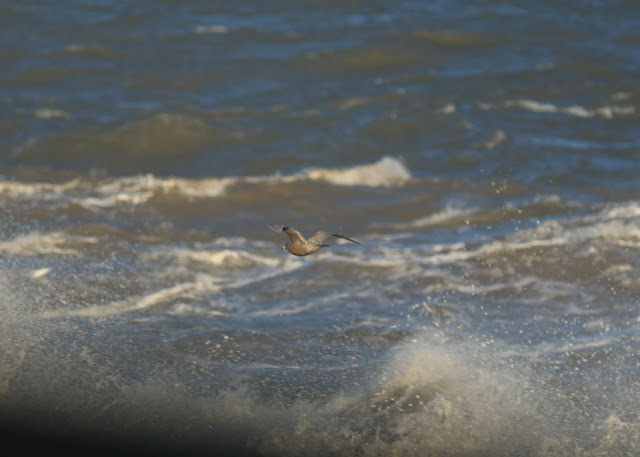 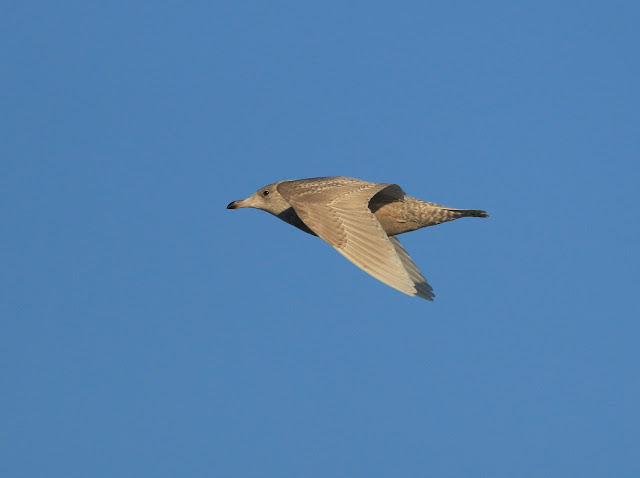 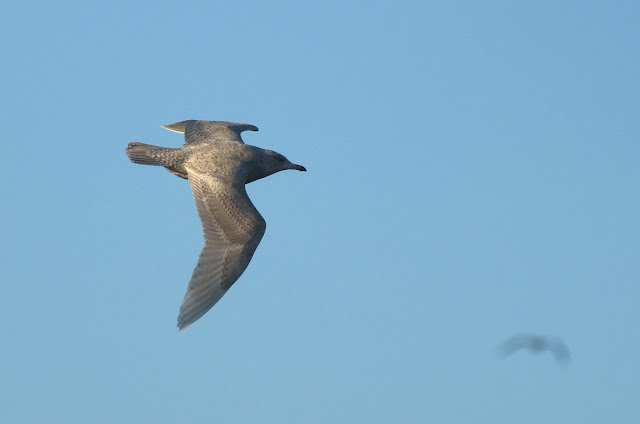 Posted by Mark James Pearson at 23:11 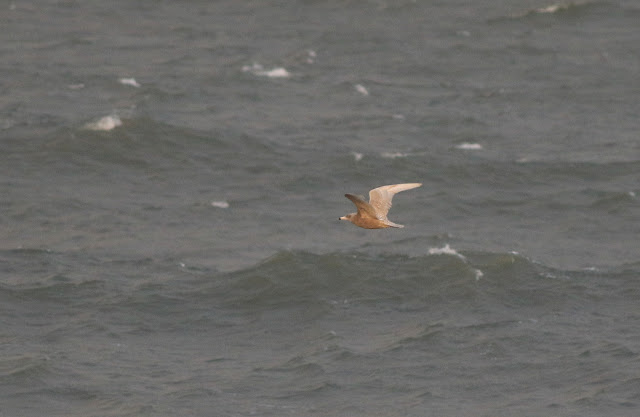 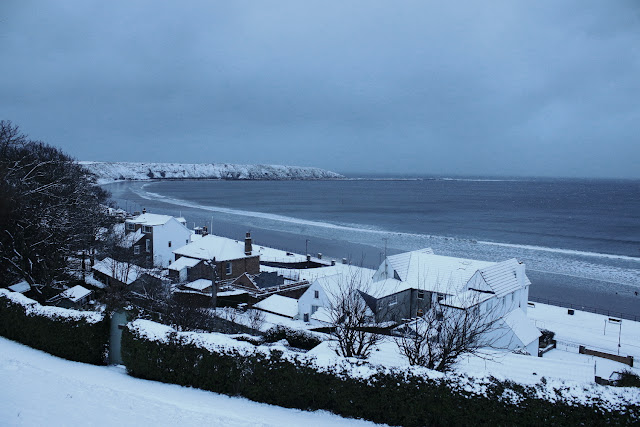 Ah, that's more like it. Unbelievably, today was my first day out actually birding in weeks - after a week in London over Christmas with the bins untouched, a week in France over new year with incidental use at best, straight back into assignment deadline-meeting madness upon return and a talk in Sheffield straight after - so with the predicted gale-force north-westerlies, inclemental maelstroms and storm surge due to hit today, it had to be done. I woke up this morning pre-dawn to find a beautiful scene outside the window of a thick layer of fluffy snow covering all surfaces and flurries swirling in the streetlights. 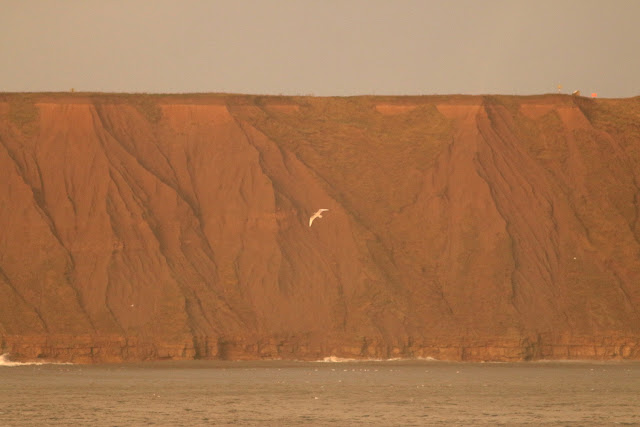 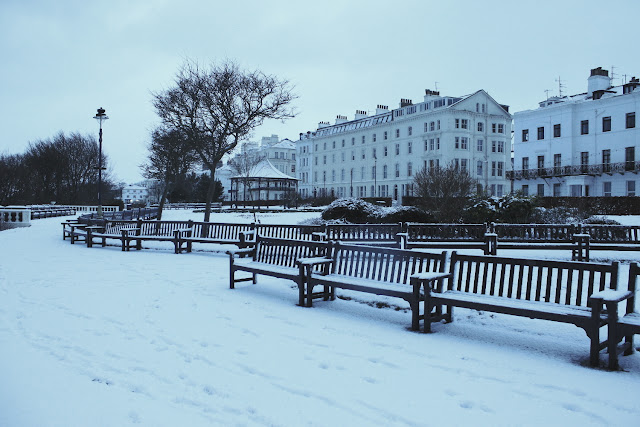 Out soon after, the snow soon turned to sleet and the sleet to rain, but not before I'd hit the seafront, beach and bay corner. By the time I reached the latter, the reality of not being able to physically make it any further was confirmed in comedy style as the wind knocked me backwards onto the rocks, leaving me flapping forlornly skywards in helpless flipped-over turtle style. Time to turn around.... but not before more decent scans of the bay and seafront, where a couple of argentatus Herring Gulls were, disappointingly, the best of the Larus assemblages. 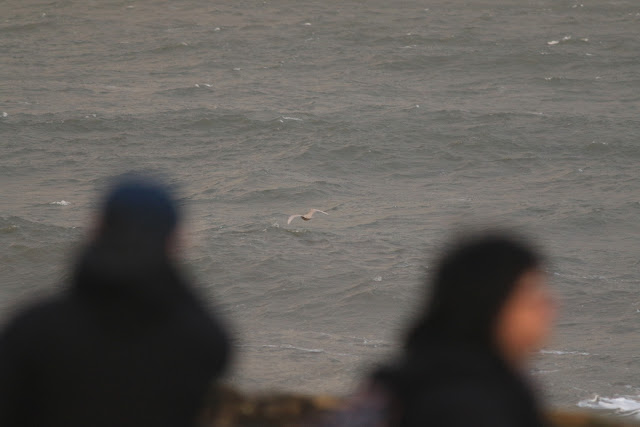 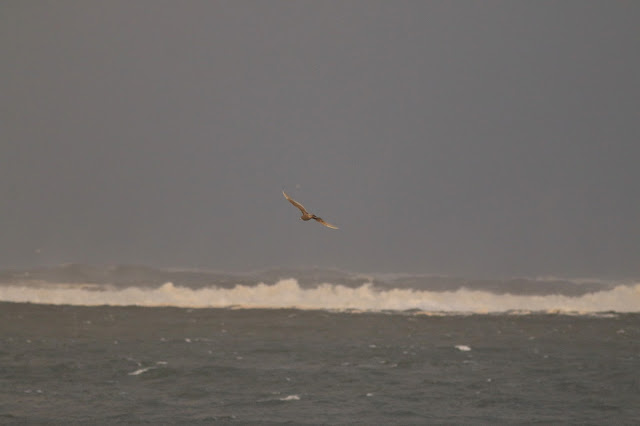 Holed up in a seafront shelter along the esplanade, this afternoon was another scene altogether. I love wild winter birding, especially here in Filey, and it was one of those sessions that makes you forget the fact you can't actually feel any of your fingers or toes. Three hours or so of every type of weather imaginable, the continuingly howling north-westerly, waves that would make a surfers head explode on sight and an incoming, increasingly 'entertaining' tide provided no fewer than four Glaucous Gulls and an Iceland Gull among their wind-battered brethren, battling north or feeding in surf out beyond the Brigg. At one point I'd two Glaucs and the Iceland in the same field of view, and at others, new white-wingers swept by much closer in. Absolute class, and so good to be back in the ring. 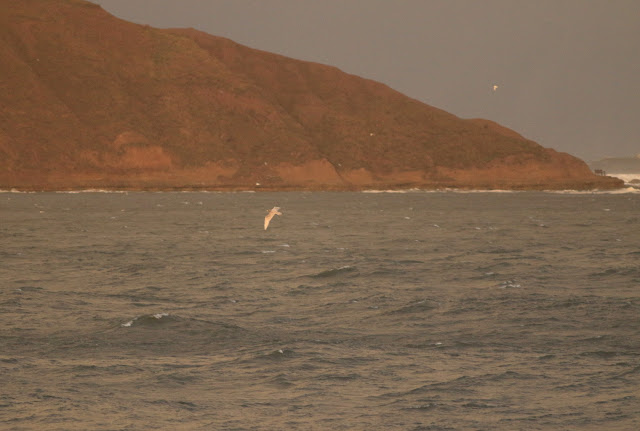 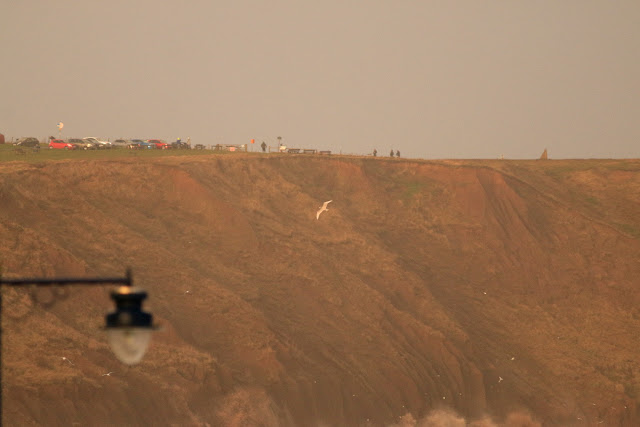 Posted by Mark James Pearson at 17:58