May, the force be with you 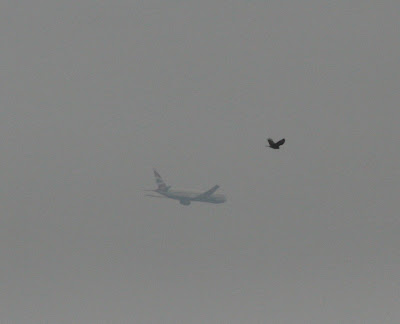 As the summer finally kicks in with a vengeance here in London town, it's a good time to reflect on a highly productive and very enjoyable week's urban birding. May is more often than not a quiet time here in the heart of the city, with the vast majority of migrants having arrived, and suitable conditions for odd flyovers or vague hope of a killer overshoot the only real inspirations to keep hammering away at the local patch(es).

Which happens rarely; but when it does, it's a beautiful thing. Last year's May poster bird here at Stoke Newington Reservoirs was a Red-rumped Swallow, which arrived with a sudden influx of swifts one warm and sunny evening. After another blank session from the Obs platform, and with the moth-trap needing to be set up, in came the swifts and I gave it one last lucky scan.

Having seen countless multitudes of this beautiful little bird in various places outside the U.K., why such a big deal? Because it appeared out of the blue, on my modest-at-best-urban patch, while I happened to looking. Magic and priceless.

A couple of years before, and a similarly blank session around the East Res resulted in a Golden Oriole commuting across the water between the oaks. A Golden Oriole, in a scant row of oaks, in Hackney. Sparkling long-shots in a traditionally quiet month.

But the last week has broken the mold somewhat, in that there's been a steady procession of (locally) quality birds to keep a serious spring in the step. A long sky-watch on the 13th was again quiet, with raptors somewhat predictably having dried up after April's sustained movements - until a last session late in the afternoon produced a ridiculously low, frame-filling Honey-buzzard bulleting north directly over my head from the Obs platform. 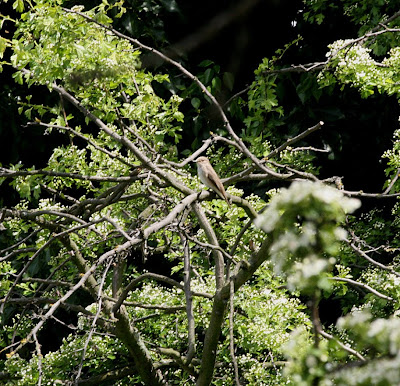 The endless north-easterly airflow finally changed on the 14th, with southerlies and cloud overnight - which brought in both Spotted Flycatcher and Common Redstart to the Res, both the first of their kind to arrive here in spring. The following day's Oystercatcher Bird Race (see below) in suitably warm conditions was, for someone who doesn't usually do such things, a blast; and then back at the reservoirs on the 17th, the spirit-lifting sight of a Turtle Dove (again, in the oaks around the East Res) was another site first and a much hoped-for addition to the local avifauna.

A couple of days later, and back up Tower 42 for the sixth migration watch of the spring. A full account can be read here, but it's worth mentioning, after all the hype, it was one of those days when having faith in the project and happily committing to each and every every six-hour session up on the roof paid out beautifully.

The following day, yesterday, looked good for sky-watching - and so it came to pass, with the glorious sight of two more Honey-buzzards overhead, giving me four in 48 hours (and my fourth and fifth for the week in the capital); wonderful. Amazingly, a lone gull heading east in the sunshine between the two honey-bees turned out to be none other than an adult Kittiwake. May? it's the new April. 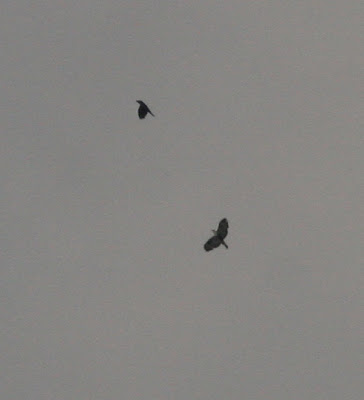 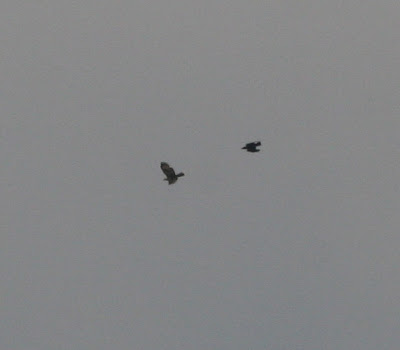 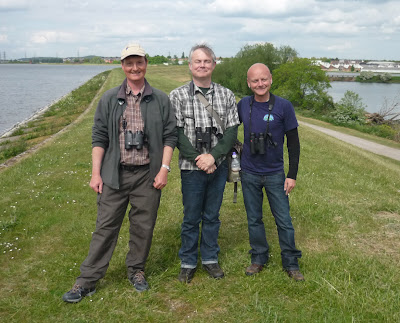 Aching bones and eye-strain are a small price to pay for a very manic and enjoyable day's birding, on account of the Oystercatcher Bird Race - a Transport for London / Natural England event promoting the use of public transport to enjoy the city's wildlife (a noble philosophy, and one which plenty of us happily put into practice on a daily basis).

The basic premise was to record as many species as possible anywhere in Greater London, using only public transport; at least two of the team had to see (or hear) each species, self-sustaining feral populations were allowed, and the finish line - the Transport Museum in Covent Garden - had to be reached by 1700hrs.

The event began at 0630 at the Albert Memorial in Kensington Gardens, with two BBC Springwatch teams and plenty of others - teams from the RSPB, NE, WWT, BTO etc making up a long list of participants - with many teams starting anywhere they wanted within the capital. (Us being generous souls, we towed the line and agreed to make up the numbers at the official start point.)

A cool, clear dawn in Hyde Park / Kensington Gardens and an hour and a half to two hours planned to get what we could there; against an aural backdrop (assault) from the resident Parakeets and under the gaze of Egyptian Geese in the treetops, we mopped up. Woodland / park specialities (in a London context) happily played ball, and as well as all the commoner species, we connected with Nuthatch, Treecreeper, Goldcrest, Tawny Owl, Coal Tit, Mandarin and Red Crested Pochard (and a bonus House Martin). An encouraging 48 species in the first ninety minutes, and some potentially very tricky ones duly nailed.

Onto the Central Line at Lancaster Gate by 0800ish, hopping off at Bank, walking to Fenchurch St and then getting the overground to Rainham station, we were in the Rainham area less than an hour later. We'd pinned much of our hopes and the main chunk of our time on Rainham, but we were banking on it being an educated gamble.

For the next four and half hours or more we hammered the area on foot, covering the West Marsh first, the rubbish tip area (mmmm, the sweet smells of spring), the foreshore, the barges and then back around in a loop (without actually stepping foot on the reserve). God only knows how much ground we covered there, but about 15 kilometres would be a conservative estimate....

We got everything we reasonably expected, including all the breeders (plenty of Sedge, Reed, Cetti's, Common Whitethroats, Skylarks, Pheasants, Linnets, Meadow Pipits etc) and regular migrants (hirundines etc), and the tip provided two unexpected discoveries in the multitudes of Larids - a 2nd summer Yellow-legged Gull, and a pure albino Herring Gull (the latter of course not countable, but if bonus points applied it'd score highly).

A quiet day for wader passage (and passage in general) meant our expectations were low, but plenty of effort resulted in us grinding out Ringed Plovers, Whimbrels, plenty of Lapwings, a solitary Redshank and Oystercatchers. No Dunlin, godwit or long shot, but a respectable haul nonetheless. No Marsh Harrier either, but Common Buzzard, Hobby and Kestrels; no lingering winter ducks, but fine spring migrants in the shape of Wheatear and Yellow Wagtail; no Cuckoo or Whinchat, but truly killer views of the most accomodating Grasshopper Warbler in all of England (if it wasn't a race day I'd probably still be there with it).

What'd been a hot and sunny morning and lunchtime became suddenly windy, then clouding over and duly raining - actually a welcome respite from the heat as we gunned the five km back to the station as quickly as possible behind schedule. Not knowing how many species we were on (70? 75? 80?) and with time running out fast, two hours plus at our final destination was going to be just one at best when we'd negotiated the trains to Blackhorse Road (via a change in Barking).

A quick sub-totalling on the train revealed we were on 82 species - looking good, but with worrying gaps that could use plugging and some good fortune required at the death. And so a whirlwind visit to Walthamstow Reservoirs, a site close to us geographically and emotionally - surely it wouldn't let us down. We were hoping for perhaps four or five new species to bring us past last year's winning score and put ourselves in with a good chance against stiffer and more numerous opposition this year.....

Some glaring omissions at this late stage included Sparrowhawk, Peregrine, Lesser Whitethroat, Grey Wagtail, Green and Great Spotted Woodpeckers, and Common Sandpiper; and with the minutes ticking away we decided to beat a path straight through the centre of the southern reservoirs and back up via the bank of East Warwick.

Scoping a certain favoured spot to the north instantly paid off - a perched Peregrine. Ten minutes later and a Lesser Whitethroat burst into full song a few metres away - two down, and another good omen. Then, a drake Shoveler dozing nearby. To another favoured spot close by, and a close-up flash of blue (Kingfisher) and a familiar kick call (Great Spot) were added within seconds of each other - 87 on the board, with 30 minutes left on the clock.

Talking to Paul W and Pete L, we heard that a Common Sand had been seen in the morning, but had since disappeared and the water levels were discouraging to say the least; speed-walking along the edge of East Warwick - half hoping, half thinking of the tube - and bingo, there it was in front us.

Reaching the main gate with 15 minutes left, we made a dash for High Maynard and a last roll of the die. Conveniently neon in the nearest corner, two Grey Wagtails bobbed along the shore.... and then as if book-end the day on a high, a female Sparrowhawk drifted close by above our heads. Quite how we'd seen Hobby and Buzzard easily but had had to work for the most ubiquitous bird of prey made the late arrival all the more satisfying.

And so back into the centre of London via Tottenham Hale, Kings Cross and finally Covent Garden tube stations, where the elevator spat us out, sweaty and gear-laden, into the rammed streets full of tourists. Arriving at the Transport Museum we were ushered into an underground room where coffee and orange juice barely hit the sides of our our throats as we awaited the remaining teams.

Which took a good while; we tried not to mind that many were late and we could've used the extra time to stake out another few species.... smile and wave, and wait around for the Springwatch teams to show up. Which they eventually did; by then the day was getting on and it was presentation time.

Our ninety species comfortably saw us through in the end, with the runners-up on 86 and other teams mainly in the seventies. At the risk of sounding very on-message, it's a pleasure to win on behalf of the only conservation charity dedicated solely to protecting the capital's wildlife; and as David pointed out, the last thing he won was a Fall LP from the John Peel Show, so surely even more deserved....

Huge appreciation goes out to our good friends Des McKenzie, Paul Whiteman and Dominic Mitchell for their assistance - thanks chaps 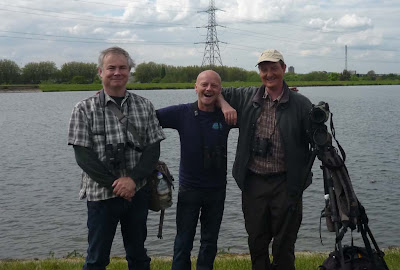 (No DSLR today so our pretty faces are as good as it gets...)
Posted by Mark James Pearson at 23:15