A trying period to say the least; better to accentuate the positives. One of which was a cracking adult Long-tailed Skua, whipping eastbound just above our street's chimney pots on the stormy evening of the 23rd, just as we'd begun the two-minute walk to our local around the corner. A heart-stopping sight and a very lucky strike; the irony of my best find of the period coming while not even actively birding was far from lost over the following days.


From there on, every day in the field, rain or shine (or sea fret, or gales), usually for most of the available daylight. Personally, it's been a very poor spring, but that's the way it goes - last spring was excellent, and it all balances out in the end....

Trading Places - birding adventures from the East End to the east coast (Birdwatch, May 2013) 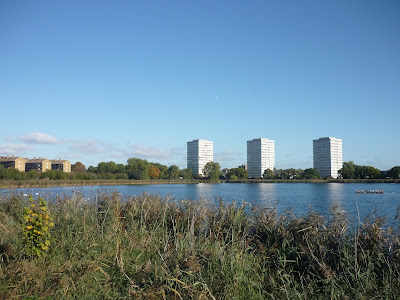 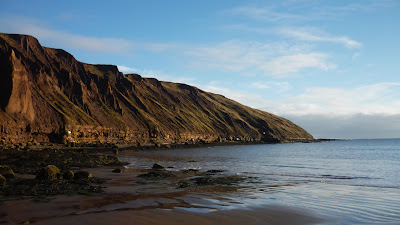 Posted by Mark James Pearson at 23:43 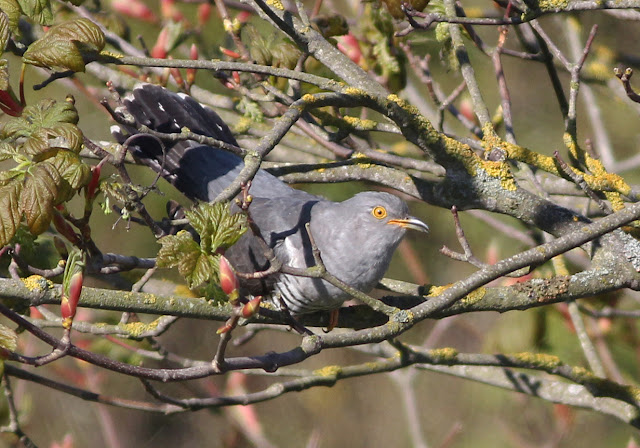 From an otherwise fruitless sky-watching session yesterday here in Filey... 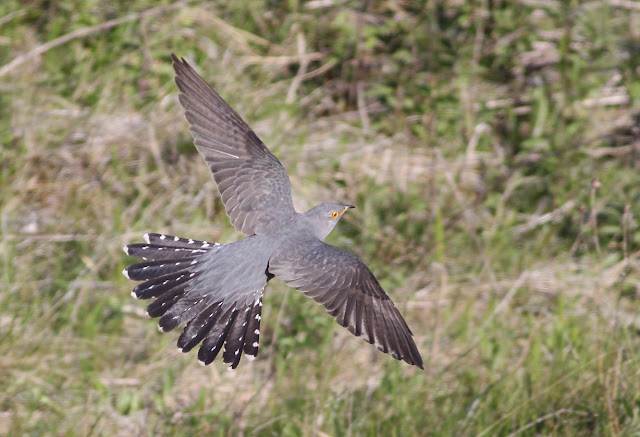 ..... this male Cuckoo appeared just below me in the scrubby copse along the undercliff, unperturbed by the tourist masses on the beach just below him (and myself and various occasionally interested passers-by above). 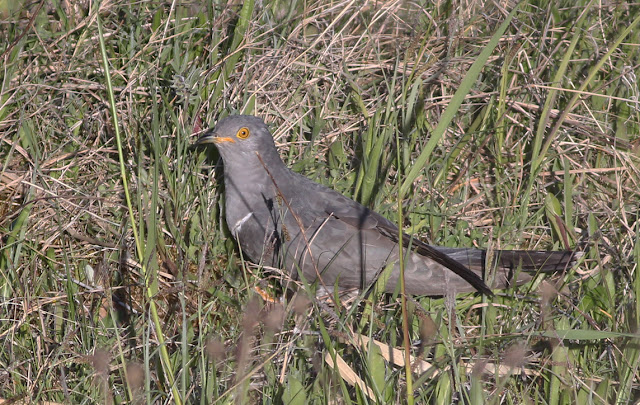 A joy to watch and photograph, as he sang beautifully (while gyrating somewhat comically), put on a few fly-throughs, and then settled in the grass close by to pluck multiple caterpillars from the stalks.

It seems like an age since I was lucky enough to get such close and entertaining views of this charismatic, iconic and rapidly declining species; hopefully it won't be so long before the next time. 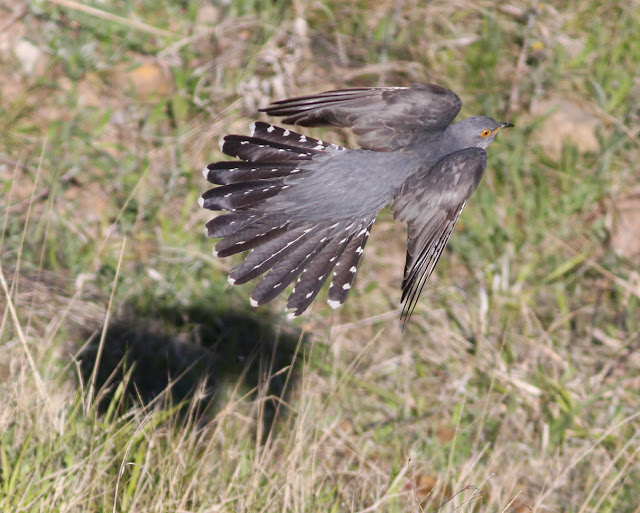 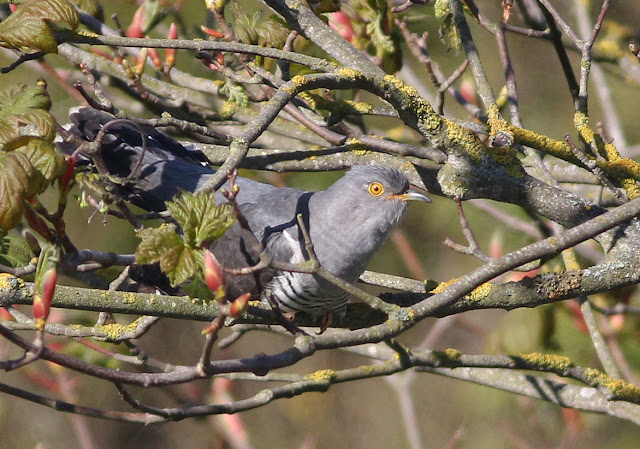 Posted by Mark James Pearson at 20:57


There's always tomorrow..... On an ever-extending losing streak, and yet seemingly unable to leave the table while there are still dwindling chips to play with, these last ten days have unfortunately reinforced both this spring's refusal to play nicely and the use of lazy gambling metaphors.


Out in the field pretty much every day over the last six weeks or so, for at least several hours at a time (and often several multi-hour sessions per day) is a state of play that increasingly strikes of punishment gluttony, which isn't easy to deny. It's the time of year when anything can happen - even in unfavourable conditions, and in adverse circumstances; and yet, against all odds, effectively nothing has (at least, not until I finally blinked on Saturday morning). 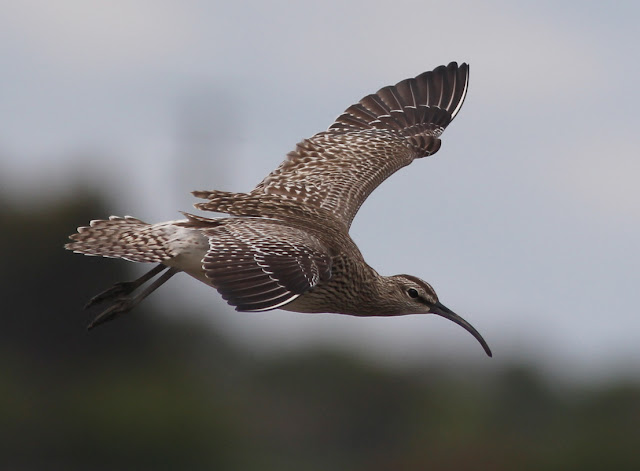 After several days pounding the paths but struggling to justify a notebook entry, the 15th finally provided a little inspiration in the shape of south-easterlies and showers early on, which, after most of the day in the field, at least produced a scattering of fresh-in migrants: a Pied Fly and a male Common Redstart in Long Lane, a Spot Fly in the Top Scrub, four Wheatears in the fields and half a dozen Lesser Whitethroats at the tip, with additional single Pied and Spot Flys in Church Ravine late on. Something to work with at last.....


But promising conditions for the 17th - south-easterlies, overcast, misty - proved beyond a shadow that no matter how conditions and timing may conspire to (justifiably) raise hopes, there's no room for any sense of entitlement, failing to produce a single genuinely new migrant in many hours tracing and retracing the circuit.


For the 18th, less welcome conditions and almost as quiet, but for four drake Goosanders battling into the strong north-westerly, a wonderfully accommodating Whimbrel at the Dams, and various waders on the move or touching down on the Brigg, including Sanderlings, Turnstones, Knot, Common Sands and Dunlins. Of passerines, again, not a single genuine migrant.


And so with good friends having arrived that evening and with heavy rain forecast until at least lunchtime the following day, it was time to put the Leicas down and knock back a few glasses. What could possibly go wrong?


Alas, the gods were in particularly malevolent mood, invoking the Law of Sod to a comical degree. As I rose later than usual the following morning, what was strutting around on Carr Naze (part of my daily circuit for each of the last 4,000 days or so) like a Robin with extroversion issues but a stonking male Red-spotted Bluethroat. You've got to laugh, which I involuntarily did when the text came through, before trundling up (after a leisurely breakfast, in the spirit of being less hassled about such things these days) and enjoying what was a truly stunning little bird, as yet untrampled by the masses and showing off impeccably.


The following day (19th) and, despite a hangover from the previous night's house-warming party, up and out early and onto a Carr Naze encouragingly smothered in sea fret; multiple fine-tooth combings of here and all the other usual local sites produced a few new arrivals (with Sedge Warbler, Whitethroats, Willow Warbler and Chiffchaff all on the cliff slope), waders on the move (inc. Grey and Golden Plovers and more Whimbrels), and several Spotted Flycatchers in Long Lane and Church Ravine. Not forgetting the Bluethroat, which allowed me to pretty much sit beside it as it sang into the fog.


As for the 20th, 21st and 22nd, consider the equine carcass meticulously and consistently flogged, with barely a new arrival to trouble the notebook or camera. With salt in wounds provided by the multitudinous, zombified dog-walkers and their wrecking-ball companions, an acute awareness of habitat limitations and frailties, and the taunting barrage of target scarcities littering the coast via numerous grey squares on the Birdguides map, it's been a period, and to a great degree a season, to avoid dwelling on. Still, there's always tomorrow.....
Posted by Mark James Pearson at 12:57 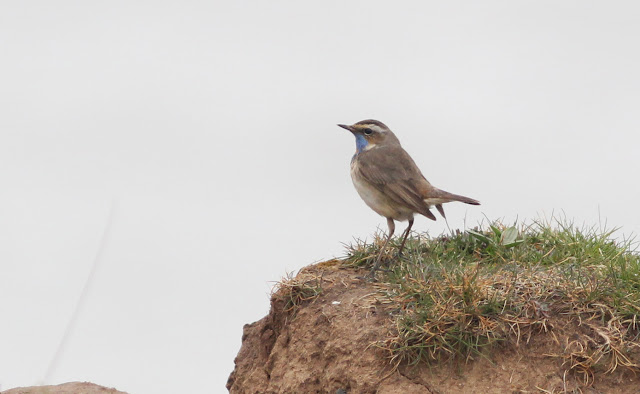 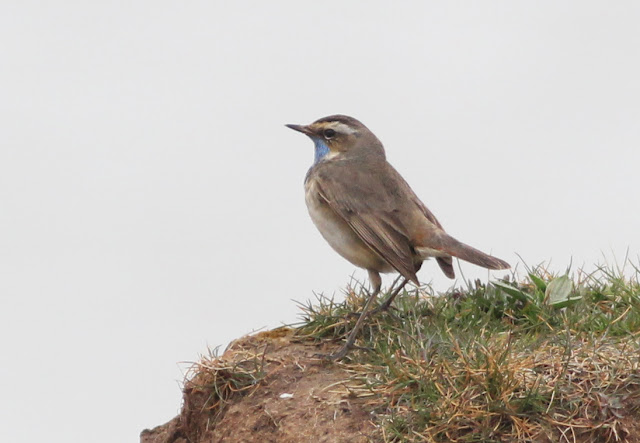 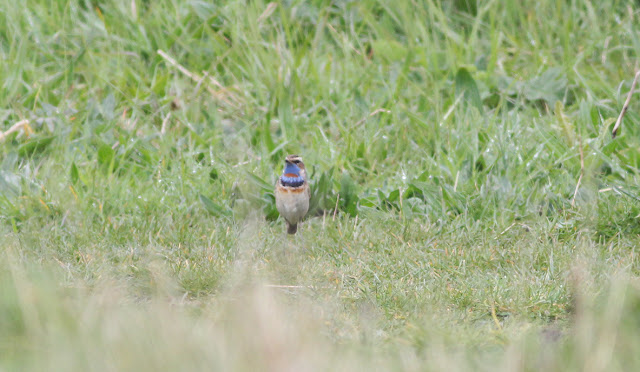 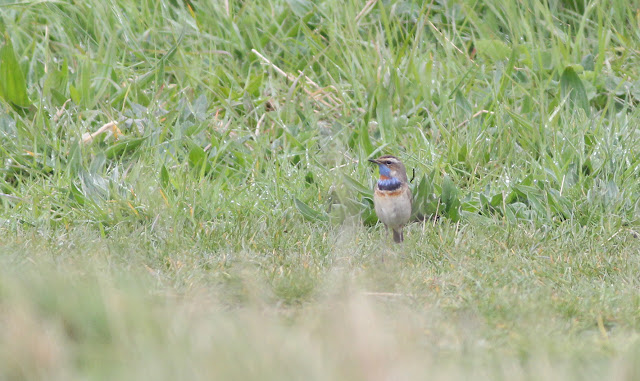 Posted by Mark James Pearson at 19:13

South-easterlies, overcast skies, frequent showers, mid-May.... at last a forecast to relish, and so pretty much a full day in the field, from the murk of post-dawn to the sunshine of late evening. 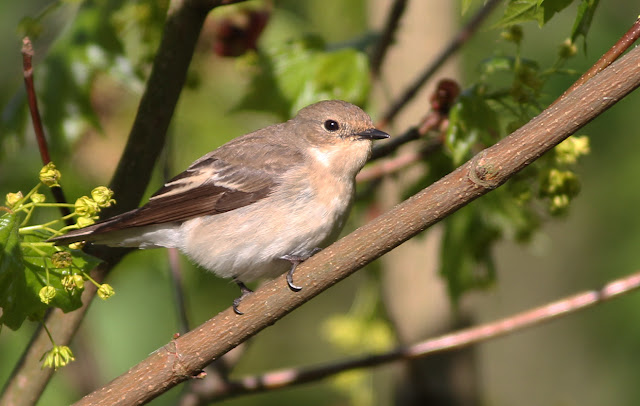 Numerous fine-tooth combings of all available cover in the northern area (including Long Lane, Top Scrub, Long and Short Hedges, Arndale and the Tip multiple times) teased without ever truly providing; a sprinkle of fresh-in Pied Flys, Common Redstarts, Spot Flys and common warblers (especially Lesser Whitethroats) were very welcome and provided the impetus to keep going, but the hoped-for special one failed to materialise.

No matter, it seems all sites to the south of us (inc. Flamborough and Spurn) were equally frustrated, while those from Scarborough north to Teeside were well-served with seasonal scarcities; such arrivals are often accordingly localised, and it was a pleasure just to see a few quality migrants. And there's still time on the clock before the spring ebbs away..... 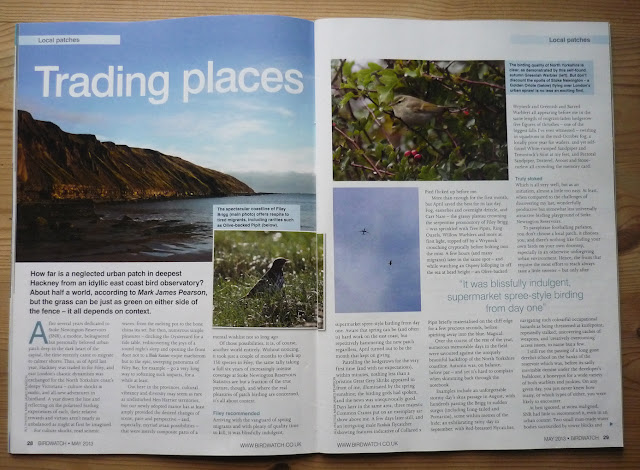 A little shameless self-publicity to start the week - my latest article for Birdwatch magazine is in this month's issue (May 2013), this one dealing with the contrasts between inner-city patch-birding in deepest London and latterly swanning around an east coast observatory (i.e., here at Filey)..... 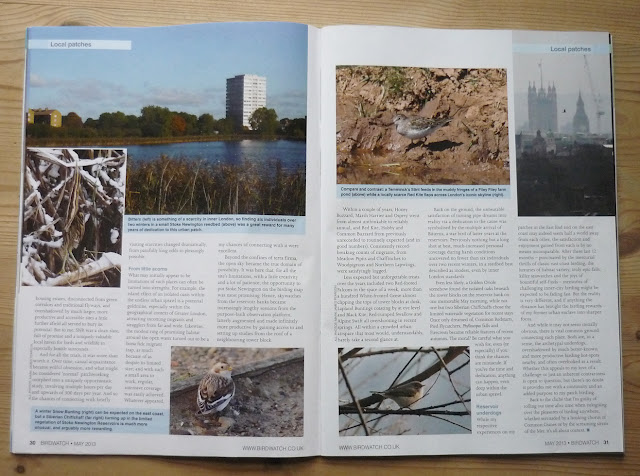 Posted by Mark James Pearson at 12:12


Not the most auspicious or inspiring of periods here on the North Yorks coast, but not for want of trying.
Pretty much every day out on patch, and each brought new arrivals or memorable sessions in some shape or form, but the desired fall of migrants and / or scarcity ultimately failed to materialise.


Of expected migrants, warblers have been arriving in good numbers throughout, with all eight common species installed; hirundines continue to flow through, and Swifts are now happily a daily fixture.

Wagtail passage has been notable, with Yellows particularly plentiful this spring (on a daily basis) and Whites on several days; odd Tree Pipits have also appeared, but visible migration has been generally slow. But for local breeders (including Peregrines), raptors have also been thin on the ground, with efforts from my favoured watchpoint producing a single Marsh Harrier (5th) and not much else.


Two Greenland-type Wheatears were on Carr Naze on 2nd, and an Acredula-type Willow Warbler was at the entrance to East Lea the following day, strongly hinting at northbound long-distance migration happening quietly in the background; rather more local was the breeding Barn Owl which kept me entertained on the morning of the 7th.


After focusing much attention on the sister wetland sites of the Dams and (especially) East Lea, brief showers on the 8th brought success in the shape of two Wood Sandpipers (a patch first) and a Bar-tailed Godwit; other migrant waders have included odd Whimbrels and Common Sandpipers.

More brief showers overnight inspired a little more hope for the 9th, and a full circuit of the northern area from first light, while hardly overflowing with new arrivals, at least produced quality migrants in the shape of two Whinchats on the cliff top and two female Redstarts in the scrub at the Tip.


While it's not been the most thrilling of springs thus far, there's still plenty to play for over the coming weeks....

Posted by Mark James Pearson at 18:44