Siberia to Africa via Filey 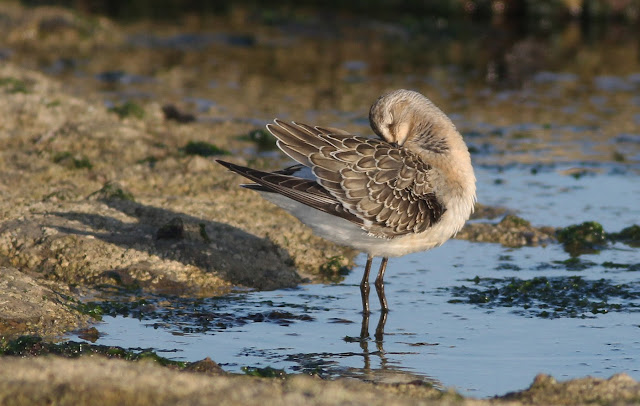 It's been a rollercoaster few days here in Filey, deserving of a more comprehensive bulletin, to follow in a day or two; for now then, a thrillingly tame and subtly beautiful Curlew Sandpiper I stumbled upon (almost literally) at the end of the Brigg this evening. 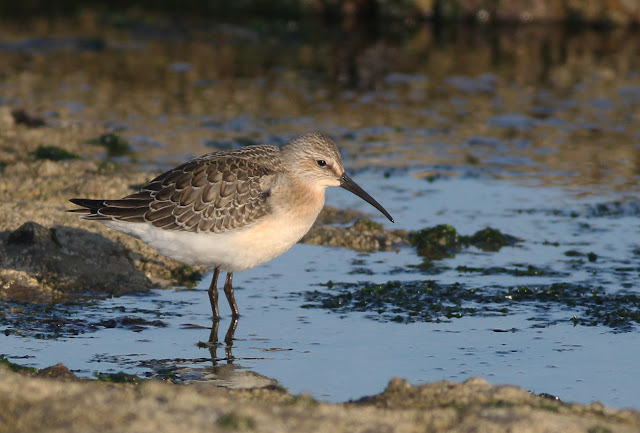 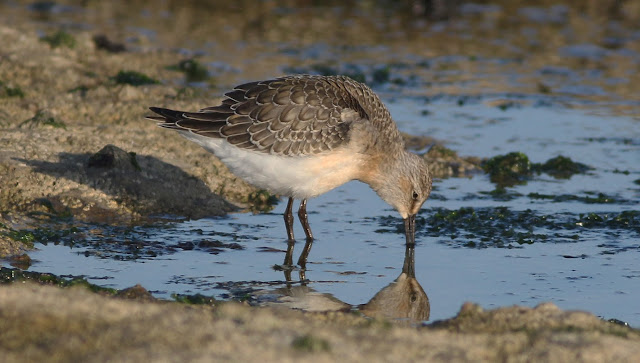 
More than a fortnight has somehow flown by since my last summary of local endeavours, and so time rattle through the highlights before more begin to amass in the notebook and hard drive.....

The second week of August began positively, with a smart adult dark morph Pomarine Skua, over a hundred Manxies and a couple of hundred Oystercatchers through on a four-and-a-half hour morning sea-watch on the 7th (as well as three Minke Whales - they're still here, just fewer and further between....); a quiet couple of days then followed, before a walk out on the Brigg with friends on the 10th produced a Curlew Sandpiper calling and circuiting for a short while before heading off south - the first of the year here (and my first ever for the patch).


The following day, and the lure of the sea again won out; with the winds veering slightly north of west in the afternoon, maybe a few shearwaters would finally be on the move. As it turned out, a good call, and another four-hours plus from the hide - after a very quiet first couple of hours - produced 75 Manxies, five Sootys, and a cracking Cory's, cruising slowly north at 1820. Add on the bonus of four Minkes, and it was quite an afternoon.


Another quiet few days followed, with the wind persisently in the west or south-west; a kick around the bushes on the 18th could've been worse, with the first Tree Pipit of the autumn in Short Hedge, a dozen or so Willow Warblers and a few fresh-in Sylvias. Another evening walk out onto the Brigg with Amity in warm, dull conditions once more struck lucky, with three Roseate Terns calling loudly and buzzing around the rocks (and tourists) for a good half hour or so. Again a hard bird to catch up with locally and again a personal patch first-for-the-year.


Over at the Dams, waders have been consistent and varied, with several Greenshank, up to double figures of Black-tailed Godwits, a handful of Dunlin, a couple of Ruff, up to eight Snipe, up to 85 Lapwings and the odd Green Sand usually present. However, the highlight there came on the evening of the 20th, when two Garganey gave themselves away for a while in amongst the Teal (never to be seen again).

The last couple of days have been quiet, with unhelpful conditions ensuring passerine migration is still to kick in and the seabirds have yet to step up a gear. That said, looking through the notebook for this last couple of weeks, it's been rarely dull, with plenty of highlights to enjoy.


And with south-easterlies and weather fronts - and a very tasty-looking pressure chart for the next few days - arriving as I write, here's to the next bulletin......

Posted by Mark James Pearson at 14:31

Part two of my article about our extraordinary influx of cetaceans here on the North Yorkshire coast was published this week by Birdguides, but can be read free-to-view via the link below:

Postcards from the edge: Invasion of the cetaceans, part two 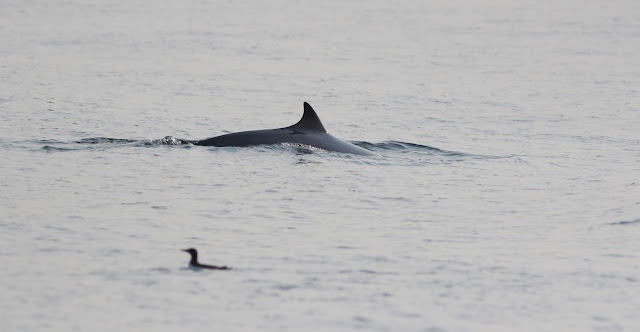 Posted by Mark James Pearson at 22:30 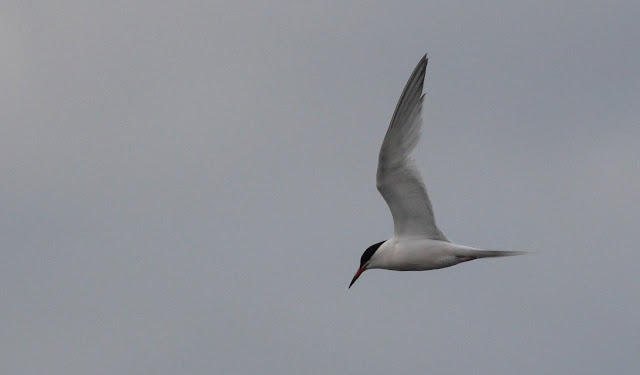 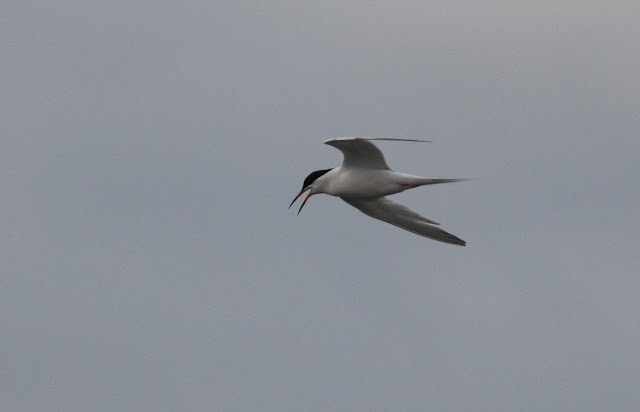 Otherwise engaged over the last couple of days (trying to finish a paper for the next London Bird Report amongst other things) but safe in the knowledge that the south-westerlies have persisted and the skies have remained clear, the Mrs and I both felt like an evening walk, and so took off along the cliff paths and down onto the Brigg just after high tide. 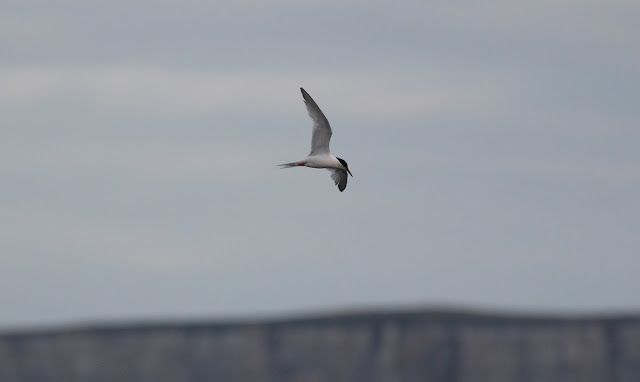 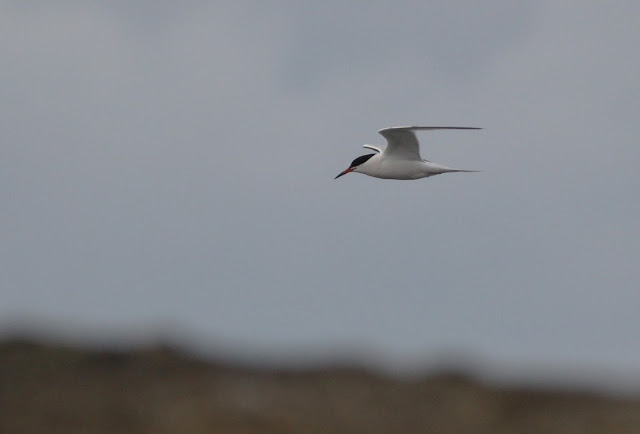 Enjoying the waders and seal pups towards the Brigg end, I was delighted to hear that fantastically distinctive call above me ("like the other tern calls played backwards", as Amity brilliantly put it at the time), and looked up to find three Roseate Terns patrolling the rocky shoreline. 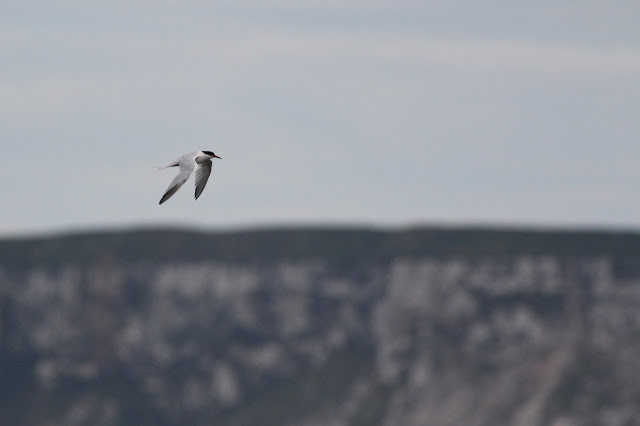 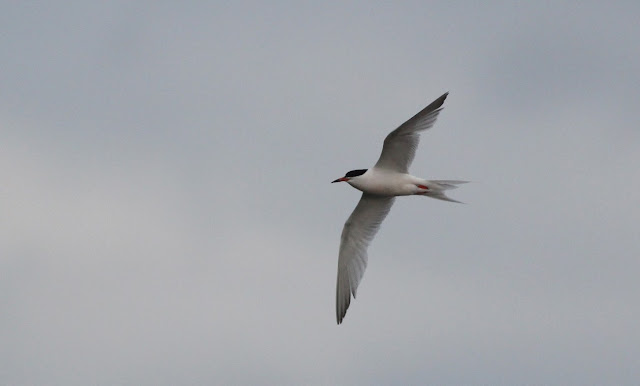 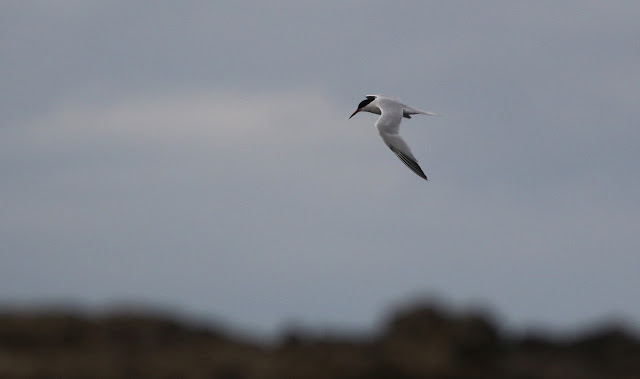 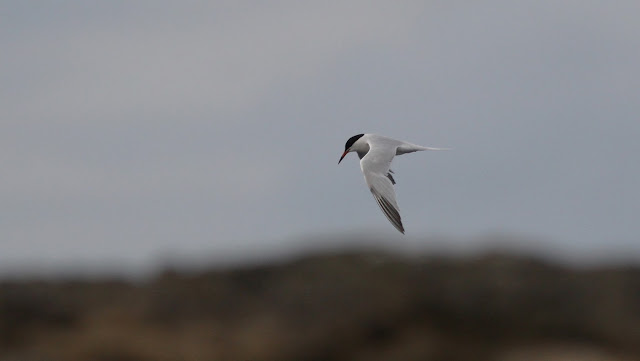 Posted by Mark James Pearson at 00:42

Published this week by Birdguides, the article is now free-to-view on my wordpress site via the link below (with apologies for the previous subscribers-only link):

Postcards from the edge - Invasion of the cetaceans (part one) 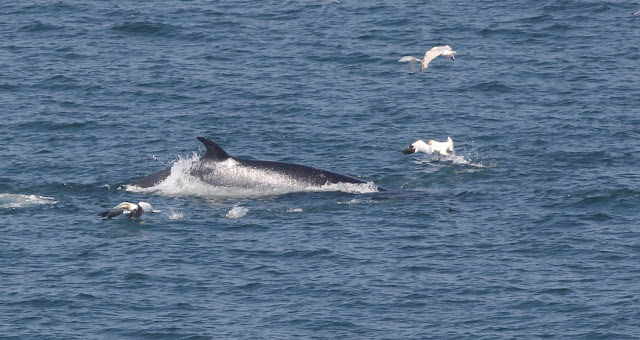 Posted by Mark James Pearson at 12:49 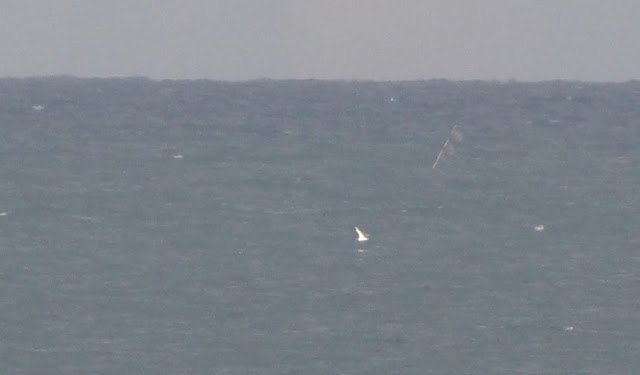 Just back home after an excellent seawatch from the Brigg hide, punctuated by dramatic thunderstorms, huge double rainbows and stunningly beautiful light over the North Sea. With the wind swinging into the NW, however locally or lightly, it was hard to resist - especially at this time of year - and I'm glad I cracked (best not to mention what I should've been doing). 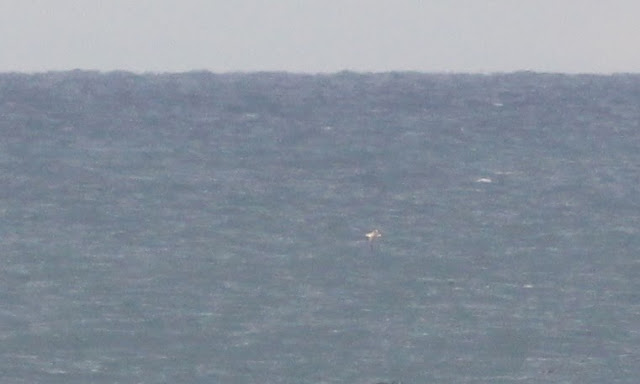 The stand-out highlight was a cracking Cory's Shearwater ambling lazily north at 1820 in perfect light and practically in slow motion (indicative of this most laid back of seabirds); it even cruised within the same field of view of the aforementioned double rainbow at one point, leaving me wondering if my drink had been spiked. 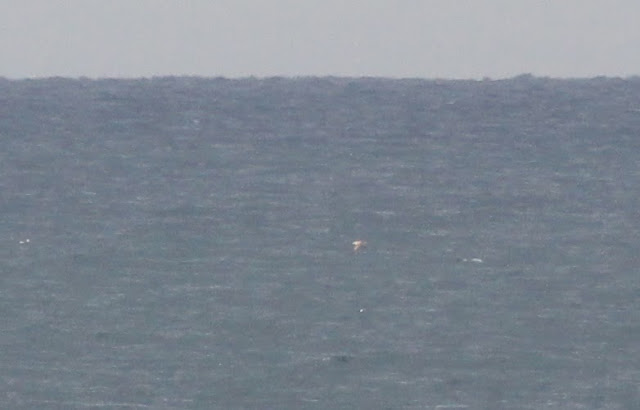 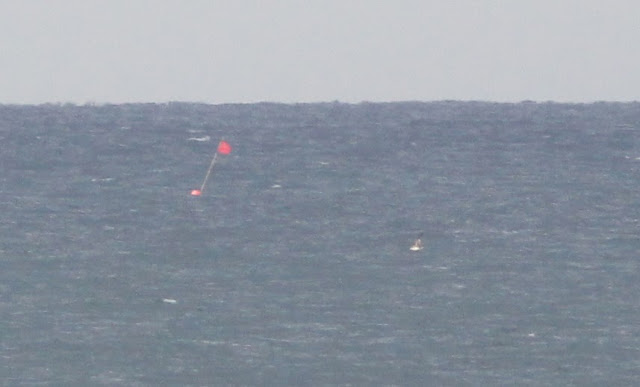 Posted by Mark James Pearson at 21:27 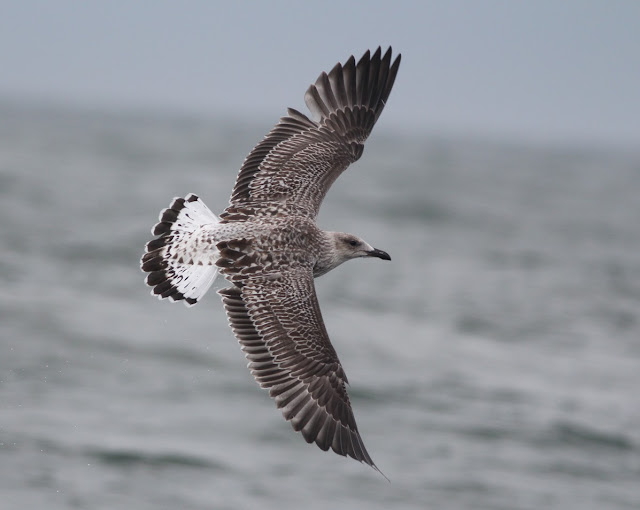 Taken a couple of days ago aboard a four-hour exploratory pelagic into Bridlington Bay, south-east of Flamborough Head, these two smart looking juveniles were the pick of the bunch around the boat, attracted by chum and with us for much of the trip. Overall pretty scant returns (a few Manxies, a Bonxie, a few terns and waders etc.), not entirely surprising given our route and the lack of favourable conditions or indications of movement over preceding days. 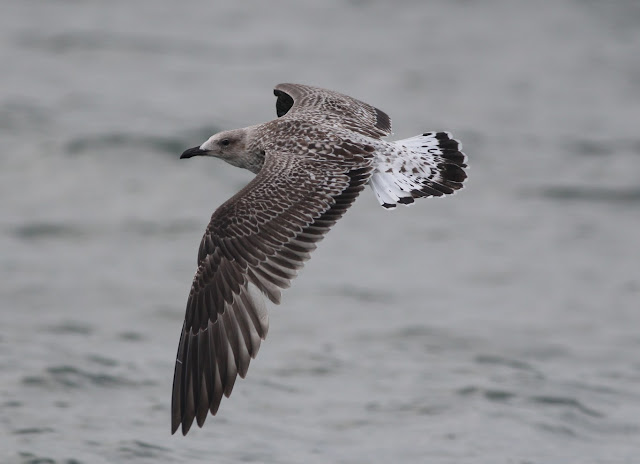 Still, an interesting experiment and good fun thanks to the excellent team aboard; if we can get just a few miles further north into Filey waters, we may still catch the hitherto guaranteed cetaceans and seabird feeding flocks of recent weeks..... 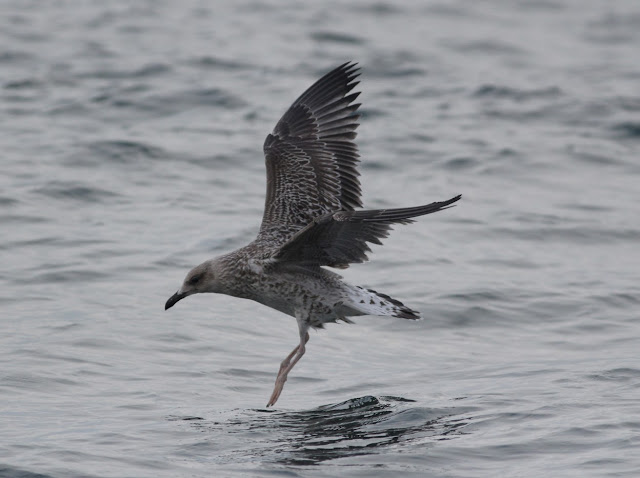 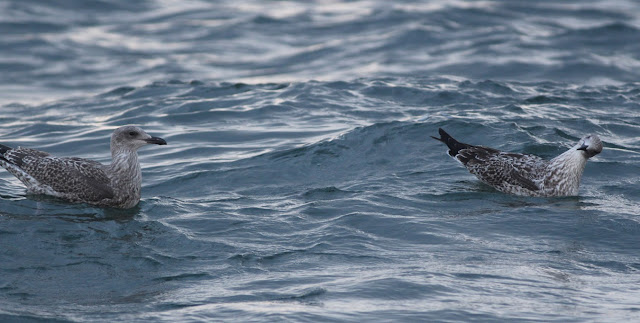 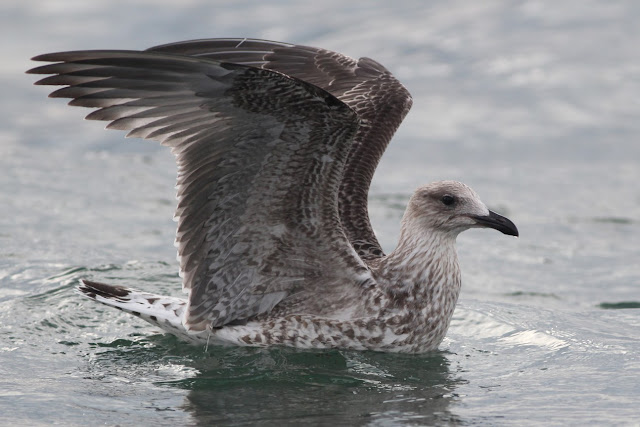 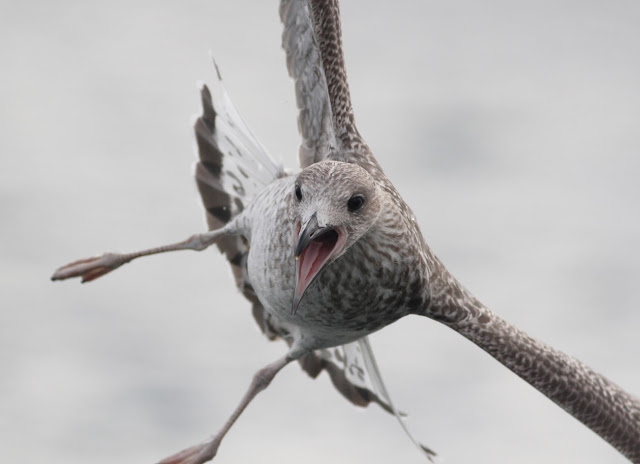 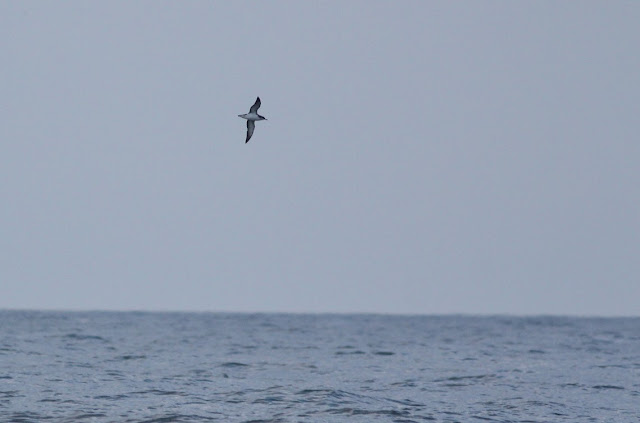 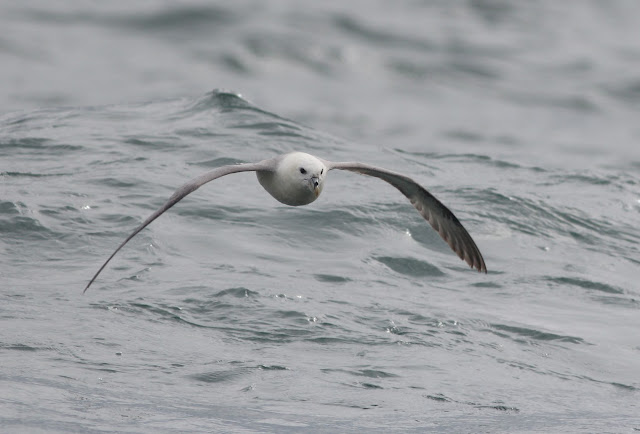 Posted by Mark James Pearson at 12:26


An enjoyable and pleasantly varied twelve-day stretch here in Filey; once again the extended time-frame for this bulletin happily reflects not a lack of material (as might be expected at this time of year) but, on the contrary, plenty of other subject matter to plunder and a reflection of much spare time spent out in the field (as opposed to indoors, messing around with blogs and the like).


Efforts have been focused both on the Dams for a rich and varied turnover of passage waders, and the Brigg for passing, resting and feeding coastal species. Both have entertained greatly over the period, ensuring the expected midsummer doldrums effectively failed to materialise at all this year.


Beginning at the Dams: despite the tall vegetation surrounding the pools (due for a cut this week, so it may well get better still anon), the exposed edges of mud have consistently pulled down a range of waders - hence, daily visits, often early in the morning and then at various other times of day depending on conditions.


The turnover of species has been highly entertaining, and (while not always entirely rain-dependent) often much more dynamic after thunderstorms and weather fronts have moved through. In the last fortnight, I've caught up with Avocets (three), a Little Ringed Plover, Lapwing (up to 56), Wood Sandpiper (several), Green Sandpiper (up to five), Common Sandpiper (up to five), Redshank .....


..... Greenshank (up to three), Dunlin (up to eleven), Black-tailed Godwit (up to eight), Curlew, Whimbrel (up to four), Common Snipe (up to three) and Ruff (up to seven) at this comparatively tiny site alone, totalling fourteen species there.


On / over the Brigg, meanwhile, and the roll-call goes on: Ringed Plovers (up to ten), Purple Sandpipers (up to seven), Golden Plovers (a handful through and odd ones down), Knot (big numbers during sea-watches of up to three hundred, and up to sixty on the Brigg), Sanderling (over a hundred through on good days, and usually at least handful in situ), Turnstones (ditto)........


..... Oystercatchers (ditto), Dunlins (three figures through on several days, and up to 25 present on the Brigg), Common Sandpipers (odd ones through and down), odd Green Sandpipers and Greenshanks through, occasional Bar-tailed Godwits, Curlews, and Whimbrels (impressive three-figure tallies, including many large flocks).


So without really trying - or indeed the presence of any scarcer possibilities (Spotted Redshank, Little Stint, Curlew Sandpiper, you know where we are) - twenty-one wader species have entered the notebook within the last fortnight.


A Garganey (which we found skulking at the Tip pools on 4th) was a nice bonus a few days ago and only the second of the year locally; it later relocated to the Dams, and was still around the next day at least.


Otherwise, the sea has been relatively quiet, with tern, skua and shearwater passage pretty muted so far, and on the land, migrant passerines are effectively yet to register. No bad thing on either score, it'll all happen soon enough, and lucky for me (and gods willing) I'll be in pole position when it does; watch this space. 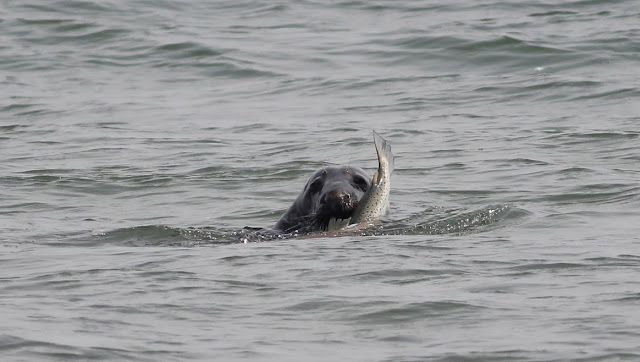 Posted by Mark James Pearson at 17:27