Part four of an ongoing effort to both blog more and cull the photo mountain this year, here's the first passerine to feature - Pallas's Leaf Warbler, a jewel-like waif from the mountain forests of Siberia eastwards.... as implied by their trip-off-the-tongue latin name of Phylloscopus proregulus, these tiny eastern dynamos are similar in size and behaviour to our more familiar Goldcrest (Regulus regulus), and often find themselves side-by-side in feeding flocks working through the curled-leaf Sycamore canopy of a British east coast copse. 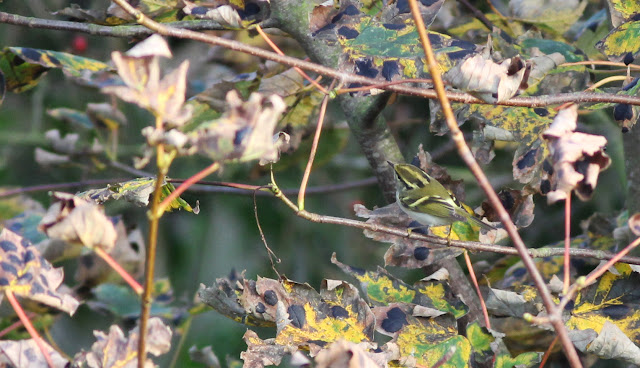 Despite hailing from so far afield, they're an annual vagrant to our shores in small numbers, and are thus very much an on-the-radar aspiration for east coast birders, especially after easterly winds in late autumn. It took me a few years to find my own here in Filey (who'd have put money on finding Brünnich's Guillemot and Iberian Wagtail first?!), but I've thankfully stumbled upon a handful of my own since, and each was as exciting as the last.