(for wildlife photos from the trip, scroll down beyond this post) 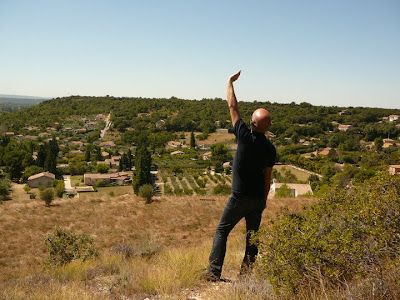 Luckily for us, our very dear friends Maryna, Richard and Frankie Fontenoy did the right thing earlier this year and found themselves an idyllic house in Caumont-sur-Durance, a village in Provence countryside about 15 km south-east of Avignon; figuring it'd be terribly rude not to visit before the summer was through, Amity and I wrangled the last week of August off work for sun-kissed frolics. A smooth and easy journey involving the Eurostar, a taxi-dash across Paris and a high-speed SNCF double-decker found us the proverbial world away within a few hours, a glass of the local poison in hand and six days of luxury exile ahead.

Being lucky enough to make plenty of birding trips these days (several of which are approaching fast this autumn), I was happy to heed the mantra gently hammered into me by the other half that this was resolutely not one of them; not least because of the wonderful non-birding (but very much bird- and nature-appreciating) company, naturally relaxing surroundings and the various other healthy(ish) distractions on offer.

But, with all concerned more than happy to accomodate my addiction, and willing to partake and / or cut plenty of slack, an easy balance was struck. Based in the village and with excursions most days, plenty of memorable avian highlights were woven into the itinery, deliberately and otherwise; and those highlights went something like this. 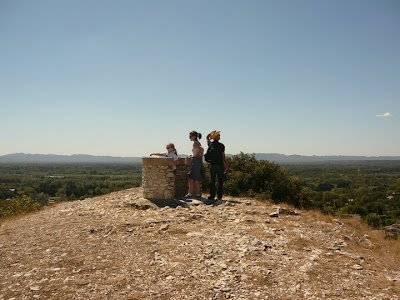 Many sojourns around the immediate environs of the neighbourhood - gardens, quiet lanes, small farmsteads - provided some great birds. In a foreign land where a freak in a straw cowboy hat with a paparazzi lens loitering in the bushes is understandably unusual, avoiding being shot / arrested / mauled by rottweilers required a little skill, but was ultimately worthwhile. Highlights included Sardinian Warblers (including a family in the garden), plenty of Serins, single Orphean and Wood Warblers, numerous, tame and entertaining Pied Flycatchers, odd Willow Warblers and Common Redstarts (and plenty of Black Redstarts), and very accomodating Western Bonelli's Warblers.

Dawn visits to Fontenoy Hill (ie, the upper end of the garden, affording 360 views of the surrounding ridges and countryside in the valley) added Ravens, migrating hirundines (including plenty of Red-rumped Swallows), and some memorable raptor experiences. Short-toed Eagles occupied the hill just opposite and performed beautifully both in the air and perched, a Bonelli's Eagle soared low and directly overhead one morning, and after experiencing a kettle of 20 odd Honey-buzzards appearing overhead from a nearby ridge the day before, a sky-watch during the first two hours of light on the 30th produced a stunning 187, all moving south-west down the river valley. 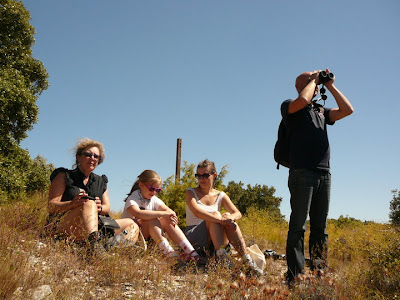 More Honey-bees were added in random locations such as over markets and another 20+ over Alan-pierre and Yvette's idyllic country pile a few miles east of the village, but the early, constant stream described above was a total surprise and a joy to observe. The latter location's neighbouring farmland and vineyards also hosted a European Roller (a personal first-for-many-years), initially spotted on nearby telephone wires while Frankie and I played table tennis in the searing heat of midday.

Two long, lazy afternoons were wiled away at the Camargue. An hour's drive roughly south, we spent our time at Saintes-Marie-de-la Mer, the region's capital (host to Van Gogh, Romany pilgrimages and religious aberrations amongst other things) for extended lunches and equally extended sessions on the beach and in the Med. With a couple of hours to steal nearby on each occasion, I explored the Etang, an expansive saline lagoon neighbouring the town, with Richard for company for the first session. 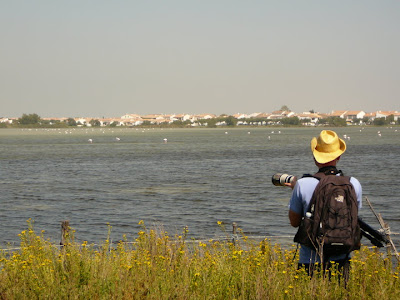 Essentially a huge tidal inlet with heat-haze views for miles to the north and west, the lagoon itself was populated by a certain pink local icon, and in serious numbers; small sections of saltmarsh and scrub allowed close views of Zitting Cisticolas, Great White, Little and Cattle Egrets, Sandwich Terns and other expected species, but a little patience paid off, with a Spoonbill, a Tawny Pipit, and - most impressively - flocks of Purple Herons appearing in the distance, circling high, approaching much closer, finding a thermal and then heading out en masse over the Mediterranean.

Further ostensibly non-birding excursions provided more highlights. An afternoon spent enjoyably (and somewhat comically) canoeing down the Sorgue at a (mostly) gentle pace was memorable for many reasons, including flocks of European Bee-eaters and Crag Martins hawking low above us, as well as plenty of Cetti's and Pied Flys, and a couple of close Kingfishers almost joining us in the canoes. 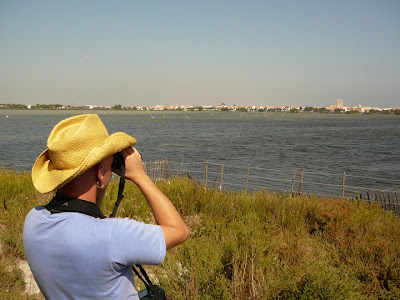 An evening visit to the village of Fontaine-de-Vaucluse, nestled into the lower crags of the stunningly beautiful ridge, multitudes of Alpine Swifts and Crag Martins coming low over the village to feed in the evening sunlight and returning in waves to the network of caves a little higher up in the cliff-face.

So a less single-minded, less focused, and oddly 'normal' foreign trip in the best possible sense, with fine food, wine, company and birds - a better way to begin an autumn of rich and varied travelling is hard to imagine. Love and thanks again to our wonderful hosts Maryna, Richard and Frankie - we look forward to your moving there permanantly and keeping our room prepared.....

(and thanks to Rich for the above photos)
Posted by Mark James Pearson at 12:58