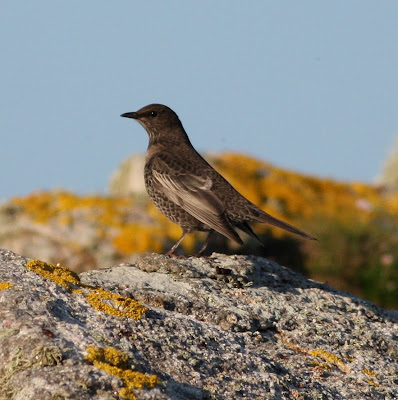 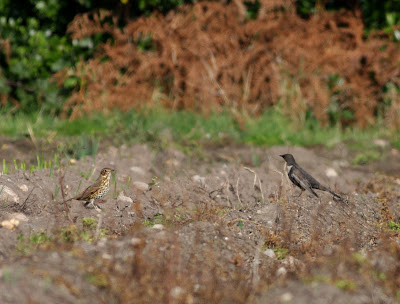 
More generally clear, sunny conditions with a cool ENE wind for the 12th, and as usual, multiple circuits and meanders around the beautiful isle from dawn til dusk; and although there was plenty to enjoy ornithologically and otherwise, little of it appeared to be new. A welcome and somewhat overdue Yellow-browed Warbler was the undisputed bird of the day, feeding tamely and entertainingly in the tamerisks by the tennis courts. 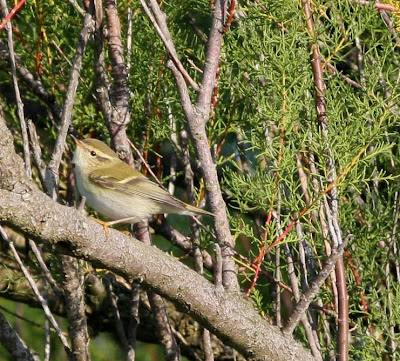 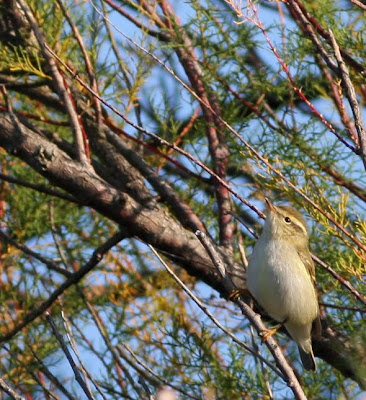 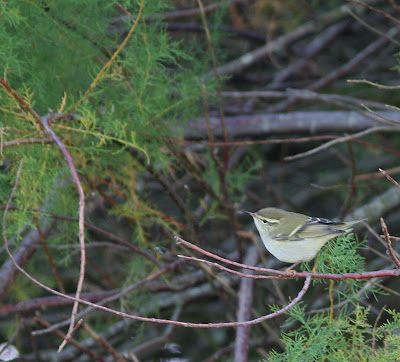 The conditions extended to the 13th, and once again despite plenty of birds (e.g. multiple Ring Ouzels, a couple of Wrynecks, plenty of Firecrests, the first Fieldfares in, the Yellow-browed Warbler still), few stood out and the clear skies had seemingly called time on incomers. As with previous days, however, it wasn't that predictable - a Dartford Warbler took up temporary residence in the gorse and bracken tangles of Wingletang, and once it was allowed to settle, gave great views in the late evening sunshine. 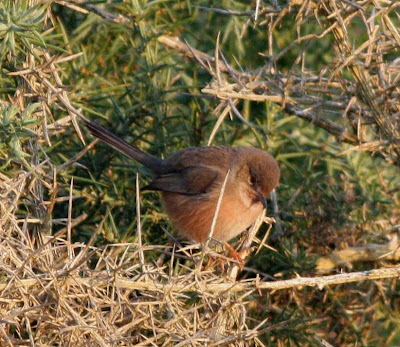 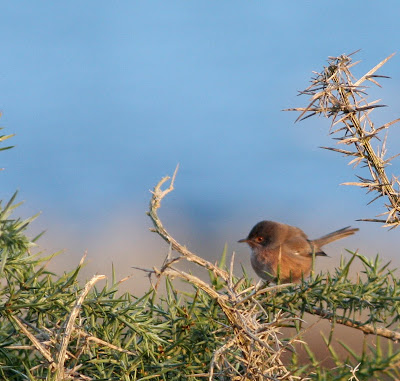 With only a couple of days left, we were all more than happy with the trip thus far; multitudes of migrants, plenty of scarcities, decent new birds on almost all of the previous six or seven days, plenty of surprises, and not least a laying to rest of last year's ghost. Also worth mentioning was the camaradarie on Agnes throughout the trip - as well as our team of six, at any given time there were a further eight to ten birders ashore for a week or more, almost all faithful to island, friendly, good value in the Turks Head and mutually supportive when grumbling about the invading packs of CB-bies from over the water (of which the less said the better). 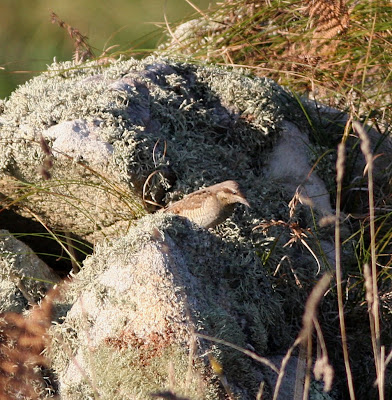 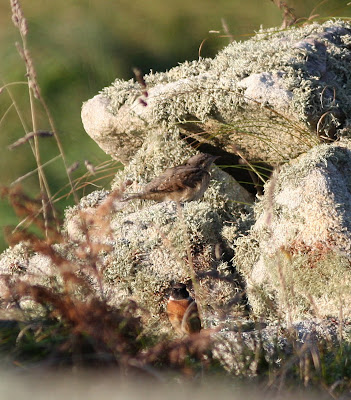 Overnight cloud, light north-easterlies and odd periods of drizzle boded well for the 14th, and there was evidence of new arrivals across the island - commoners and scarcities alike, and with birds appearing throughout the cloudy, dull and cool day.
Again, anything was possible, and attentions had been naturally focused on the easterly component over the last five days - bringing plenty to the north and east of the country and more than enough to our adopted isle - hence, thoughts of a newly-arrived Radde's, Bluetail, Olive-backed Pipit, or something bigger, prevailed. 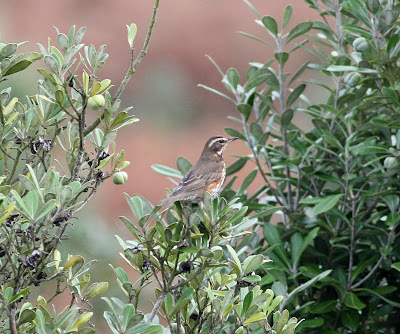 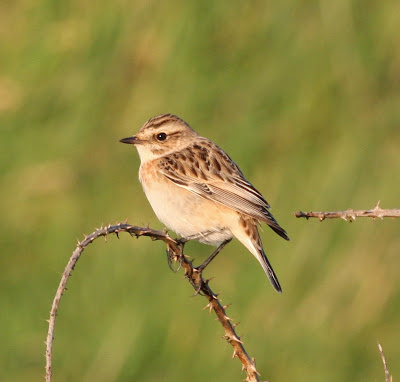 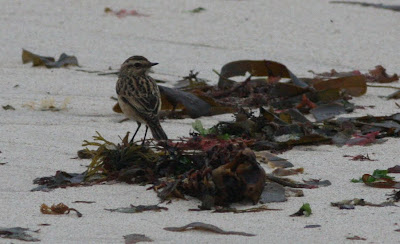 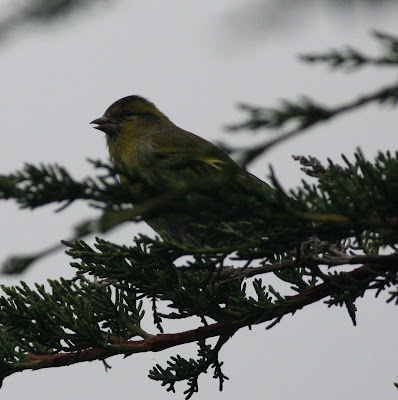 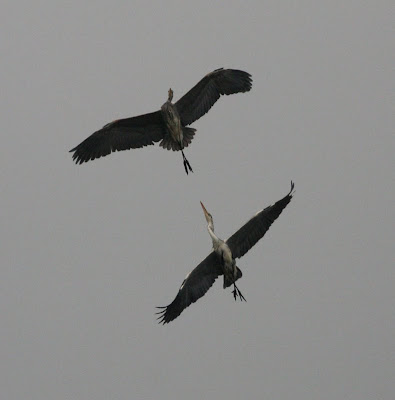 Which all went swiftly out of the window around midday, when a call from Brash - five minutes away on Castella Down, looking towards Troytown Farm - included the magic words red, eyed and vireo in the correct order. In the area within a couple of minutes, the bird had quickly evaporated, and instead of joining Brash and Derby where they were, I took a chance on the available habitat around a holiday cottage nearby.

Occupied by a holidaying birding couple we'd spoken to several times over preceding days, I knocked on the door, told them the news, and suggested searching within their garden area; Robin (half of the above couple) mentioned that the garden backed onto a private orchard, which seemed like a perfect place to start. Within thirty seconds I was looking through a gap into the orchard through a pittosporum hedge - and in a small dead apple tree, about three metres away, sat a Red-eyed Vireo. 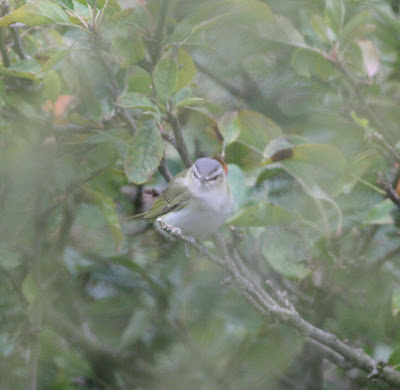 So it's one of the commonest / most predictable nearctic passerine vagrants this side of the Atlantic; so it's not a Dendroica; lalalala. Having never been a twitcher, and never having visited the east Atlantic coast in peak autumn migration time (until last year), this was my first American landbird on this side of the pond - hence, a very special occasion. 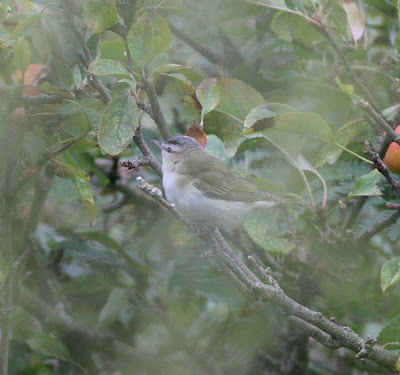 That it was found by our team, that at least two perfect weather systems resolutely failed to provide any American vagrants in preceding weeks, that it appeared after five days of easterlies, and that I'd been watching them not two weeks earlier on Martha's Vineyard just served to sweeten the occasion further.

A few seconds of perfect views later and it was gone; a few seconds later, back into another apple tree a couple of metres further away, and gone again; and finally, mercifully, back a third time, in posession of a large insect, and sticking around long enough to get Robin onto it (and thus comfortable enough to try for a few record shots). 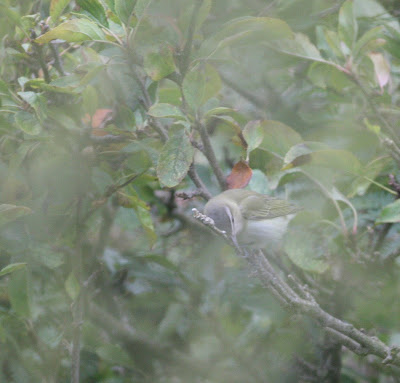 Having made whispered calls in the meantime, the team arrived within a minute or two of its refinding, but despite searching it wasn't relocated in the orchard; it was apparently seen briefly and at distance a couple of times later on in the original hedge, but then disappeared. (Not seen the following day, presumably the same bird then appeared in the Parsonage, where it remained elusively for several days from the 16th).

When it had arrived on the Agnes, and where it'd previously made landfall, are obviously interesting and unanswerable questions, but that it was found in what is effectively the most south-westerly (and therefore 'first') hedgerow in the U.K., and that it quickly disappeared and moved to more suitable habitat (for a several day period), strongly suggests it was fresh-in; from where, who knows, but more than likely off-the-boat (so to speak). 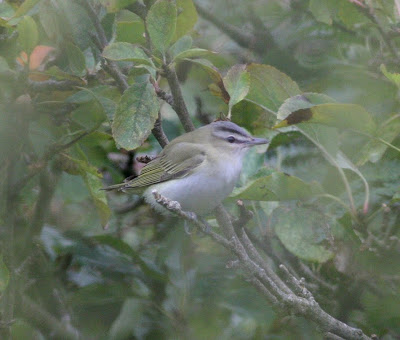 Having been lucky enough to enjoy the bird before the rabid hounds of pager hell descended en masse (at least the boats made some brass this year), I retreated to the rest of the island - which was predictably and wonderfully bereft of anyone apart from the odd resident - and bumped into a second Yellow-browed Warbler feeding near the old obs; allowing me to sit directly underneath it as it caught insects inches above my head, it was a pefect realisation of what I'd hoped for on Agnes - from America to Siberia in a few hundred metres.

The brief attentions of a sweating hoard of over-equipped sheep huffing and puffing after the Vireo - "What are you looking at?" / "Yellow-browed" / "Oh fuckin hell" followed by swift mass departure - only served to amplify how wonderful it is to find your own birds, and why i'll never be a twitcher. Ever.

And the day wasn't over yet; in his own pursuit of the Vireo, Derby had stumbled on a Bluethroat in a small field in Troytown, which Graham dutifully flushed several times for the assembly - a bird I haven't seen in the U.K since the days when they were as predictable as wife-beating back at Flamborough. 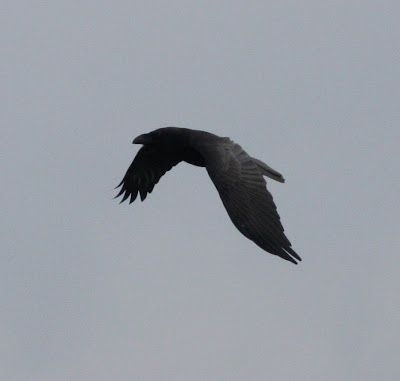 The 15th - a final full day in the field under similar conditions - had plenty of birds and many new arrivals, but nothing to compare, hence only vague recollections.

A wonderful two weeks on a mind-blowingly beautiful, and bountiful, adopted patch - multitudes of migrants, several rarities, a hatful of scarcities, and a star bird to round off the trip. St. Agnes is dead, Long live St. Agnes. 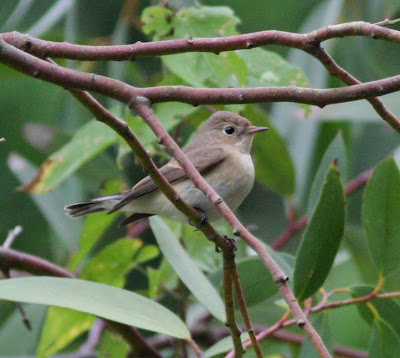