So, yesterday I watched a Black-browed Albatross glide by a few minutes from my front door, today is World Seabird Day, and.... well, I need no further reason to justify procrastinating by messing about with a vaguely thematic post here.


Regular readers will know that, since moving back up to the Yorkshire coast eight years ago, sea-watching has been a hugely important and enjoyable part of my local birding. For the first five years I was stubbornly rooted to Filey for this, and - bar out-of-county/country trips - pretty much all other aspects of my birding; less so in these last three years (when a more holistic and less site-obsessive approach has won out), but still, the majority of my sea-watching is still done here in my hood. And looking back, what a fine time I've had of it.....


I've been lucky enough to have had incredible seabirding experiences in many other places over these last few years, too; over the bay at Flamborough and Bempton, out on the waves of the North Sea off our beloved Yorkshire coast leading many a fine YCN pelagic, off the south-west of Ireland in the thick of petrels and shearwaters.... but for the sake of brevity and clarity, I'll keep this one specifically to Filey, my home patch for the last eight years. Alright, in no particular order, then, here's four of the best....


Four diver species in 45 minutes
1st December 2014 was one of those mornings you very nearly don't bother, and didn't look too promising, but with late migrant Snow Buntings, Blackbirds and a Mistle Thrush on Carr Naze (the 'topping' of the Brigg) and a grunting flyover Tundra Bean Goose on the way down the slope (a local rarity), the omens were good; as was the back-up, with a classic cold winter's selection including Long-tailed Duck, Little Auks, a late Pom Skua and Mergansers.


But somehow nailing all four diver species, including a bounding, banana-conked White-billed, in an unforgettable 45 minutes was something else entirely. More here. It's not all about the quick wins, however....


Ten Tubenoses in eight years
If you could've guaranteed me I'd have self-found ten species of tubenose in my time here at Filey, well, I'd have paid you handsomely, probably with my soul. But happily for me, that's a fantasy that (as of yesterday) became a reality without the need for such deals. Can you name them....? Well, from the smallest up, European Storm-petrels have played a wonderful part of most years here - usually in the scenario of summertime catching sessions on the Brigg, but also as (rare) sight records as they battle, seemingly against all odds, into gale-force winds and over towering white horses. Magical little birds. More, for example, here.


I've been fortunate to find a decent haul of Leach's Storm-petrels over the years, and they're the far more likely sight-record of the two here - but they're still gold dust comparitively speaking, and they always make you work for them (think bone-chilling northerlies and sea-spray....). We were also fortunate enough to catch one a couple years back, making for a perfect comparison with Euro Stormies in the hand.


Shearwaters are just about as good as it gets, characterising many of the best seawatches, whether in quantity, quality or both. Manxies and Sooties are the standard pair, and I've been lucky to witness many, and indeed dramatic movements, of both. Balearics, while globally threatened, are (counter-intuitively) becoming more regular, and I maybe average ten to 15 a year these days, with multiple day counts not now uncommon. Cory's are rare - rarer than many assume them to be - but fortunately for me, I've found three; Great is even rarer, and I finaly nailed my first one here last autumn. 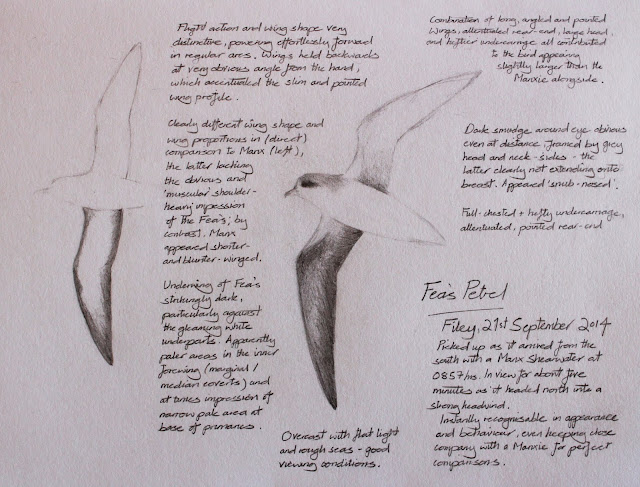 Including the ubuiquitous (but ever-wonderful) Fulmar, that's eight, leaving two... firstly, a bird I'd dreamed of finding for years, in the exact circumstances it actually in which it happened - foreboding skies, a strong northerly, rolling seas, lines of shearwaters.... and a Fea's (type) Petrel scything through the wind like a knife through butter. A post from that memorable day, which included many other treats, can be found here. And finally, then, there's.... 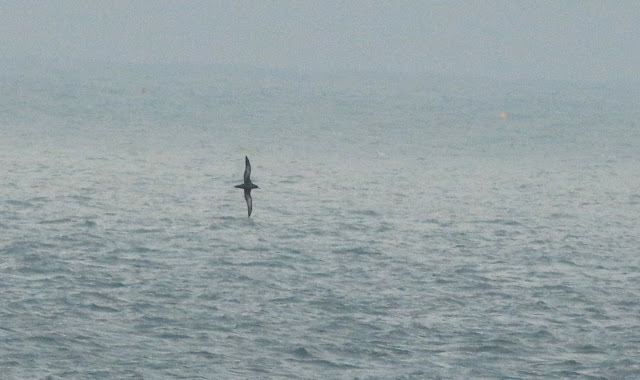 Yesterday's Black-browed Albatross
... which was a thrill, for many reasons. As mentioned, I've got a history with this species here, but in the spirit of focusing on the positive, well, who cares now I've found one? In ideal circumstances, too, at my favourite spot, with a good friend who I managed to get onto it as it sailed past all the local iconic landmarks that are imprinted onto my mind's eye. Perfect. More here. 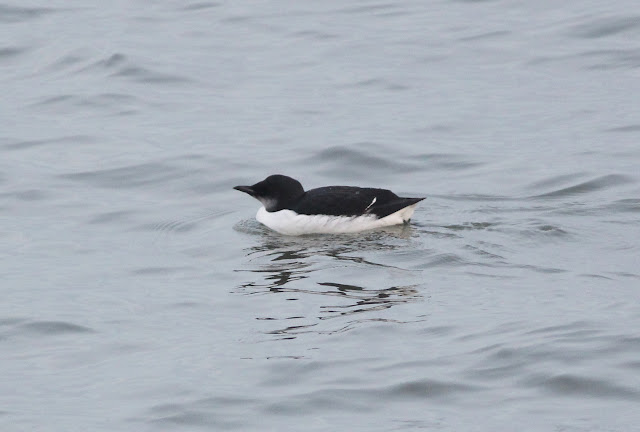 ..... and a heaven-sent Brünnich's Guillemot
And then there's those days when everything just goes perfectly, and perfectly insane. My memories of that evening are as clear as a bell; as you might expect, when you stumble upon a dream find - a first for Yorkshire, and a first for (mainland) England - swimming innocently past you at the end of your road. The full story is here.


I can even remember the phone call to my much-missed friend Martin, who - of course - just made a unique event even more of a joy. Luckily for me I've gone on to top even the Brünnich's from a rarity perspective (see here), but I'm not sure I'll ever have a more surreal, euphoric birding experience locally as this.

Posted by Mark James Pearson at 21:11