In the bleak mid-winter, hope for storms or big freeze-ups; at least in London town. We've had an endless procession of the former over the last few weeks, of variable severity, with anti-cyclones crashing in from the Atlantic and up the channel; with displaced seabirds scattered liberally across the south and west, local water bodies are always worth a shot.

Maintaining a vigil at our two relative duck-ponds known as Stoke Newington Reservoirs has yet to produce such a scarcity (one day... one day), and so with a Leach's reported further up the valley on the oceanic William Girling Reservoir, an opportunity to cover the north side of Walthamstow Res was taken. Checking the increasingly inaccurate BBC weather at midnight, sunshine and stillness were promised all day, after the preceding storm-force south-westerlies and rain. Unsurprisingly in retrospect, the wind remained bitingly strong and cold, almost blowing away 'scope and tripod on the banks of Lockwood, and bringing in sharp, cutting showers. 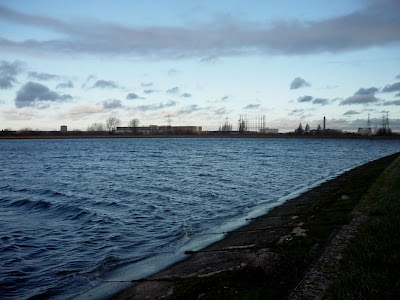 The BNP invade from their nearby Essex stronghold

Which wouldn't have been an issue should the conditions have provided a glittering reward, in the shape of a petrel, phalarope or even skua maybe; if not, more realistically, a quality duck amongst the wintering throng would have done just fine (as would a wader or an errant passerine along the banks). Dutifully checking and double checking everything that moved (and most things that didn't), the meagre highlight was a total of five Goldeneye - quality in a sense, but entirely predictable here at this time of year.

Waders were confined to two Green Sands on the flood relief channel, and this is probably the first time ever even a local Little Egret couldn't be bothered to put in an appearance. Fortune favours the brave, but sadly not the stupid. Maybe that running around after other people's birds ('twatching' or something?) is worth a .... only kidding.
Posted by Mark James Pearson at 23:43