And so to the third and final summary of September's exploits here on the patch. Unlike the preceding post (covering the ten days over mid-month), this one doesn't involve quite the same attention to detail, it's highlights being somewhat less equally scattered.

After a very entertaining and productive week on the land, the forecast for 21st was all about the sea. Strong northerlies in late September immediately conjure up rose-tinted images of skuas deftly harrying unlucky gulls or racing by at lightning speed, lines of shearwaters arcing effortlessly over breaking white horses, and a wide cast of other hardy seafarers rapidly filling up the page. As it happened, it was even better, and soon turned into one of those sessions that you know is destined to become a classic long before it ends.


With the wind howling and the sea raging, it was particularly good to have the protection of the hide, and almost immediately the action began. Sootys were an almost constant presence as they cruised into the head wind, outnumbering Manxies by three to one over the course of the morning; Skuas were also on the move, often in small, sudden surges, with initial frustration at their distance and the conditions (and thus having to leave fair proportion unidentified) steadily turning to satisfaction as their identities became steadily clearer. 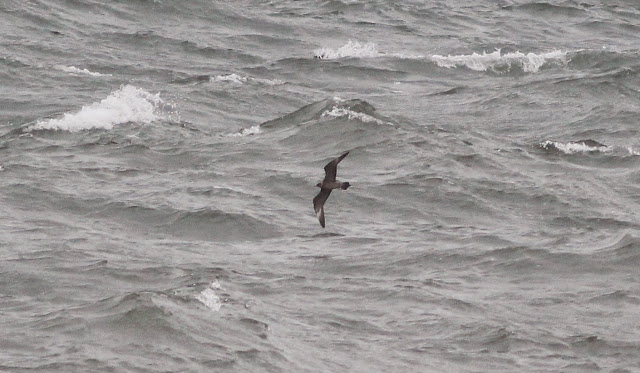 As is sometimes the case on days like these, some species tend to follow certain flight-lines, and most shearwaters were following one of two as they rounded the Brigg and headed north - a fairly distant one (perhaps 800/900m out), and a closer one (around 450/500m). With both firmly established in my field of view, the radio crackled into life, with Mark at Buckton relaying news of a Fea's-type Petrel having passed Flamborough 'about 15 minutes ago'. With no mobile or internet coverage in the hide, we were otherwise blissfully unaware of what may or may not be approaching us; as it happened, it may not of mattered (easy to say in retrospect), but it surely did no harm to be forewarned of such a tantalising possibility hopefully on its way.


A surge of activity from the south followed, including the first confirmed Long-tailed Skua of the morning, a succession of Sootys, a Velvet Scoter, a handful of Little Gulls, and a cracking Blue Fulmar. But as the clock ticked, hopes faded - for other observers, at least - with more than 30 minutes having passed since the bird had left Flamborough's airspace. I'd no intention of giving up quite so easily however, and about five minutes later, what should appear in my 'scope - luckily along the nearer shearwater flight-line, and in close company with a single Manxie - but a certain star Pterodroma.


Thankfully I'd changed lenses from the 30x wide angle to the 25-60x zoom in anticipation, and - despite the adrenalin and excitement - was able to close in for intermittently good views as the bird followed a mercifully relatively predictable path through the waves. At no more than 450m for the first while, the bird (as expected) followed the line adopted by preceding shearwaters and became steadily more distant, but thankfully not before I was able to get everybody else onto it; over the course of a good five minutes or so, purring and yelping were the commonest sounds in the hide before the bird eventually disappeared to the north.


Aftering venturing outside to get reception and relay the news as quickly as possible, it was back to the hide, and seven and a half hours later, final counts included nine Long-tailed Skuas, 141 Sooty and 63 Manx Shearwaters, two Velvet Scoters, the first Pink-feet of the season, a Blue Fulmar, good counts of wildfowl & Red-throated Divers and various other sundries. 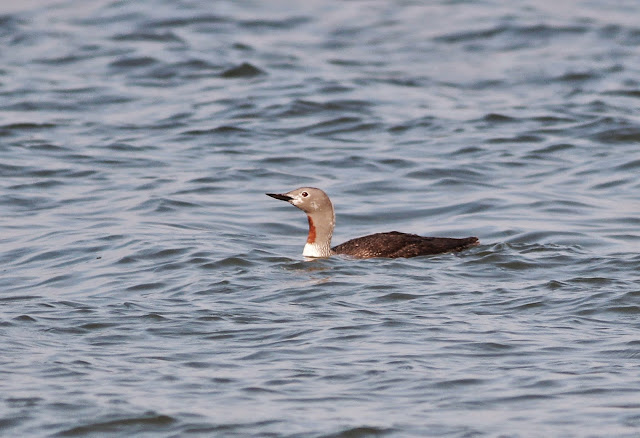 The following days were, as might be expected, a little anti-climactic, but not without interest on the sea. The morning of 22nd was relatively quiet, but a well-timed evening seawatch produced a Balearic Shearwater, another Long-tailed Skua, more Sootys, Little Gulls, and commoner skuas and terns - plus a flock of 24 Barnacle Geese, following on from two other flocks earlier (of 34 and 18), totaling 74 for the day of a rare and unpredictable passage migrant.


With unfavourable winds (mainly from the west or south-west) effectively killing off all hope of action on the land, the sea became the default option, and while not reaching the same heights, plenty of to enjoy in the shape of odd Long-tailed and Pomarine Skuas among fairly healthy tallies of their commoner congeners, decent Sooty movements, an increasing variety of wildfowl, the aforementioned movement of Barnacle Geese alongside the first week of Pink-foot passage, and transient and occasionally very impressive assemblages of Little Gulls (with up to 700 on 24th).


While expectations were suitably low on the land, persistence paid off on the last day of the month, when amongst a roving passerine flock in the Top Scrub, a vocal Firecrest announced its presence (only the second of the year of a less-than-annual species here); a nice end to what became a pretty quality month overall. 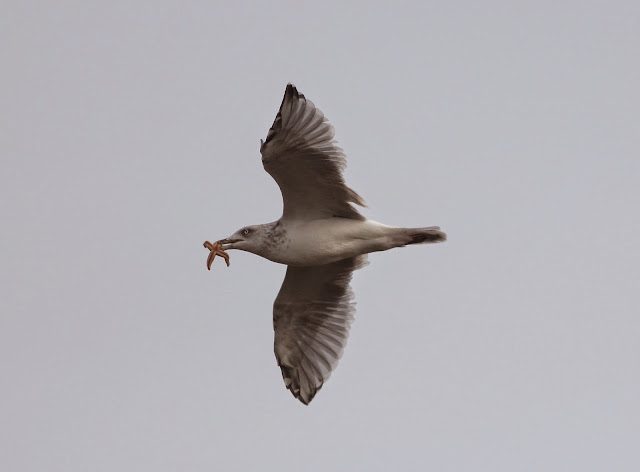 Posted by Mark James Pearson at 21:39