Invasion of the Scandinavians 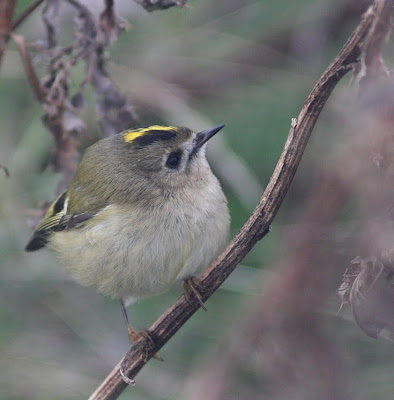 23rd: Thick fog, poor visibility, and an excellent autumn day on the patch. The weather charts for this week - beginning Monday (yesterday) and continuing through until Thursday or Friday - have been looking very good for some time, and against all expectations, they've remained just as encouraging right up to the wire.

Otherwise engaged for yesterday, it could have been much worse; although there was an impressive influx of commoner late autumn species, two Yellow-browed Warblers were the pick, and hence a relieved exhalation with everything to play for going into today and onwards. 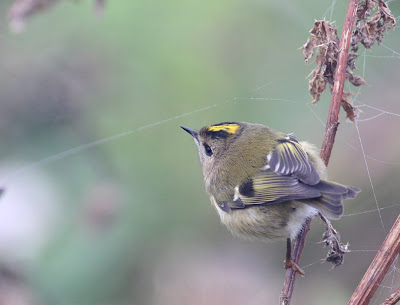 Come this morning, into the pea-souper, and into multitudes of birds, fresh-in from over the North Sea and beyond. While observing was challenging to say the least, it was a day to appreciate and soak up the overall experience. Hard to do justice to, but it was one of those days where the natural phenomenom of migration not only played out but took over, and it was a privilege to be here to enjoy the show.

The hedgerows, scrub and secondary woodland were alive with birds - swarms of Goldcrests feeding relentlessly and delicately through the shrubs and trees, allowing ridiculously close approach as only they can; rowdy flocks of thrushes, raining from the skies and weighing down the hedgerows; Robins hopping out at every few paces; and Bramblings, Chaffinches, Reed Buntings, Blackcaps and Chiffchaffs sprinkled throughout. 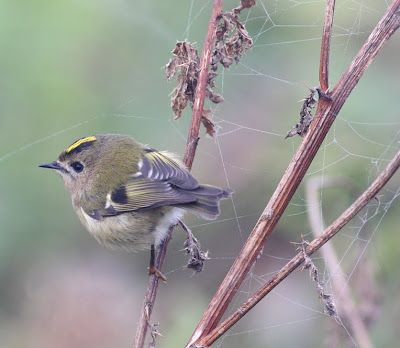 Goldcrests - hundreds graced us with their presence today

Meticulously sifting through the 'crests, although fruitless (so far) in the sense of finding a rarer gem, was a treat in itself; especially when it involved standing within the foliage, pishing gently, and being instantly surrounded by numerous doe eyes at point blank range, inquisitively staring back and wholly fearless. 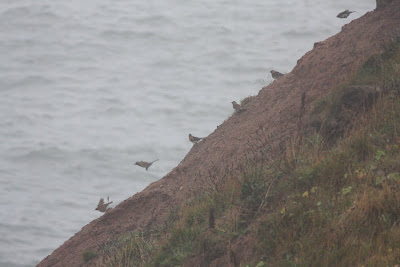 Redwings and Fieldfares on the cliff edge

Onto Carr Naze, the grassy plateau crowning the Brigg, and into an almost otherworldy scene dominated by impenetrable fog, soundtracked by a combination of waves crashing from all points below and the constant wheezes, chacks and tseeps of myriad thrushes, funneling along the peninsula in squadrons hundreds strong, swirling in tandem with the fog and  descending onto all available dry land. 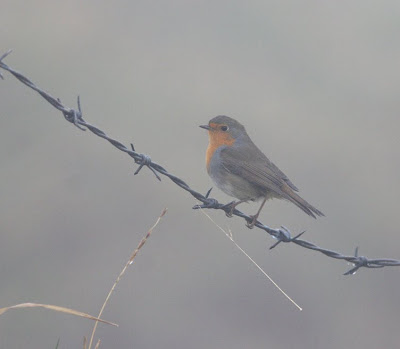 The best day so far this year for Robins, with dozens present across the coastal strip

Fieldfares and Redwings - comfortably four figures of each - dominated, with Blackbirds not far behind, and a healthy sprinkling of Robins, Goldcrests and Bramblings (plus odd chiffchaffs, Reed Buntings and Blackcaps), making a scene to savour, especially for the hour or more when, miraculously, I had the place to myself. 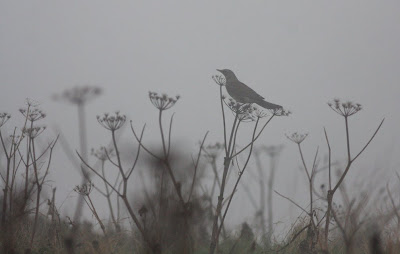 Four Ring Ouzels and a couple of Mistle Thrushes made it a six-thrush day, but the rarity never materialised; which matter not a bit on a day with such pleasures. And there's always tomorrow, or Thursday....
Posted by Mark James Pearson at 21:49